Current temperature trajectories are on par with or exceed the IPCC’s dangerous projections (Figure 1). Acting as the lungs of the biosphere, over tens of millions of years the atmosphere developed an oxygen-rich carbon-low composition, allowing the flourishing of mammals. The anthropogenic release to the atmosphere to date of more than 600 Gigaton of carbon (GtC) is reversing this trend, threatening to return the Earth to conditions which preceded the emergence of modern life forms, including humans. Climate projections for the mid to late 21st century by the IPCC (models A1B and A2)  indicate mean global temperatures rising to near 3 to 4 degrees Celsius above mean 1880-1920 temperatures. Concomitantly a transient cooling occurs in high latitude oceans due to flow of cold water from melting Greenland and Antarctic ice sheets. These developments would lead to un-inhabitability of large parts of the Earth and to a further rise in extreme weather events, not least from hurricanes around the Pacific Rim and Caribbean island chains.

Tracking toward 500 ppm CO2 a shift is taking place in the state of the atmosphere away from the conditions which allowed farming some ~11,000 years ago and from conditions which allowed the emergence of Homo erectus 1.8 million years ago. In denial of the basic laws of physics, specifically of black body radiation (Stefan-Boltzmann, Kirchhoff and Planck laws), and their manifestation in the atmosphere-ocean-land system, world “leaders” and a complicit media are presiding over a rise of carbon emissions at a rate of 2 – 3 ppm CO2 per year, shifting the chemistry of the atmosphere at an unprecedented rate since at least 56 million years ago, when a hyperthermal catastrophe and mass extinction of species took place. 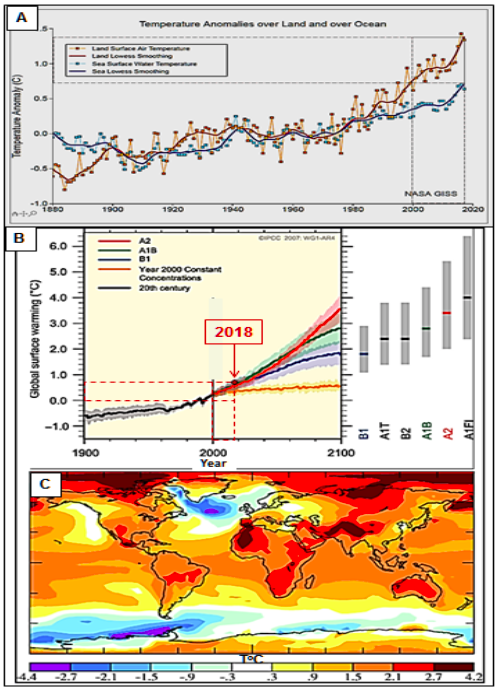 About 1980 when the dangerous rise in atmospheric greenhouse gases to 340 ppm CO2 was realized, it may have still been possible to attempt effective mitigation by means of (A) sharp reduction of carbon emissions, and (B) attempts at down-draw of CO2 through reforestation, soil improvement (biochar), CO2 capture using sea weed farming, CO2 reaction with basalt and other methods. This has not happened—instead, a plethora of economic and political panels formed, mostly to the exclusion of climate scientists, counting the costs of mitigation and adaptation, namely the price of the Earth.

With estimated carbon reserves in excess of 20,000 GtC (well over 20 times the CO2 content of the atmosphere), further emissions can take the atmosphere to >1000 ppm CO2, namely to Early Eocene (about 50 million years ago) or Mesozoic-like greenhouse Earth conditions, when large parts of the continents were inundated by the oceans. As stated by the renown oceanographer Wallace Broecker in 1986, “The inhabitants of planet Earth are quietly conducting a gigantic experiment. We play Russian roulette with climate and no one knows what lies in the active chamber of the gun“.  Where WWII sacrificed millions in gas chambers, global warming threatens to destroy billions, on the strength of an “economic” Faustian Bargain.

Extreme greenhouse levels and high mean temperatures existed on Earth at several stages, but mostly the transitions between these states and cold or ice ages were gradual, allowing many species to adapt. By contrast, when climate changes were abrupt, such as due to asteroid impacts or global volcanic eruptions, many species could not adjust, with consequent mass extinctions. The extreme rate at which anthropogenic global warming is taking place means that only the hardiest species may survive, including grasses and insects and possibly species of birds, descendants of the fated dinosaurs. Human survivors may endure, as they have during the extreme climate upheavals of the glacial-interglacial cycles, which in some instances allowed them to outlast the most adverse conditions.

The battle between life-enhancing and death-inducing agents in nature, symbolized by the Brahma-Vishnu-Shiva trinity, has always existed. At present, some, in a world buzzing with witless twits and faceless books, some 73 years following the carnage of WWII, the rise of fascism can only lead to yet another world war, this time nuclear.

Further experiments with the Earth are underway. Once the Hadron Collider has been deemed to be ‘safe’, further science fiction-like experiments yet to be dreamt by ethics-free scientists may or may not result in a black hole. Little doubt exists however regarding the consequences of the continuing use of the atmosphere, the lungs of the biosphere, as an open sewer for carbon gases.

From the Romans to the third Reich, the barbarism of empires surpasses that of small marauding tribes. In the name of their gods, or freedom, or progress, or human rights, empires never cease to bomb peasants in their small fields. It is among the wretched of the Earth that true charity is common, where empathy is learnt through suffering.

Humans live in a perennial realm of perceptions, dreams, myths and legends, in denial of critical facts. Existentialist philosophy offers a perspective into, and a way of coping with, what otherwise defies rational contemplation. Going through their black night of the soul, members of the species may be rewarded by the emergence of a conscious dignity devoid of illusion, grateful for the glimpse into nature for a fleeting moment: “Having pushed a boulder up the mountain all day, turning toward the setting sun, we must consider Sisyphus happy.” (Albert Camus, The Myth of Sisyphus, 1942).