There are battlefields in Syria, Ukraine, Yemen, and elsewhere, but given the state of corporate media, perhaps the most consequential battle now being fought is for our minds, says Patrick Lawrence.

After reading The New York Times piece “The Plot to Subvert an Election” I put the paper down with a single question.

Why, after two years of allegations, indictments, and claims to proof of this, that, and the other did the newspaper of record—well, once the newspaper of record—see any need to publish such a piece? My answer is simple: The orthodox account of Russia-gate has not taken hold: It has failed in its effort to establish a consensus of certainty among Americans. My conclusion matches this observation: The orthodox narrative is never going to achieve this objective. There are too many holes in it. 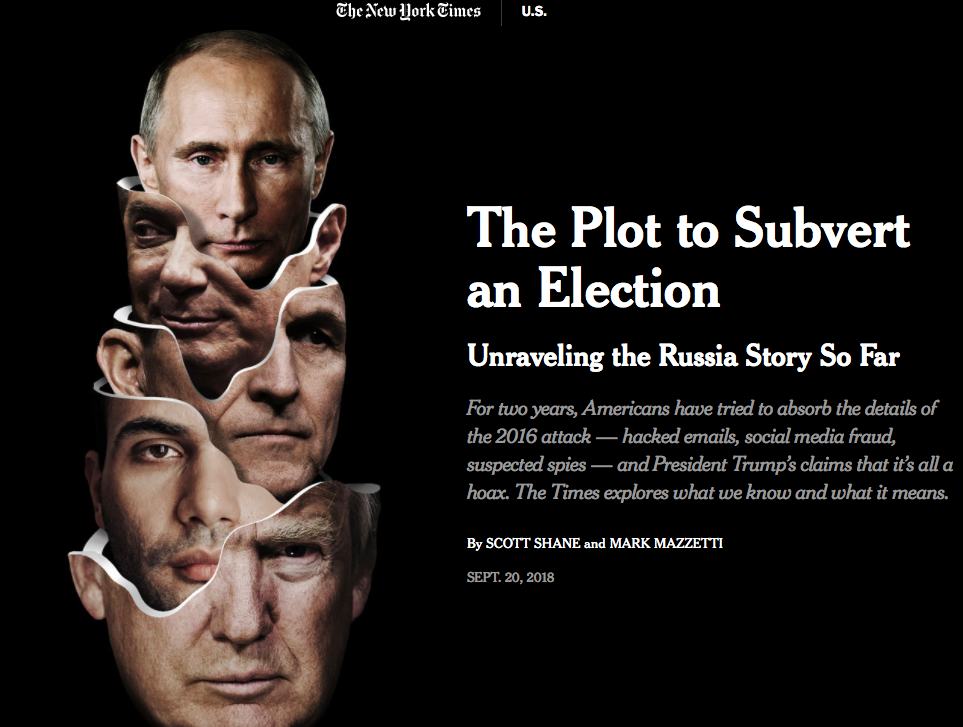 Screengrab from The New York Times

“The information age is actually a media age,” John Pilger, the noted British–Australian journalist, remarked during a symposium four years ago, when the Ukraine crisis was at its peak. “We have war by media; censorship by media; demonology by media; retribution by media; diversion by media—a surreal assembly line of obedient clichés and false assumptions.”

Pilger revisited the theme in a piece last week on Consortium News, arguing that once-tolerated, dissenting opinion has in recent years “regressed into a metaphoric underground.”

There are battlefields in Syria, Ukraine, Yemen, and elsewhere, but perhaps the most consequential battle now being fought is for our minds.

Those who dispense with honest intellectual inquiry, healthy skepticism of all media, and an insistence that assertions require supporting evidence should not win this war. The Times piece by Scott Shane and Mark Mazzetti—two of the paper’s top-tier reporters—is a case in point: If the Russia-gate narrative were so widely accepted as their report purports, there would have been no need to publish such a piece at this late date.

“Professional” News Gathering: The Syrian Observatory for Human Rights is a Tool of Western Propaganda

Many orthodox narratives are widely accepted however among a public that is not always paying attention. The public too often participates in the manufactured consent. Usually it take years for the truth to be widely understood. Sometimes it comes when the U.S. admits it decades later, such as the role of the CIA in the coups in Iran and Chile. Other times it comes through admissions by former U.S. officials, such as former Defense Secretary Robert McNamara about the Vietnam War.

Even Recent Narratives are Fraying

There are more recent examples of official narratives quickly fraying if not starting to fall apart, though Establishment media continues to push them.

For instance, there are serious doubts about who was responsible for alleged chemical weapons attacks in Syria. The most significant was in Eastern Ghouta in August 2013 followed by attacks in Khan Sheikhoun (April 2017) and Douma (April 2018).

The corporate media accounts of each of these attacks have been countered with persuasive evidence against the prevailing view that the government of Bashar al–Assad was to blame. It has been provided journalists (Seymour Hersh), a scientist (Theodore Postol), and on-the-ground correspondents and local witnesses. These reports are subject to further verification. But by no means do official narratives stand without challenge.

There is also the case of Malaysian Flight MH–17, shot down over Ukrainian territory in June 2014. The official report, issued a year later, concluded that the plane was downed by Ukrainian rebels using a Russian-supplied missile. The report was faulty from the first: Investigators never visited the site , some evidence was based on a report produced by Bellingcat , an open-source web site affiliated with the vigorously anti–Russian Atlantic Council, and Ukraine was given the right to approve the report before it was issued.

Last week the Russian military disclosed evidence that serial numbers found in the debris at the MH–17 crash site indicate the missile that downed the plane was produced at a Soviet military-production plant in 1986 owned by Ukraine. Let us see further verification of this evidence (although I seriously doubt any Western correspondent will seek any). The official report of 2015 noted the serial numbers, so we know they are authentic, but it did not use them to trace the missile’s provenance.

There is also the seriously muddled case of the poisoning of the Skripals in Britain.  Why hasn’t the Western media dug into this story rather than accept at face value the pronouncements of the British government?

A month ago I lamented the damage Russia-gate has done to many of our most important institutions, the press not least among them. What is the corporate media thinking? That once President Trump is dumped, all will return to normal and professional standards will be restored? One can also argue the reverse: that adversarial journalism has returned to the White House beat largely out of personal animus towards Trump and that it will disappear again once a more “normal” president is in office.

As Pilger put it, “This is a seismic shift, with journalists policing the new ‘groupthink,’ as [Robert] Parry called it, dispensing myths and distractions, pursuing its enemies.”

In other words, Establishment journalism has shifted far afield from its traditional ideals of non-partisan, objective reporting and is instead vying for your mind to enlist it in its agenda to promote American interests abroad or one party or the other at home.

We can’t let them get away with it. Our minds are our own.

Patrick Lawrence, a correspondent abroad for many years, chiefly for the International Herald Tribune, is a columnist, essayist, author, and lecturer. His most recent book is Time No Longer: Americans After the American Century (Yale). Follow him @thefloutist. His web site is http://www.patricklawrence.us. Support his work via www.patreon.com/thefloutist.