After the assassination of German diplomat Ernst Vom Rath in Paris by a 17 year old Polish Jewish boy, all hell broke loose November 9th and 10, 1938 in Germany. Hitler’s SA Nazis, along with a multitude of German civilians went on a rampage never seen before of that magnitude. They burnt to the ground 267 Jewish synagogues, ravaged 7,500 Jewish owned businesses, and most horrific, beat, tortured and even raped. Thirty thousand Jewish men and boys were rounded up and shipped to concentration camps, many never to be seen again. Blaming the victim for all this, the German government issued a one billion Reich mark atonement tax on the Jewish community. Laws were then passed to ultimately deny German Jews their basic citizenship and rights as human beings. The pogroms went on into Austria as well, with Austrian Nazis and their sympathizers doing equally horrendous deeds. As historians of any note fully realize, Kristallnacht paved the way for the Final Solution, replete with  gas chambers and crematoriums. These anger filled thugs could have easily chanted ‘Jews won’t replace us’ as they did their dirty deeds.

Almost 80 years later, the usually serene college town of Charlottesville, Virginia heard the chants of ‘Jews won’t replace us’. We all saw and heard the marchers that night carrying those Nazi like torches and chanting that phrase… over and over. Our fine president, after surmising all that occurred  between what the media labeled the Alt Right and Alt Left, was more than charitable. He simply said that there were ‘nice folks’ on both sides of the skirmishes. I for one did not hear or see the following: Jewish folks working for the Trump administration, Jewish supporters of Trump and the Israeli government showing outrage at his remarks and handling of it all. Imagine for a minute if it were a march by Palestinian Americans carrying those torches and shouting that phrase. Imagine if it were a march of Black Americans shouting ‘Whites won’t replace us’. Just you imagine.

‘Focus’ on the Neo Nazi Revival

My column is not just about white supremacists spreading their hate. Yes, it includes that of course. No, my column is about the legitimization by those in elected office of this mindset. Once we all sit back and say nothing to these actions or really inactions, we give them license! As with the 2002-03 illegal and immoral invasions and occupations of Afghanistan and Iraq, too much silence by too many Americans just gives the evil ones the green light. Evil is defined in many ways. I like this one: Something that brings sorrow, distress or calamity. As the great Ed Norton said to Ralph Kramden in the Honeymooners: “Maybe the phrase fits Ralph.” 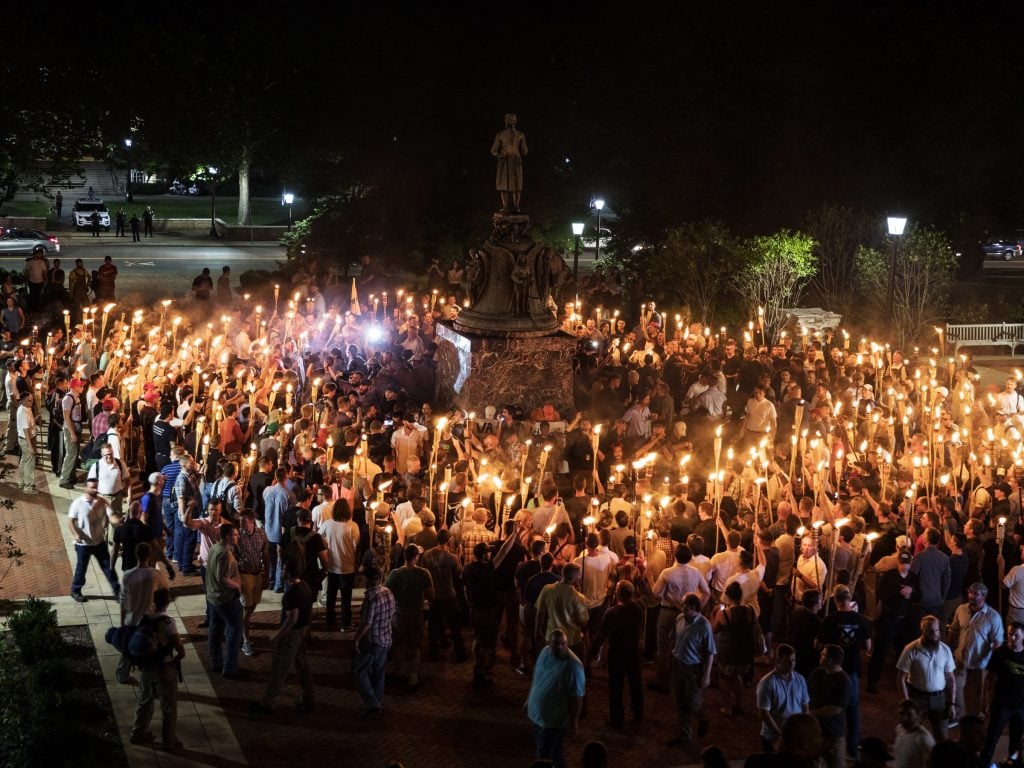 When we as a culture allow such terrible actions to be conducted, the ‘skies that limit’. When some of our police officers (a small minority) start shooting unarmed people, many who happen to be Black, and there is not enough outrage by the majority of us… sadly the signs point to a coming ‘Police State’. When peaceful protest is restricted or now even taxed with fees, that ‘Police State’ is around the corner.

You know, look at that Charlottesville incident closely. By many accounts the local police were actually told to ‘Stand down’ as the two opposing protest groups were nearing each other. Why? Was it to allow for what then happened? The more there is such conflict and street violence, the more those who run things can use for a coming ‘Police State’. All Trump did was exacerbate things by giving a pass to those Neo Nazis. The same thing is happening throughout Europe, as more countries are experiencing  this new Neo Nazi upsurge. Over there the main focus is on all those refugees from places like Libya, Syria, Iraq, Afghanistan, Yemen to name but a few. Why are there so many refugees? Well, ask yourself if our government, from Bush Jr. to Obama and now to Trump, did not intercede in those nations to cause such chaos? Sadly, for those of us who truly love our nation, the frustration levels are higher than ever before! During the Vietnam era things were terrible, but now…. when will the next Kristallnacht occur?

Philip A Farruggio is a son and grandson of Brooklyn, NYC longshoremen. He has been a free lance columnist since 2001, with over 400 of his work posted on sites like Global Research, Greanville Post, Off Guardian, Consortium News, Information Clearing House, Nation of Change, World News Trust, Op Ed News, Dissident Voice, Activist Post, Sleuth Journal, Truthout and many others. His blog can be read in full on World News Trust, whereupon he writes a great deal on the need to cut military spending drastically and send the savings back to save our cities. Philip has a internet interview show, ‘It’s the Empire… Stupid’ with producer Chuck Gregory, and can be reached at paf1222@bellsouth.net.