Killed seven Gazans, including two children, injuring over 500 others, around 90 from live fire. 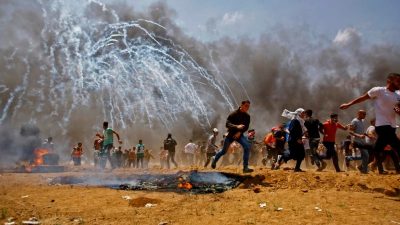 Israel gets away with murdering Palestinians and other horrific human rights abuses because the international community fails to hold it accountable.

According to Gaza’s health ministry, Israeli forces Friday 28, 2018 killed seven Gazans, including two children, injuring over 500 others, around 90 from live fire.

Ministry spokesman Dr. Ashraf al-Qedra said “the types of injuries, and the deliberate use of sniper fire against the protesters, reflect one of the bloodiest and most brutal military assaults against the processions in the Gaza Strip, since the massacre of May 14” when Israeli forces massacred 60 Palestinians, including six children, injuring over 2,700 others.

Since March 30, Israeli forces killed nearly 200 Gazans, around 20,000 others wounded, nearly half from live fire, including by exploding dumdum bullets, able to inflict fist-sized wounds and destroy internal organs.

According to Palestinian Center for Human Rights (PCHR) field workers,

“The Israeli forces continued to use upon highest military and political echelons excessive force against the peaceful demonstrators who posed no threat or danger to the life of Israeli soldiers in the areas of demonstrations.”

Thousands of Gazans turned out yesterday, including women, children and the infirm, peacefully protesting against suffocating blockade responsible for protracted humanitarian crisis conditions.

Lethal and other brute force against defenseless civilians flagrantly violates the Rome Statute of the International Criminal Court, Fourth Geneva, and other international law.

Israeli officials have never been held accountable for decades of high crimes, including premeditated wars of aggression. They enjoy world community immunity to keep committing what no just societies tolerate.

They’re held at an unknown location incommunicado, denied access to their parents and legal counsel.

Israeli forces abduct, traumatize, and brutalize Palestinian children as young as age-six, holding them in seclusion, harshly interrogating them for days, forcing them to sign confessions in Hebrew they don’t understand for offenses they didn’t commit or are too minor to matter.

According to Defense for Children International Palestine (DCIP), up to 700 Palestinian children are kidnapped, detained, and prosecuted in rubber-stamp military tribunals annually.

Most are charged with stone-throwing. Imprisonment up to 10 or 20 years can follow, depending on the child’s age.

The vast majority of victims experience physical violence during arrest, detention and interrogation.

According to DCIP, child fatalities in Occupied Palestine are at a record-high this year – other than when Israeli wars of aggression were waged.

“Israeli forces have operated with near complete impunity for so long that unlawful killings and other flagrant violations of international law have become the norm,” DCIP’s Accountablity Program director Ayed Abu explained, adding:

“Impunity combined with the rise in Israel’s use of live ammunition as a method of quelling demonstrators since 2014 means there is no legal mechanism that will halt this bloodshed.”

Last May, Israel’s Supreme Court OK’d use of live fire against peaceful Palestinian protesters. It rejected petitions by the Adalah Legal Center for Arab Minority Rights in Israel, the Al Mezan Center for Human Rights, the Association for Civil Rights in Israel, Yesh Din, Gisha, and HaMoked.

A joint Adalah/Al Mezan statement said the following in response to the ruling:

“The Israeli Supreme Court completely ignored the broad factual basis presented to it by the petitioners, which includes multiple testimonies of wounded and reports of international organizations involved in documenting the killing and wounding of unarmed protesters in Gaza,” adding:

Justices “refused to watch video clips, documenting Israeli shootings of demonstrators and, rather than actually examining the case, fully accepted the claims presented to it by the state.”

“The extreme nature of the ruling is also highlighted by the striking absence of any mention of the casualty figures that had been presented to the court.”

World community indifference to fundamental Palestinian rights lets Israel get away with murder and other flagrant human rights abuses time and again.