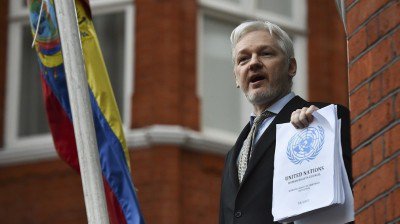 The pulse of negotiations, a flurry of communications, and the person central to this is one who threatens to go nowhere – for the moment.  But go somewhere these parties would wish Julian Assange to do.  For six years, cramped within a space in London a stone’s throw away from Harrods, one he has made his tenuous home, a citadel of sporadic publishing and exposes; for six years, an unruly, disobedient tenant whose celebrity shine has lost its gloss for certain followers and those who did, at one point, tolerate him.

The landlords have lost patience, and Lenín Moreno is willing to call in the arrears.  He has made it clear that, whilst Assange has been subjected to an unacceptable state of affairs (“Being five or six years in an embassy already violates his human rights”), he should also be moved on in some form with the British authorities.  How that moving takes place is producing a host of large, ballooning questions.

Ultimately, the current Ecuadorean leadership finds little to merit Assange’s effort.  He intrudes into the political affairs of other countries with audacity; he disturbs and interrupts the order of things with relish and, for those reasons, ought to be regarded with suspicion.

“I don’t agree with what he does,” Moreno is on record as saying.  “It is somewhat disgusting to see someone violating people’s right to communicate privately.”

Moreno, despite being classed as a protégé of his predecessor Rafael Correa, has done his level best to spruce up the country’s image for the United States whose Vice President, Mike Pence, duly acknowledged on a visit in June this year. He has moved on former figures within the previous administration, including Correa, claiming instances of corruption and crime.  Previous contracts made with Chinese companies are also being scrutinised for their value.

Moreno is prudish and inaccurate on the issue of private communications and the WikiLeaks experiment. What he ignores is the driving rationale for the spicy vigilantism of the publishing outfit, an attempt to subvert a certain order of power that was crying out for a revision. This revision, applied through the lens of transparency, would arm the weak and powerless with knowledge while defending their privacy.  The powerful and brutish, on the other hand, must be kept exposed, under a form of public surveillance and permanent review.  Transparency for the powerful; privacy for the powerless.

The asymmetrical order of information, however, lauds the reverse of this. States are patriarchs beyond scrutiny; they dispense, with occasional bad grace, the odd favour that entitles the public to see its activities.  Freedom of information statutes and regulations give the impression that the public are, somehow, entitled to see material that is supposedly their resource. (How condescending to tell citizens that they have a resource that can only be accessed carefully, via suspicious gatekeepers obsessed with national security.)

In return, these gorged bureaucracies conduct surveillance upon their citizens with a sneering conviction, and ensure that a fictional public interest is deployed against those who would dare air the cupboard of skeletons.

The current state of negotiations are blurry.  On Wednesday, Moreno claimed that Ecuadorean and British officials were nattering over permitting Assange to leave the embassy “in the medium term”.  His lawyers have been notified of the process, but nothing else is forthcoming.

What tends to be written about Assange is itself a product of the dissimulation that he has attempted to banish from political conservation.  His variant of the Midas touch is less turning things to gold than simulacrums of truth.  A piece on the Australian SBS site notes how, “Previous sexual assault charges filed against him in Sweden have been dropped.”  The stopper here is that he was never charged, being merely a subject of interest who needed to be questioned.  The rest is an awkward, concocted silence.

Assange, more significantly for the geopolitical boffins, took a dump in the imperium’s gold water closet, and now faces the consequences.  It has come in drips and drabs: cutting off internet access on March 27; restricting visitors and the access of journalists.  Moreno himself has suggested that Assange stop what he does best: express unsavoury opinions.  Should Assange promise “to stop emitting opinions on the politics of friendly nations like Spain or the United States then we have no problem with him going online.”  Turning Assange into a eunuch of public affairs is a top priority.

Moreno’s predecessors have shaken their heads in disbelief at the treatment being dished out to the Australian publisher.  To ban visitors, argued Correa, was “a clear violation of his rights.  Once we give asylum to someone, we are responsible for his safety, for ensuring humane living conditions.” (It should be noted that Correa himself authorised a temporary suspension of internet access to Assange in 2016, a brief measure taken to stem the publisher’s zeal in attacking Hillary Clinton during the US presidential elections.)

This will be a slow torture, a cruel process of breaking down resistance.  The issue in such cases is to avoid going potty and losing all sense of bearing.  Should Assange even maintain a sense of psychic composure after this relentless attempt to dissolve his will, history should record it as one of those infrequent secular miracles that the human spirit can provide.

Dr. Binoy Kampmark was a Commonwealth Scholar at Selwyn College, Cambridge.  He lectures at RMIT University, Melbourne. He is a frequent contributor to Global Research. Email: bkampmark@gmail.com