Conservative Fox News gave the House to the Democrats 90 minutes before the closing of the polls in California. Thus telling the Republican voters that the game was over, their vote is futile. This was unprecedented. Not even CNN dared to do that.

Under whose influence Is Fox? What motivated this decision?

Furthermore, Nancy Pelosi, in her first speech as the winner of the House, gives a speech that seems like a copy-caricature of the Trump program and slogans, including “War against the Washington Swamp,” and stressing the need for bipartisanship. 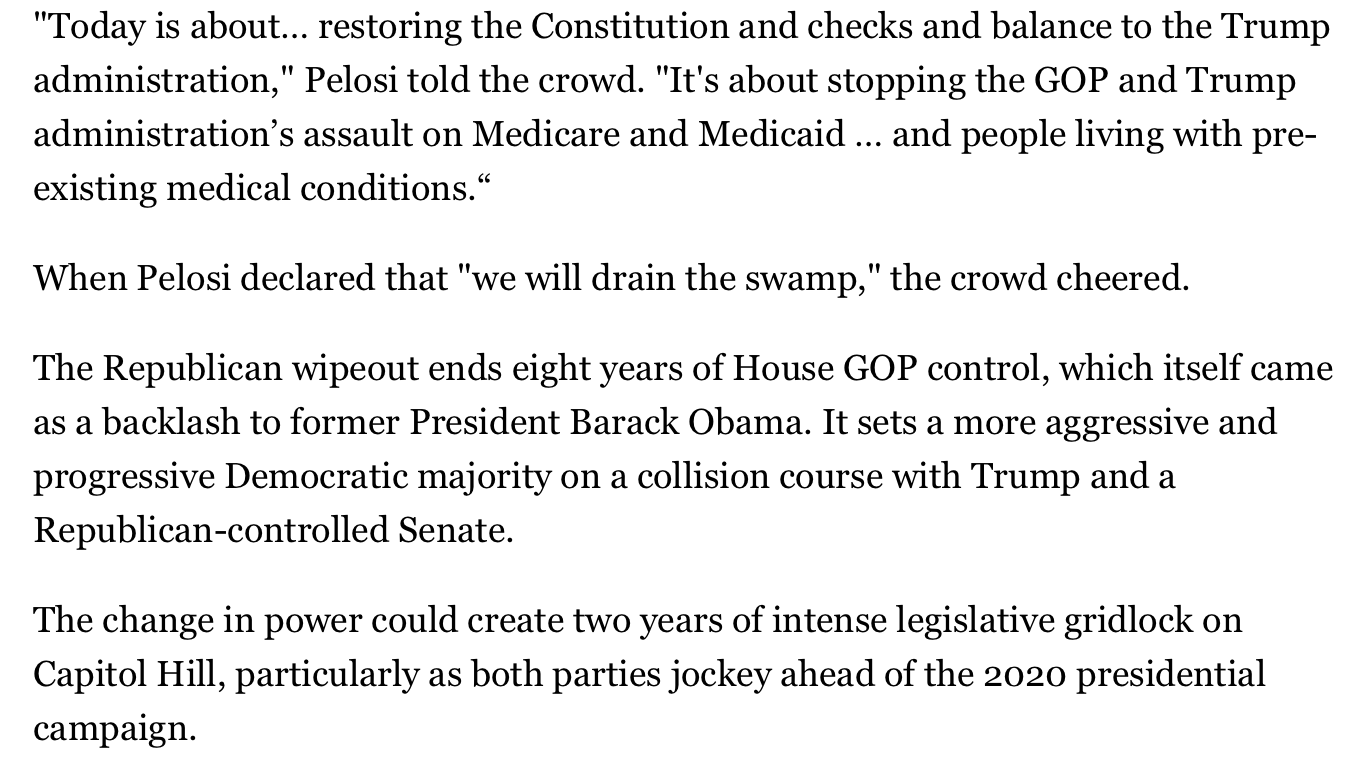 Congratulating Pelosi, Trump echoed back making the least expected statement: He said he is ready (now that he really controls the elected Republican congressmen) to give additional Republican votes to Pelosi in order to make sure she is elected leader of the House, even if a part of the Democrats oppose her.

The key programmatic points stated by the winning (and shaking) Pelosi were:

This would guarantee not only a solid base to restart the REAL economy (as opposed to the nexus of speculative and financial gains) but also a lot of well paying jobs, jobs, jobs.

Now, let’s reflect for a moment regarding the 2016 November elections and the short period before the unchaining of the so-called Deep State agenda Trump.

Before the firing of General Flynn, before Russiagate’s Robert Mueller  & Co. Wasn’t that what the Trump people were trying to do, namely a bipartisan coalition to carry out a program of reconstruction without any desire for wars and free market pirates?

This included good relations with Russia and also a modus vivendi with Syria and President Assad.

One Democrat (Tulsi Gabbard), it was reported in November 2016, was to become the UN ambassador instead of the bloody NeoCon Bushite, Nikki Haley.

In the wake of the 2016 November presidential elections, Rep Tulsi Gabbard met Donald Trump in New York at the Trump Towers:

According to the official, the 35-year-old Hawaii congresswoman is being looked as a candidate for secretary of state, secretary of defense or United Nations ambassador. If selected, Gabbard will be the first woman as well as the youngest pick for Trump’s Cabinet.

The Trump transition source said that their sit-down was a “terrific meeting” and that the Trump team sees her as very impressive. (ABC News, Nov 21, 2016)

Of course, the Deep State corporate money flowed, like gasoline, to inflame violent groups and a series of political gang/countergangs tricks that scared and froze into obedience the “normal” Democrats that could have taken a different road.

This was the purpose, even before the targeting of the Republicans. The “Republicans,” in Congress, despite having been elected by the Trump wave, were still in large part loyal to the Bush machine.

Forgetting for a moment the fog of war and the induced adrenaline: Is it possible now [with regard to US foreign Policy] to imagine a bipartisan Trump agenda? Like the one that was supposed to start in the Spring of 2017 and which was blatantly interrupted by the Deep State cabal?