Forty Years After Jonestown, the People Still Refuse to Wake Up

The details of what that mass-murder represented have been lied about for forty years, and to this day the massacre continues to be described as a “mass suicide.”

For example, here is a piece which aired on NPR’s “Fresh Air” this year, purporting to examine the Jonestown massacre. It begins by declaring:

This Sunday marks the fortieth anniversary of the Jonestown massacre, where cult leader Jim Jones convinced over 900 followers to commit mass suicide by drinking cyanide-laced punch.

However, as the above video makes abundantly clear, the story that continues to be pushed by controlled media outlets is demonstrably false, and the abundant evidence that it is false has been amply documented for decades.

To continue to push the blatant lie that the 918 men, women, boys and girls killed at Jonestown “committed mass suicide” constitutes an insult and an injustice to those who lost their lives in that massacre, as well as to the memory of Congressman Leo Ryan and members of his delegation (including two members of the press) who were killed when Congressman Ryan, who represented a congressional district from which many members of the “Peoples Temple” cult had been recruited (and who was also a former mayor of San Francisco, where the Peoples Temple had been headquartered before it moved to Guyana) visited Jonestown to investigate the allegations of abuse and enslavement that had come to his attention.

In addition, to continue to refer to Jim Jones as an “itinerant preacher” (as the above-linked NPR piece does in its second sentence, immediately following the first sentence which is quoted above) is to ignore the undeniable connections between Jones and very powerful patrons, many of them mentioned in the video documentary. Such a description is absurd.

In order to disabuse yourself of the lies and ongoing cover-up regarding the events of that fateful day, I would recommend carefully watching the above video in its entirety, perhaps several times. It is a segment of a 2006 documentary entitled Evidence of Revision: The Assassination of America.

Meet Mae Brussell – Foretelling the ‘War on Terror’ in 1974

You can also listen to a somewhat condensed, audio-only version of the same material by visiting the archive of Bonnie Faulkner’s long-running show, Guns and Butter. You can scroll down to episode #188, which aired on November 18, 2009, and which you can listen to online (or download to a mobile device) by following this link.

If you pay close attention, you will understand why the truth regarding the Jonestown massacre continues to be deliberately obfuscated to this day.

And, if you think about it, you will also perceive that the Jonestown massacre was not perpetrated by “the government.”

Congressman Leo Ryan of the House of Representatives was a representative of “the government” — which is to say, a representative of the lawful power of the people (in a democratic republic). The fact that he was murdered demonstrates a desire by those responsible for the things that were going on at Jonestown to prevent the details of what they were doing from becoming known to the government. The massacre followed his murder and the murder of some of those with him.

This point is extremely important to contemplate carefully. I am convinced that the best hope for the prevention of injustice, oppression, and everything associated with organized crime lies in the power of the people expressed through democratic government and its lawful organs of power.

The murder of Leo Ryan demonstrates that, despite their great power and obvious control over many who are in the government, the forces behind what was taking place at Jonestown in Guyana understand the potential threat posed by the representatives and institutions of a democratic government.

The continued repetition of egregiously, demonstrably false explanations of the Jonestown massacre as “mass suicide” demonstrates very much the same thing regarding the potential threat posed by the people themselves, should they ever wake up to what is going on.

Indeed, it is the power of the people themselves (should they ever become aware in large numbers of what is going on) which poses the greatest threat, because (as we have seen in the forty years since the perpetration of the massacre of more than 900 American men, women, boys and girls in Guyana), the representatives will not on their own do much of anything to confront the problem if the people themselves do not wake up and demand it.

Image on the right: Congressman Leo Ryan speaking with sign behind him, “Those who do not remember the past are condemned to repeat it.” (Source: author) 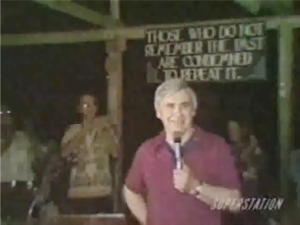 On a personal note, Congresswoman Jackie Speier of the House of Representatives, who is seen in the video linked above and who was part of the delegation led by Congressman Leo Ryan to visit Jonestown forty years ago, is the currently-serving representative for the congressional district containing my hometown and the place where I was born.

She was a legal aide to Congressman Ryan at the time. She was elected to this office in a special election following the death of the late Congressman Tom Lantos in 2008. Tom Lantos is the Congressman who appointed me to West Point back in 1987.

Right a screenshot from the video documentary, showing Congressman Leo Ryan in Jonestown, on the night of November 17, 1978, the day before he was murdered. You can see this image at about the 0:49:49 mark in the video.

As the camera pans out, we see in the background a hand-painted sign, affixed to the wall of the building within the Peoples Temple compound where Congressman Ryan was speaking that day. It speaks to the danger we all face if we continue to refuse to wake up.