The worm has gotten into Apple, and is feasting with some consistency.  Revenue has fallen. Chief executive Tim Cook is cranky.  The celebrated front of Apple’s wealth – the iPhone with its range of glittering models – has not done as well as he would have hoped.  Dreams of conquering Cathay (or, in modern terms, the Chinese market) have not quite materialised.

In a letter to Apple’s investors, Cook explained that “our revenue will be lower than our original guidance for the quarter, with other items remaining broadly in line with our guidance.”  This somewhat optimistic assessment came with the heavily stressed caveat:

The reasons outlined were various, but Cook, in language designed to obfuscate with concealing woods for self-evident trees, suggested that the launches of various iPhone types would “affect our year-to-year compares.” That said, it “played out broadly in line with our expectations.”  While Cook gives the impression of omniscience, he is far from convincing.  Why go for the “unprecedented number of new products to ramp”, resulting in “supply constraints” which led to limiting “our sales of certain products during Q1 [the first quarter]”?  Such is the nature of the credo. 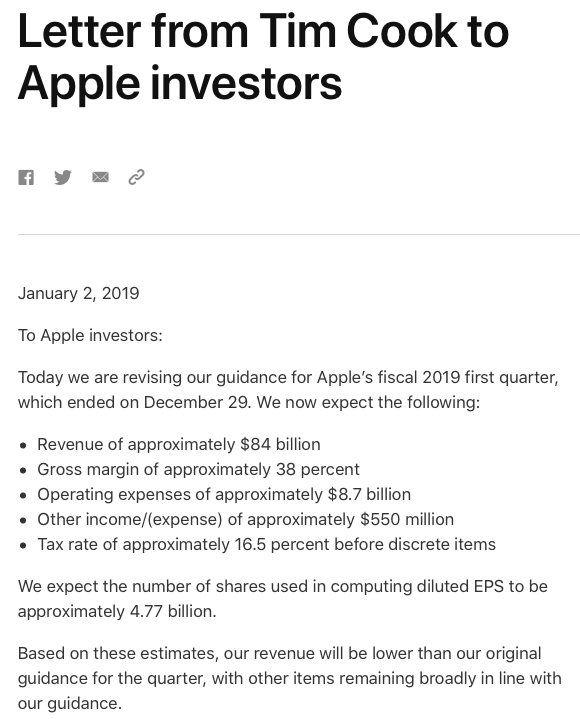 Where matters were not so smooth to predict were those “macroeconomic” matters that do tend to drive CEOs potty with concern.  While there was an expectation that the company would struggle for sales in “emerging markets”, the impact was “significantly greater… than we had projected.”  China, in fact, remained the hair-tearing problem, singled out as the single biggest factor in revenue fall.

“In fact,” goes Cook’s letter of breezy blame, “most of our revenue shortfall to our guidance, and over 100 percent of our year-over-year worldwide revenue decline, occurred in Greater China across iPhone, Mac and iPhone.”

The slowing of China’s economy in the second half of 2018, with a slump in the September quarter being the second lowest in the last 25 years, deemed a significant factor.

The irritating tangle of world politics also features; as ever, Apple can hardly be responsible for errors or misjudgements, and prefers, when convenient, to point the finger to the appropriate catalyst.  The United States has not made matters easy for the Apple bottom line in its trade war spat with Beijing.

“We believe that the economic environment in China has been further impacted by rising trade tensions with the United States.”

While it is never wise to consult the view of economists without caution (their oracular skills leave much to be desired), the feeling among the analysts is that a further contraction is nigh.

“We expect a much worse slowdown in the first half, followed by a more serious and aggressive government easing/stimulus centred on regulating the property market in big cities,” claims chief China economist at Nomura, Ting Lu.  But chin up – a rebound is bound to happen in the latter part of 2019.

The Apple vision is, however, dogmatically optimistic, an indispensable quality to any cult.  China remains customary dream and object, a frontier to conquer.  It is stacked with Apple friendly innovators (“The iOS developer community in China is among the most innovative, creative, and vibrant in the world.”) and loyal customers who have “a very high level of engagement and satisfaction.”

Product fetishism only carries you so far.  The iPhone models are not exactly blazing a trail of enthusiasm in other countries either.  Users in Brazil, India, Russia and Turkey can count themselves as being more reluctant.

Some of this dampening is due, in no small part, to a certain cheek on the part of the tech giant, one nurtured by years of enthusiastic, entitled arrogance.  In late 2017, for instance, the company revealedthat it was slowing down iPhones with old batteries in an attempt to prevent undesired shutdowns.  But the company did not feel any great desire to inform users of this fiddling, and it took the published findings of an iPhone user to replace his iPhone 6’s battery, thereby restoring performance to accepted levels, to kick the hornets’ nest.

“The fix was implemented via an update last January [2017], but Apple didn’t accurately inform users of what was going to happen to chemically aged batteries.”

Class action suits followed in the United States; Brazilian authorities insisted that the company inform iPhone users on how to have their batteries replaced within 10 days.

The bite on Apple has had its predictable shudder on the markets.  Investors ran off some $75 billion on the company’s stocks.  The Nasdaq fell by 3 percent; the Dow Jones Industrial Average fell 2.8 percent.  An environment of chaos has greeted us in 2019, and fittingly, Apple remains at the centre of it, a company as responsible for modern technological worship as any.  As with any central dogma, disappointments are bound to happen, an irrepressible function of misplaced belief.

Dr. Binoy Kampmark was a Commonwealth Scholar at Selwyn College, Cambridge.  He lectures at RMIT University, Melbourne.  He is a frequent contributor to Global Research and Asia-Pacific Research. Email: bkampmark@gmail.com