Three sturdy trekkers step out of a van and hoist top-heavy blue, green and orange rucksacks onto their backs. The two young women and a man then set off on foot, headed to one of Kathmandu’s numerous backpackers’ hotels. I ask where they’ve arrived from; “Langtang”, replies one of the women and hurries on. (Langtang is a rugged, remote valley north of the capital popular with hikers). The trio is likely booked at a Chinese lodge in Nepal’s newly designated “Chinatown”. That’s a crowded strip of shops, hotels and cafes in Thamel, the low-end tourist quarter of the Nepalese capital.

Those three young trippers, all Chinese, are part of an international community enjoying the rigors and glamour of Himalayan hiking. Fitted in climbing boots and North Face jackets, they’re hardly distinguishable from thousands of foreigners striding through Nepal’s middle hills to glimpse the spectacular peaks beyond. Although, it’s doubtful if they reflect on the other side of this seemingly impenetrable stretch of the world’s highest mountains. There, after all, lays the Tibetan province of China, their homeland!

These tourists, along with (Chinese) Tibetans, most of them pilgrims, fly into Kathmandu’s Tribhuvan airport with other foreign visitors. Their flights originate in Chinese cities however, among them Chengdu, Kunming, and Zhengzhou. With numbers increasing annually, China is reportedly now Nepal’s second largest source of tourists. (China is Nepal’s second largest trade partner, too.) Yet these sightseers represent a minor, although personal, aspect of an established Chinese presence in Nepal.

Chinese are also visible in Kathmandu’s business quarter. Here, enterprising agents search out products for export to China. It’s not uncommon to see visitors from Shanghai or Shenzhen negotiating with pashmina shawl wholesalers and jewelry outlets, with dealers in handcrafted wood, silver and brassware, and with distributors of exotic teas and cosmetics.

Hotels catering to Chinese trekkers seem to be wholly Chinese- operated. Some ask how that’s possible given Nepal’s law against foreign ownership; although silent local partnerships are a common arrangement for foreign businesses here.

Nepali shopkeepers find it increasingly hard to complete when Chinese operators pay above market rates. However, one hears few criticisms of the Chinese presence, certainly nothing comparable to hostility directed at Indian business interests.

India and Nepal have a long and checkered relationship– mainly positive. Nepal’s recently ousted line of monarchs originated in India. And Hinduism, Nepal’s dominant religion, is either indistinguishable from Indian Hinduism or is a fusion of Indian and ancient Nepali traditions.

Being landlocked and without a manufacturing base Nepal became increasingly dependent on India– specifically on Indian imports. Its southern neighbor with whom it shares an almost porous border (of 1,088 miles) is Nepal’s main source of electricity, fossil fuels and virtually all manufactured goods as well as fresh produce. This is facilitated by decades of Indian aid for the construction of roads and transmission lines linking the two countries. India has long been the gateway into and out of Nepal.

Politically, India is a kind of mentor. Nepali opposition figures depended on India’s protection during periods of exile; once in power, newly elected leaders customarily make an inaugural visit to India for sanction and support. Nepal accepts its huge trade deficit with India and its cultural and political dominance as inevitable. But how long can this last?

The danger of their imbalance was manifest three years ago when India subjected Nepal to a mean-spirited economic boycott. That happened on the heels of the traumatic 2015 earthquake. In support of the Madeshi people (a Nepali population who inhabit the southern border regions) with their strong cultural and economic affinity, India effectively sanctioned a punishing trade ban on the Nepalese. Anti-Indian feeling generated during that six-month period is still palpable, perhaps one reason Nepal would welcome a cross Himalayan rail route from China. 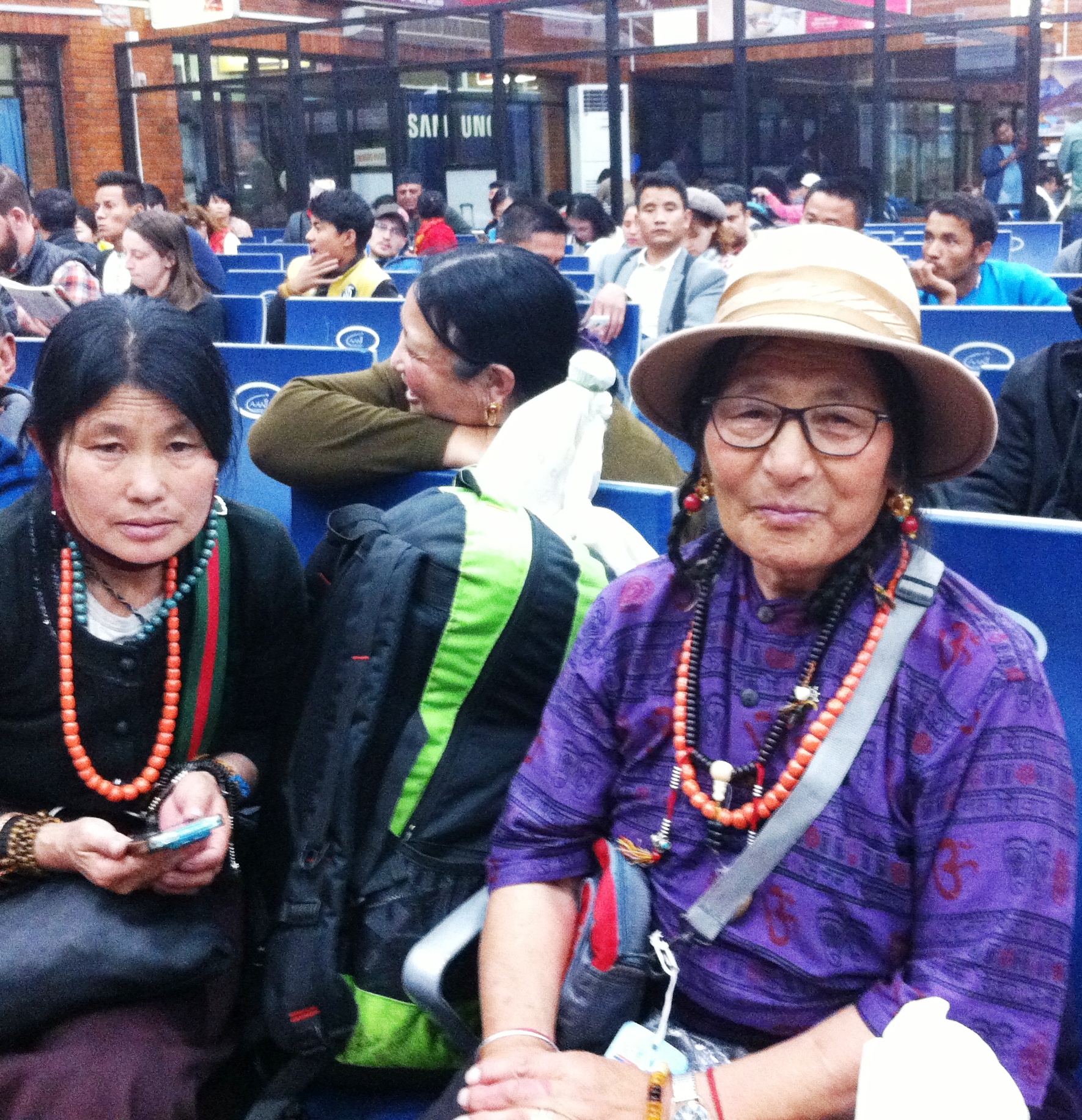 Chinese economic interests in Nepal are not new and not confined to tourism. In recent years Chinese goods– phones, an array of electrical and other household items, and clothing and fresh fruits, most entering by air—have become ubiquitous. Chinese products at prices competitive with Indian goods are everywhere, in village and city. But for China to become a real alternative to India, a land corridor is essential.

For years we’ve heard rumors of a China-Nepal railway route. Today it’s a possibility— forged through Himalayan rock and glacier –and is discussed in practical terms. Consisting primarily of bridges and tunnels blasted through the Himalayas from Tibet, it would meet roads approaching the northern frontier from the south. Given China’s engineering successes domestically and advances in its global Belt and Road Initiative, this project is a real option (where Nepal would invest nothing). Thus far China seems tolerant of Nepal’s engineering incapacities and rampant corruption that undermined past construction projects. A December 2018 review of China’s economic interest in Nepal suggests rising investments in construction, transportation and tourism. Since 2013, it notes, “there have been 229 contracts signed between Chinese companies and Nepal, valued at $3.32 billion with $1.88 billion already closed.”

Nepal sees China increasingly as an alternative to Indian domination. Chinese earthquake support was substantial yet low-key; residents still recall the quiet deliberation with which Chinese medical teams worked. This is addition to quake-damaged road repairs and temple reconstruction by China.

As a major center of living Buddhism, a home to tens of thousands of Tibetan refugees created by China’s harsh anti-religious policies, Nepali’s view of China was very negative in the past. That has clearly changed. The number of Tibetan pilgrims from China is rising, while other Chinese visitors show genuine interest in Nepal’s Buddhist institutions. Increasing numbers of Chinese are evident touring the sacred Buddhist shrines of Bauddhanath and Swayambunath in Kathmandu Valley. And it’s reported that Chinese students attend lectures in Buddhism delivered by Tibetan abbots at monasteries there. We should not be surprised if Han Chinese will be found among acolytes taking vows and donning the red robes of Tibetan monk-hood.

This article was originally published on CounterPunch.

Barbara Nimri Aziz is a New York based anthropologist and journalist. She is the author of “Tibetan Frontier Families” and numerous articles on Tibet and Nepal, has been working in Nepal in recent weeks. Find her work at www.RadioTahrir.org. She was a longtime producer at Pacifica-WBAI Radio in NY.