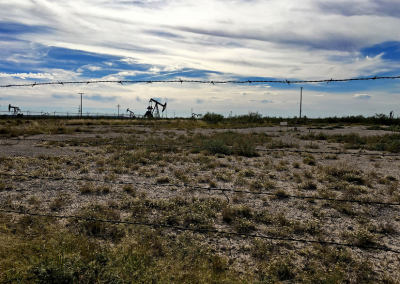 In 2015, Pioneer Natural Resources filed a report with the federal Securities and Exchange Commission, in which the shale drilling and fracking company said that it was “drilling the most productive wells in the Eagle Ford Shale” in Texas.

That made the company a major player in what local trade papers were calling “arguably the largest single economic event in Texas history,” as drillers pumped more than a billion barrels of fossil fuels from the Eagle Ford.

Its Eagle Ford wells, Pioneer’s filing said, were massive finds, with each well able to deliver an average of roughly 1.3 million barrels of oil and other fossil fuels over their lifetimes.

Three years later, The Wall Street Journal checked the numbers, investigating how those massive wells are turning out for Pioneer.

Turns out, not so well. And Pioneer is not alone.

Those 1.3 million-barrel wells, the Journal reported, “now appear to be on a pace to produce about 482,000 barrels” apiece — a little over a third of what Pioneer told investors they could deliver.

In Texas’ famed Permian Basin, now the nation’s most productive shale oil field, where Pioneer predicted 960,000 barrels from each of its shale wells in 2015, the Journal concluded that those “wells are now on track to produce about 720,000 barrels” each.

Not only are the wells already drying up at a much faster rate than the company predicted, according to the Journal’s investigative report, but Pioneer’s projections require oil to flow for at least 50 years after the well was drilled and fracked — a projection experts told the Journal would be “extremely optimistic.”

Fracking every one of those wells required a vast amount of chemicals, sand, and water. In Karnes County, Texas, one of the two Eagle Ford counties where Pioneer concentrated its drilling in 2015, the average round of fracking that year drank up roughly 143,000 barrels of water per well.

And while Pioneer has become one of the most active drillers in the Permian, it’s hardly alone in booking projections that the Journal found were dubious.

“Two-thirds of projections made by the fracking companies between 2014 and 2017 in America’s four hottest drilling regions appear to have been overly optimistic, according to the analysis of some 16,000 wells operated by 29 of the biggest producers in oil basins in Texas and North Dakota,” it reported. “Collectively, the companies that made projections are on track to pump nearly 10 percent less oil and gas than they forecast for those areas, according to the analysis of data from Rystad Energy AS, an energy consulting firm.”

“That is the equivalent of almost one billion barrels of oil and gas over 30 years,” the Journal added, “worth more than $30 billion at current prices.”

The problems the Journal focused on will be familiar to those who’ve turned a critical eye to shale reserves in the past: The most productive areas, or “sweet spots,” are smaller than first expected and companies predicted that wells would dry up slower than they have. DeSmog launched its latest seriescovering shale’s financial woes in April 2018 and our coverage extends back over a half-decade.

For the Journal, the take-aways were financial. “So far, investors have largely lost money,” the newspaper pointed out, adding that a review of 29 drillers showed companies have spent $112 billion more than they earned from drilling in the past decade. “Since 2008, an index of U.S. oil and gas companies has fallen 43 percent, while the S&P 500 index has more than doubled in that time, including dividends.”

Fracking and the Shale Gas “Revolution”

The industry’s defenders argue that spending money now to make money later is simply how business works — this year’s “losses” are actually investments in future profits.

But because shale drilling is relatively new, even the experts are left guessing about how much oil will be flowing from the wells 10, 20, or 30 years after fracking — and investors have become frustrated as shale drillers have largely failed to turn the corner and start racking up profits instead of continuing to operate in the red.

A natural gas flare in West Texas, near Midland. In 2018 the price of natural gas in the Permian fell below zero. Credit: © Laura Evangelisto

“The industry’s only hope of paying off debt and rewarding equity investors is for oil prices to rise high enough for long enough that they can generate consistent cash flow without breaking the bank on capex [capital expenditures],” said Clark Williams-Derry, director of energy finance at the Sightline Institute.

“But they’ll have real problems — sweet spots are getting depleted, wells are declining faster than they’d hoped, pipelines are still constrained causing deep discounts in some markets, co-produced gas is close to worthless, and any sustained rebound will boost the cost for drilling services (i.e., higher prices mean higher costs).”

“Plus,” he added, “investors need to worry about long-term cleanup costs.”

Calling in the Experts

And the pressure on the experts charged with preparing oil and gas production estimates for drillers is enormous. As the first shale wells get older and more production history rolls in, engineers have developed models they say can make better predictions — but the Journal suggested those tools haven’t been widely adopted.

“Why aren’t we doing this?” one engineer demanded repeatedly after John Lee, one of the most prominent reserves experts in the U.S., gave a talk in Houston in July about making more accurate shale projections.

“‘Because we own stock,’ replied another engineer, sparking laughter,” the Journal reported.

The Journal’s reporting frequently cited Rystad Energy, an independent oil and gas consulting firm, as the source of more conservative projections — but, as DeSmog has previously reported, Rystad isn’t the only large independent firm to find troubling indications that shale wells are on track to produce only a fraction of their “proved” reserves.

Wood Mackenzie, another major oil consulting firm, studied the Permian’s Wolfcamp shale, where early projections predicted that production from a five-year-old well should be declining at a rate of 5 to 10 percent. Those wells, the firm found, are actually declining by roughly 15 percent a year — a significantly larger drop than expected and an ominous sign for any companies projecting wells can last 50 years.

Things are looking a little drier than expected for the future of fracked wells in Texas. Credit: Francesco Ungaro from Pexels

And fracking giant Schlumberger — which like Halliburton specializes in performing hydraulic fracturing jobs on wells other companies drill — has begun calling attention to a problem with much more immediate impacts: The sweet spots are getting too crowded.

For years, the industry has said that it can minimize impacts by drilling multiple wells from the same well pad — but in parts of the Permian, wells drilled later on or near existing well pads have provedroughly 30 percent less productive compared to the first well drilled.

“[T]he well-established market consensus that the Permian can continue to provide 1.5 million barrels per day of annual production growth for the foreseeable future is starting to be called into question,” Schlumberger’s CEO Paal Kibsgaard said in an October 2018 earnings call. “At present, our industry has yet to understand how reservoir conditions and well productivity change as we continue to pump billions of gallons of water and billions of pounds of sand into the ground each year.”

Kibsgaard warned that similar problems are beginning to show up in the Eagle Ford as well.

The Long-Term Costs of a Boom and a Bust

Karnes County is still the most active part of the Eagle Ford, with 562 drilling permits issued last year. After a heady oilfield boom, oil prices plunged in 2015 and 2016, leading to the layoffs of thousands of workers and royalty checks drying up. This past year, drilling has re-emerged, albeit at a slower pace.

“It’s not a boom, but there’s a resurgence here in the Eagle Ford,” Rick Saldana, an energy company superintendent told the Houston Chronicle in October.

Investors have faced a rocky ride. Sanchez Energy, the Eagle Ford’s third largest driller, has now been warned twice by the New York Stock Exchange that it will be de-listed if its stock price, now at roughly $0.26 a share, doesn’t soon rise above $1.

What’s so weird about the energy world is that stories like this and the wsj piece about the myth of the $50 breakeven (https://www.wsj.com/articles/big-fracking-profits-at-50-a-barrel-dont-bet-on-it-1543919401 …) seem to live in a parallel world from all the bullish pieces about ever-soaring US production. Why?

But other impacts of the boom and bust cycle run deeper.

In nearby Dilley, Texas, a former oilfield man-camp, built to house Eagle Ford workers, was turned intothe “the South Texas Family Residential Center” in December 2014 by a private prison company. It’s now the nation’s largest immigration detention center for families, housing up to 2,400 people, half of them children.

And while over the past decade, Wall Street and other investors poured billions into fracking — the Journal tallied $112 billion more spent than earned from production at 29 major drillers — the U.S.more broadly has failed to seriously invest in a rapid transition away from climate-changing fossil fuels.

That leaves the U.S. at risk of being left behind as the rest of the world focuses its efforts to innovate on renewable energy prospects that don’t dry up like oil wells. Bethany McLean, a financial journalist famous for first breaking the Enron story, recently told Fortune about conversations she’d had with major private equity investors as she researched her new book Saudi America.

“They are all trying to figure out when we’ll be able to see the end of the oil age, because as soon as that happens, the price of oil will go into secular decline (as it did with coal),” she said. “Other countries, namely China, are frantically investing in renewables. For us to crow about our oil wealth, and not focus on renewables, is for us to miss the opportunity to be leaders in the world as it’s going to be.”

The original source of this article is DeSmogBlog
Copyright © Sharon Kelly, DeSmogBlog, 2019