The White Helmets, “volunteers” who reportedly “rescue Syrians from rubble.” Never in history has such a group been so feted by the elite, or received so many awards from institutions acting as extensions of US and UK hegemony.

A recent panel at the UN Security Council in New York revealed the shocking evidence of White Helmet involvement in organ trafficking in Syria. The lucrative trade of human body parts, bones, blood and organs is one of the most protected and hidden harvests of war.

The potential of White Helmet involvement in these nefarious activities raises questions that must be answered. Why were the shocking revelations met by a wall of silence from corporate media present at the panel in New York?

Not one media outlet pursued the subject, preferring to divert onto more comfortable issues that did not challenge the iconization of the White Helmets that has been the default position for virtually all state-aligned media since the establishment of the group in 2013 in Jordan and Turkey. 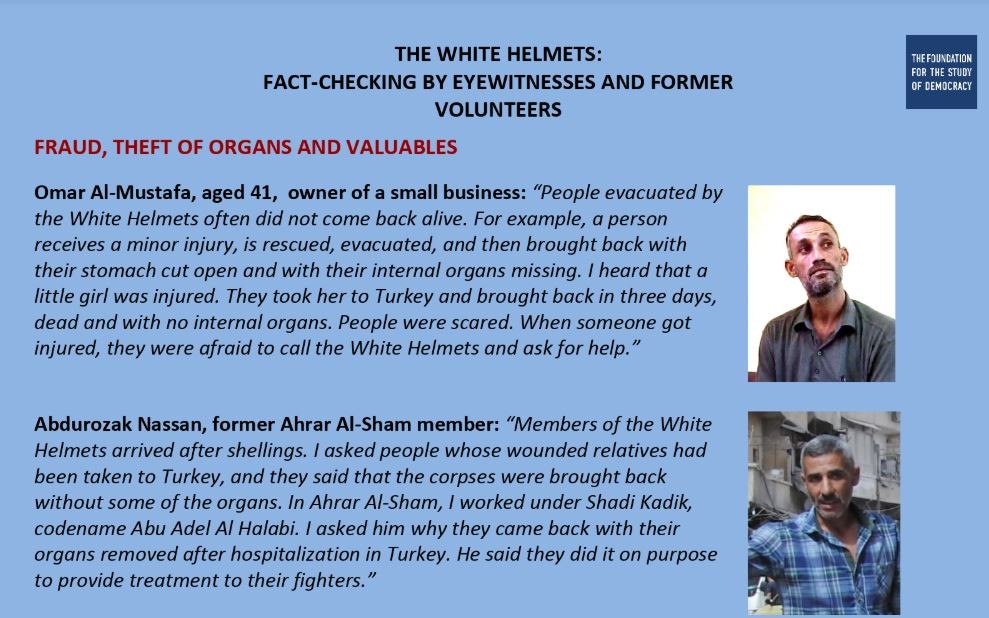 © Screenshot from the presentation of Maxim Grigoriev

Above is one of the slides from the presentation of Maxim Grigoriev, director of the Foundation for the Study of Democracy, given to the panel and audience at the UNSC in New York, December 2018.

In July 2017, I had interviewed residents of the East Aleppo districts that had been under occupation of the various extremist armed groups and the White Helmets. Salaheddin Azazi was a resident of the Jib Al Qubbeh area (also mentioned in Grigoriev’s presentation).

Azazi went through the details of the November 2016 Nusra Front attack on civilians trying to flee via the Syrian and Russian-established humanitarian corridors which had been spun by the White Helmets into a “regime” bombing raid that resulted in a civilian massacre. It was a complete misrepresentation of reality which was seized upon by corporate media with no fact checking. My full report on that incident and the White Helmet involvement in the massacre and subsequent theft of civilian belongings from the dead and dying is here.

“The bodies of the dead and dying were left unattended for ten hours in the street after the Nusra Front rocket attack that killed 15 civilians. The White Helmets did not help them, they stole their belongings,” Salaheddin Azazi, resident of Jib Al Qubbeh and eyewitness to events on 30.11.2016, said. 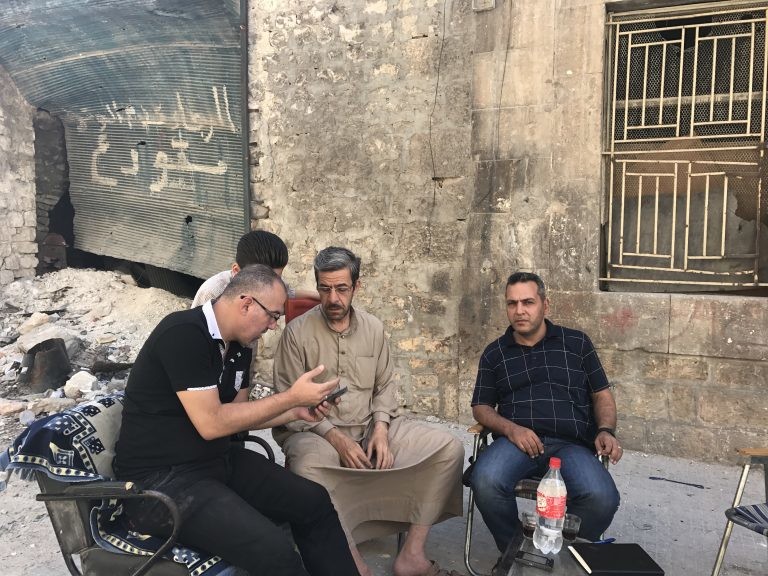 Azazi and another resident, Ammar Al Bakr (on the right, in above photo) described how the White Helmets were the “runners” for the organ traffickers.

“The White Helmet drivers would take the injured or dead bodies to the Turkish border. Many of the injured had light wounds, nothing that needed hospitalization but the bodies would come back without organs,” said Ammar Al Bakr.

“The bodies, dead and alive, would be inspected in the towns on the borders with Turkey before being taken by Turkish vehicles to the hospitals but if the injured civilian was a child or young and strong they would be taken directly to the hospital in Turkey because their organs had greater value,” Azazi told me.

According to both of these witnesses, the bodies were worth $2000 dead and $3000 if alive and this market was dominated by the White Helmet operatives who profited from cross-border organ trafficking.

Other civilians I met in July/August 2017 confirmed the threat of organ theft which hung over them during the almost five-year occupation of East Aleppo districts by the armed groups and their White Helmet auxiliaries. Families spoke to me of hiding their children if they were lightly injured to prevent the risk of them being abducted and taken to one of three hospitals – Omar Abdulaziz, Al Quds and Zarzour – that allegedly specialized in organ theft in East Aleppo, all of which had been taken over by militant gangs early on in the conflict. I was told that “foreign doctors” were operating in these three hospitals and were in charge of organ extraction. In post-liberation Eastern Ghouta, similar storiesabounded.

In January 2019, I visited survivors from the Jaysh Al Islam controlled Tawbah Prison in Douma, Eastern Ghouta (known as Repentance Prison). I met with former prisoners in Adra Al Balad who spoke of the torture and violent abuse they had received after being kidnapped from Adra Al Ummaliya in 2013 by Jaysh Al Islam and Nusra Front. Familiar descriptions of the White Helmets were forthcoming:

“Regarding the White Helmets, they are terrorists and Takfiris […] they have nothing to do with Humanity […] when they used to see an injured civilian, they used to finish them off. If you come to “rescue” a man would you slaughter them? The White Helmets and the terrorists are one and the same, they are hand in hand,” said Hassan Al Mahmoud Al Othman, one of the survivors I spoke to about their experiences as captives of Jaysh Al Islam and Nusra Front during the six years that Eastern Ghouta was occupied.

The evidence against the White Helmets is mounting on a daily basis and will only increase as Idlib is liberated or a political resolution is achieved in the last Syrian province effectively controlled by Hayat Tahrir Al Sham (HTS) a rebrand of Al Qaeda.

Despite this, Western corporate media and NATO-aligned think tanks, policy influencers and NGOs are stubbornly sticking to the “volunteer hero” script. The Observer recently collaborated with Reader’s Digest to produce a slick homage to the White Helmets “rescued” from Syria by Israel in July 2018, entitled ‘The inside story of Canada’s dramatic rescue of the White Helmets out of Syria.’ It depicts the volunteer “bankers and barbers” as heroes and downtrodden saints fleeing for their lives. A far cry from the image portrayed of organ thieves, child abductors and bone peddlers by the Syrian people who lived under the White Helmet regime of sectarian violence and exploitative abuse.

A network of global carpetbaggers enabling the criminal obfuscation of White Helmet crimes against Humanity and denial of justice to the Syrian people whose accusations against the pseudo humanitarian group are systematically silenced and marginalized by the White Helmet acolytes.

The White Helmets have received an unprecedented number of awards and peace prizes, including the Right LivelihoodAward 2016 (RLA), the Atlantic Council Freedom Award 2016, Tipperary PeacePrize 2017, Hollywood Oscar 2017 (one win, one nomination in 2018) and they have been nominated for the Nobel Peace Prize for three years running.

According to the RLA website, they “honour and support courageous people and organisations that have found practical solutions to the root causes of global problems”. There is nothing honourable or courageous about the White Helmet crimes against the Syrian people.

The White Helmets have enabled and participated in organ trafficking, one of the deepest root causes of our global problems but the RLA has made no move to retract their award from this group of criminals, thieves and terrorists. They have ignored petitions and statements from groups of peace activists and academics. Instead, in 2018, they published a counter petition signed by 29 former RLA Laureates calling upon all parties to “stop targeting the White Helmets […] in Syria”.

What all these US Coalition-aligned organizations fail to understand is that Russian media and UN missions do indeed give a voice to the Syrians who are ignored by media in the West. Russia is not the originator of the claims against the White Helmets.

While these organizations, claiming to support peace in Syria and an end to hostility, continue protecting the White Helmets who are responsible for so much of the misery endured by the Syrian people, they forfeit any credibility and become nothing more than a corrupt extension of US supremacism in the region.

Child exploitation, abuse, human trafficking and organ trafficking – which often goes hand in hand with the former – should never be tacitly condoned or covered up and must always be investigated or we have fallen into a moral vacuum from which there is no escape.

I invite all Western media outlets and “peace” promoting institutions to retract their White Helmet accolades and laurels, and to “scrutinize” the evidence before they too are implicated in one of the most heinous crimes ever committed against victims of war.

This article was originally published on RT News.

Vanessa Beeley is an independent investigative journalist and photographer. She is associate editor at 21st Century Wire. She is a frequent contributor to Global Research.