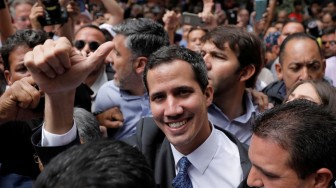 Warnings from Germany, France and Spain to recognize the self-proclaimed president of Venezuela unless new elections are held came at the same time and were even similarly worded, Russia’s FM spokesperson noted.

“The statements are not simply identical but they are even made simultaneously,” Foreign Ministry spokeswoman, Maria Zakharova, wrote on Facebook.

Earlier on Saturday, Paris, Berlin and Madrid announced their readiness to recognize the self-proclaimed “interim president” of Venezuela, Juan Guaido, unless the country holds snap presidential elections within eight days.

The messages appeared to be well-coordinated indeed.

The ultimatum was almost instantly echoed by French President Emmanuel Macron, who took to Twitter issuing a similar threat in French and Spanish – to get the message through, apparently.

11.2K people are talking about this

“The Venezuelan people must be able to freely decide their future. Without elections announced in 8 days, we could recognize [Guaido] as ‘interim president’ of Venezuela to launch this political process,” Macron said, adding that he was working with “European partners.”

Exactly the same message was posted on Twitter by the deputy spokeswoman of the German government. Later in the day, the European chorus was joined by the UK, with its Foreign Ministry voicing the ultimatum again.

ALSO ON RT.COM‘Guido’? Pompeo mangles name of US-backed Venezuelan ‘president’Guaido proclaimed himself “interim president” of Venezuela on Wednesday, swiftly receiving strong support from abroad. The US was the first to recognize the unelected “president,” and over a dozen countries – including almost all the South American states – have followed suit.

Russia, China, Turkey, Cuba and other states, however, vowed support to the elected president of Venezuela, Nicolas Maduro, condemning the externally-fueled coup attempt. Maduro, on his part, did not take Washington’s actions lightly, and severed diplomatic ties with the US.

Over the past few days, the country has seen massive anti-government protests, as well as counter-protests staged by supporters of the legitimate authorities.

Venezuelan military and state officials have also vowed their support to the president. On Friday, Maduro announced massive military drills to be held in early February, which are supposed to warn any potential adversaries from staging open aggression against the country.

On Saturday, Russia, China, South Africa, and Equatorial Guinea blocked the US push for a UN Security Council statement expressing support for the Guaido-led National Assembly as the “only democratically-elected institution,” of Venezuela. The move came ahead of the UNSC meeting, requested by the US, in which the Venezuelan crisis is set be discussed.

Posted by Jaime C. on January 26, 2019 in Uncategorized and tagged Venezuela.