“Also seems like the Trump administration is expecting tomorrow to be showdown day in Venezuela as protests expected nationwide.”

National Security Adviser John Bolton—the neoconservative who’s played a key role in the Trump administration’s effort to overthrow the Venezuelan government—suggested on Friday that President Nicolás Maduro could find himself locked away in the U.S. military prison at the Guantánamo Bay Naval Station in Cuba if he does not soon step aside.

66 people are talking about this

According to the show’s official transcript, Bolton’s remarks came in response to a question about the various fates of other ousted heads of state:

In a tweet on Thursday, Bolton had urged Maduro and his advisers to resign and accept Guaidó’s amnesty offer:

I wish Nicolas Maduro and his top advisors a long, quiet retirement, living on a nice beach somewhere far from Venezuela. They should take advantage of President Guaido’s amnesty and move on. The sooner the better.

22.1K people are talking about this

Bolton’s comments were quickly highlighted on social media by critics, including journalist Jeremy Scahill, whose latest episode of the podcast Intercepted, published Wednesday, focused entirely on how the Trump administration “is openly engaging in a blatant effort to overthrow” Maduro. 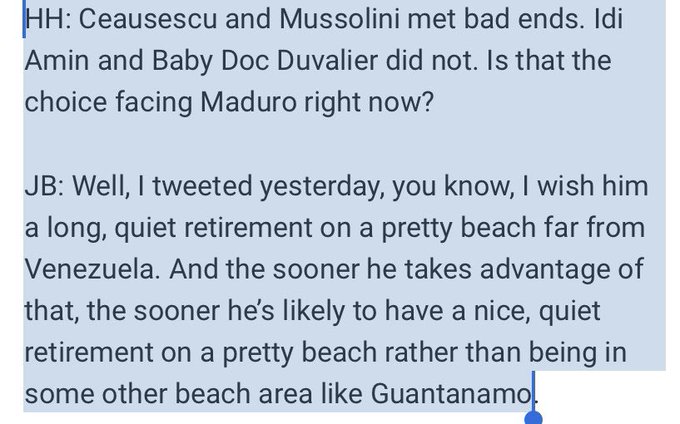 “It is a campaign aimed at regime change and it’s being promoted openly as an opportunity to steal Venezuelan oil for the benefit of U.S. corporations,” Scahill noted on the podcast. “This is not some insane Twitter thought spewed by Trump after guzzling down gallons of Fox and Friends. It’s an open imperialism that is being embraced not just by Republicans and Trump supporters, but powerful Democrats as well.”

Some top Democratic lawmakers including Senate Minority Whip Dick Durbin (Ill.) have praised the Trump administration for treating Guaidó as Venezuela’s leader. Others, however, have spoken out against U.S. meddling while still criticizing Maduro’s role in the economic and political crises gripping his country.

“we must learn the lessons of the past and not be in the business of regime change or supporting coups—as we have in Chile, Guatemala, Brazil, and the Dominican Republic.”

More than 70 academics and experts have issued an open letter demanding the administration “cease interfering in Venezuela’s internal politics,” and Democratic Rep. Ilhan Omar (Minn.) and Sen. Kamala Harris (Calif.) have called for the U.S. to completely rule out any military action.

Bolton, meanwhile, has maintained his threats on behalf of the administration. Asked by Hewitt on Friday whether he’d requested that the Pentagon draw up plans for military intervention in Venezuela, Bolton responded:

“You are a persistent questioner, Hugh. All I’ll say is all options are on the table.”

Bolton just threatened Maduro with a stay at Guantanamo. Yiiiiikes.https://www.elnuevoherald.com/noticias/mundo/america-latina/venezuela-es/article225392815.html … 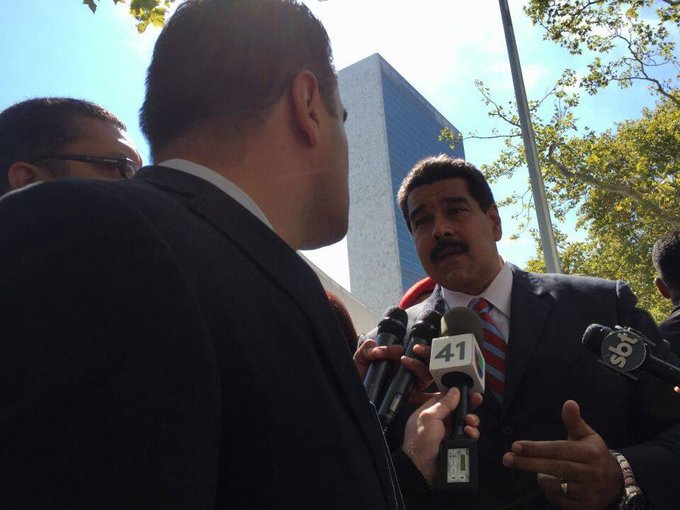 This work is licensed under a Creative Commons Attribution-Share Alike 3.0 License

Trump’s Efforts to Oust Maduro Are Illegal and Will Kill More Venezuelans
The original source of this article is Common Dreams
Copyright © Jessica Corbett, Common Dreams, 2019