“As a matter of fact, of the 92 elections that we’ve monitored, I would say the election process in Venezuela is the best in the world.”

First published in September 2012 prior to Venezuela’s October 2012 presidential elections, in which Chavez was reelected.

Former US President Jimmy Carter claimed Venezuela’s electoral system is “the best in the world” (agencies).

Mérida, 21st September 2012 (Venezuelanalysis.com) – Former US President Jimmy Carter has declared that Venezuela’s electoral system is the best in the world.

Speaking at an annual event last week in Atlanta for his Carter Centre foundation, the politician-turned philanthropist stated,

“As a matter of fact, of the 92 elections that we’ve monitored, I would say the election process in Venezuela is the best in the world.”

In the context of the Carter Centre’s work monitoring electoral processes around the globe, Carter also disclosed his opinion that in the US “we have one of the worst election processes in the world, and it’s almost entirely because of the excessive influx of money,” he said referring to lack of controls over private campaign donations. 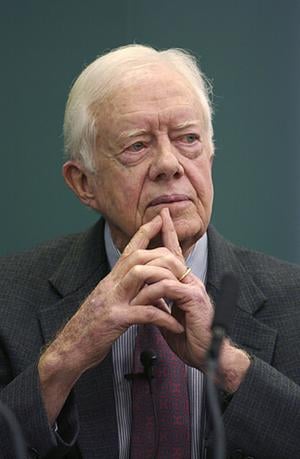 The comments come with just three weeks before Venezuelans go to the polls on 7 October, in a historic presidential election in which socialist incumbent President Hugo Chavez is standing against right-wing challenger Henrique Capriles Radonski of the Roundtable of Democratic Unity (MUD) coalition.

“he [Carter] has spoken the truth because he has verified it. We say that the Venezuelan electoral system is one of the best in the world”.

Chavez also reported that he had had a forty minute conversation with the ex-Democrat president yesterday, and said that Carter, “as Fidel [Castro] says, is a man of honour”. The Carter Centre has recently confirmed it will not send an official delegation to accompany the presidential election, but may have officials observe the process on an individual basis.

The delegation’s head, former Argentinian vice-president Carlos Alvarez, mentioned that this was the Unasur’s first electoral observation mission, and that “for us it’s fundamental to consolidate our democracies, because it’s taken us a lot of struggle, effort and time to establish [democracy] in our countries”.

In press comments after meeting with officials from Venezuela’s National Electoral Council (CNE) Alvarez declared that based on his experience of electoral observation in South America, ”Venezuela has one of the most advanced electoral systems in the region and the continent, that grants a great deal of confidence and transparency”.

Meanwhile, secretary of the MUD, Ramón Guillermo Aveledo, accused the CNE yesterday of being “biased”, and said that it doesn’t adhere to the National Constitution nor electoral law. In an interview with opposition TV station Globovision, he clarified his opinion that “we [the MUD] trust the voting system” but that CNE officials “have a preference” for the government.

The CNE has issued warnings regarding both the MUD and Chavez’s Carabobo Command for infringements of campaign rules relating to electoral publicity and advertising space.

Pro-Chavez sources have speculated that the opposition is planning not to recognise the CNE results in the likely event of a Chavez victory on 7 October. In July, Chavez and Capriles signed an accord by which both agreed to recognise the result announced by the CNE.