The Official Skripal Story is a Dead Duck

One of the striking things about the official Skripal story is the way its more wildly improbable aspects have been released to the mainstream media over a long period, so as to manage their impact. So, for example, police acknowledgement that the perfume bottle Charlie Rowley found was sealed and could not have been the container used on the Skripals is comparatively recent, and it took nine months for us to learn that, by a truly wonderful coincidence, the first person to find the Skripals ill on the bench was the Chief Nurse of the British Army.

I covered these points in full in my article on the ten points I do not believe in the official story – an article which nobody has sought to refute, other than to yell “conspiracy theory”, as though that was an argument.

But today we learn from the Guardian (quoting the New York Times) that Donald Trump was only convinced to back the UK government line after being shown photos of dead ducks and hospitalised children by CIA director Gina Haspel.

The Costs of 9/11 Continue to Mount. The Official Government Account of 9/11 is False

The problem is that, there were no hospitalised children. No children have been reported as becoming ill following their duck feeding with the Skripals. We have heard from one of the parents that they were shown by the police extremely clear CCTV footage of the duck feeding, which has never been made public. Surely if the child had been hospitalised, the parent would have been mentioned it? 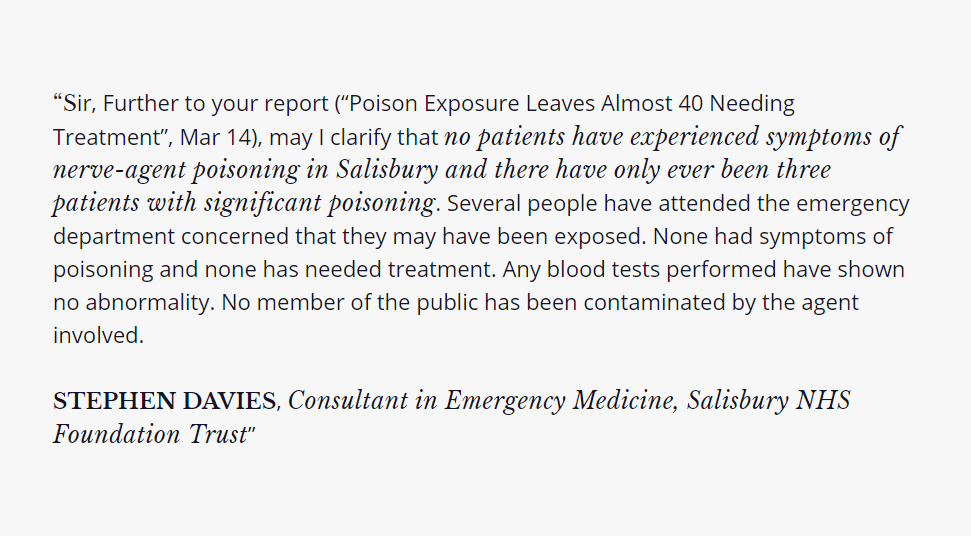 Dr Stephen Davies of Salisbury Hospital’s letter of 16 March 2018 to the Times has been explained away as poorly written or edited, in relation to the cause of the Skripals’ illness. But be that as it may, one thing the doctor’s letter does without any shadow of a doubt, is rule out the possibility of hospitalised children.

There were no hospitalised children.

We also know that the duck feeding was the time that “Boshirov and Petrov” were physically closest to the Skripals. But this is the first time there has ever been any mention of any harm to the ducks. Dead ducks would have been noticed by the public.

Possibly the Guardian and New York Times are inventing utter drivel, as in the Manafort meeting Assange story. That would in itself be worrying. The other possibility is that the security services produced fake photographs of hospitalised children and slaughtered some ducks, in order to convince Donald Trump. If the latter explanation is true, then the entire Skripal saga looks more and more staged.