As expected, Trump used his veto tonight to reject S.J.Res. 7, the antiwar Yemen resolution passed by both houses of Congress earlier this year.

Trump has been a supporter of the war on Yemen for years, and since taking office he has increased U.S. involvement in the conflict and vehemently resisted every attempt by Congress to curtail or end U.S. support for the Saudi coalition. He inherited this indefensible policy from Obama, but unlike many other Obama policies that he couldn’t wait to undo he continued and expanded on this one. His embrace of the Saudis and their war has been a major part of his foreign policy, and with this veto he has defined his presidency with his abject subservience to Riyadh and his complete indifference to the world’s worst humanitarian crisis. Trump has spent the last two years covering up for the Saudi coalition and their war crimes, and today he has used his veto to shield them from the consequences of their action one more time. 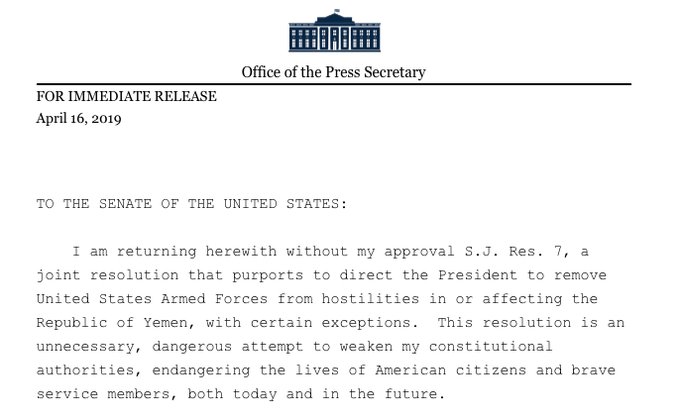 President Trump has just issued the second veto of his presidency, rejecting a resolution from Congress to end U.S. military support for the Saudi-led war in Yemen. Trump calls it a “dangerous attempt to weaken my constitutional authorities.”

Withdrawing U.S. support from the Saudi coalition endangers no Americans, and it is another one of his scurrilous lies for Trump to say so. Reining in a lawless executive has been long overdue, but it is no surprise that the lawless occupant of the White House refuses to accept limitations on what he can do. It falls back to Congress again to use every means at their disposal to shut off all military assistance to the Saudi coalition governments and to cut off all funding to U.S. operations that provide them with support. Trump’s continued enabling of the atrocious war on Yemen should be made into a major issue in the presidential election, and he should be forced to defend his disgusting actions to the voting public. Congress must continue to do all they can to force an end to our government’s illegal, unauthorized involvement in this war.

A veto from President Trump would send its own sobering message to Yemeni families caught in the daily hell of war: our administration simply does not care. The people of Yemen and the parties to the conflict are watching closely and the messages US leaders send have the power to save lives. With a veto, they lose faith in the United States and see the end to their suffering a little further out of reach. Congress must act to keep up the pressure, and not let President Trump’s cynical, transactional and heartless brand of politics define America’s role in the world. Now Congress must act to end arms sales to all parties fighting in this brutal conflict.

Today Trump has proven once more to the people of Yemen just how cynical he and the other supporters of the war are. Support for the war on Yemen is the most disgraceful U.S. policy today, and it is one of the most despicable policies of the last fifty years. That is what Trump chooses to continue and defend. He has chosen again and again to cater to and indulge some of the worst governments on earth, and he has done so for the basest reasons of protecting future weapons sales. If we knew nothing else about him, this would tell us all we need to know about his contempt for the law, his cruelty, and his disregard for innocent life.