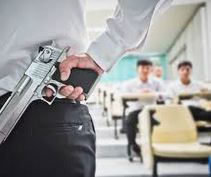 Florida teachers will be able to carry guns in classrooms after undergoing police-style training and a psychiatric evaluation. Opponents say fewer guns should be on schools and the policy is prone to deadly accidents.

May 01, 2019 “Information Clearing House” –   Florida lawmakers passed legislation on Wednesday allowing more teachers to carry guns in the classroom. It is the latest response to last year’s deadly shooting at a Parkland high school.

Florida’s Republican-majority House of Representatives voted 65 to 47 to pass the bill, which Governor Ron DeSantis is expected to sign into law. The state Senate approved the measure last week.

The bill enables teachers in school districts that wish to participate in the voluntary “guardian” program to carry a weapon in the classroom after passing a 144-hour training program and undergoing a psychiatric evaluation.

Ahead of passage of the new legislation, school employees in 40 of Florida’s 67 counties had already enrolled in, or stated they planned to take, the police-style training course, a spokesman for the Speaker of the House said.

Quick defense or unwarranted risk? The massacre at the Marjory Stoneman Douglas High School in Parkland in February last year left 17 people dead and 17 wounded, when a former student armed with a semiautomatic weapon rampaged through the school. Survivors of the Parkland shooting have since become some of the country’s most vocal advocates for gun control.

“It allows the good guys to stop the bad. The bad guys will never know when the good guys are there to shoot back,” said Republican Representative Chuck Brannan, a retired law enforcement officer. “The guardian is the last line of defense. He or she will be there when a police officer is not.”

Opponents argue guns don’t belong in the classroom and point to the danger that armed teachers may accidentally fire their weapon or police could mistakenly take a teacher for an assailant during a crisis. Teachers unions were against the bill, and school boards in some of the most populous counties in the state have voted against joining the guardian program.

Highlighting the possible risks, a Florida police officer on Tuesday accidently discharged a holstered gun at a middle school cafeteria when he leaned against a wall, the Pasco Sheriff’s Office said. The bullet went into the wall behind the officer and nobody was injured.

Florida lawmakers rushed through legislation after the Parkland shooting that required schools to place at least one armed staff member or police officer on campus.  The law allowed some school personnel to carry weapons, but guns were still banned from the classroom.

This article was originally published by ” Deutsche Welle” –