May Day 2019: Unite Against War in Venezuela!

Let us act in solidarity with the people of Venezuela. Let us stand united against war. (Graphics by Massoud Nayeri)

Juan Guaido has been groomed for 15 years as a long-term CIA project. His coup attempt yesterday, which so far appears to have stalled, was the culmination of these efforts to return Venezuela’s oil reserves to US hegemony. (Craig Murray)

“Millions of Venezuelans are mobilized in citizen assemblies to defend the revolution from internal and external efforts to undermine it, what Chavismo is all about, supporting the country’s social democracy, hostile to US imperial aims to destroy it.” (Stephen Lendman) 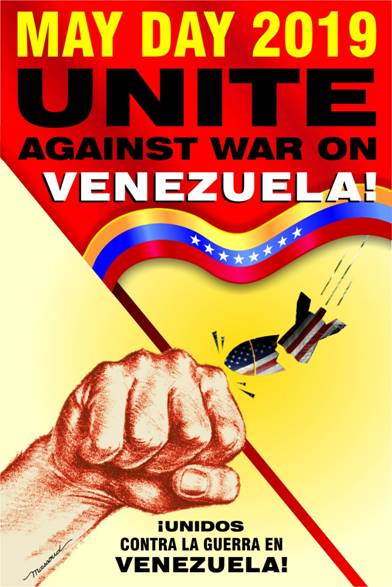 What is important to know, though, is that throughout the day of the attempted coup, 30 April, the US State Department, in the person of the pompous Pompeo, accompanied by the National Security Advisor, John Bolton, kept threatening President Maduro in a press round. Pompeo directly menaced President Maduro, saying –

“If they ask me if the US is prepared to consider military action [in Venezuela], if this is what is necessary to restore democracy in Venezuela, the President [Donald Trump] has been coherent and clear: The military option is available, if this is what we have to do.”– These threats are repeated throughout May 1 – day after the Venezuelan attempted coup defeat by both Pompeo and warrior Bolton.

Pompeo’s audacity didn’t stop there. He went as far as suggesting to President Maduro to flee to Cuba and leave his country to those that will bring back (sic) freedom and democracy. (Peter Koenig)

“But here’s the rub for a clueless Trump and his warmongering psychopaths: the mobilization of a “civil-military alliance” (una alianza cívica-militar) against the invaders. The military has not gone over to Guaidó and the upper classes for two simple reasons: military leaders were not trained at the School of the Americas during the rule of Chávez, and military officers were influenced by the teaching of Simón Bolivar and his ideas about national and popular sovereignty.” (Kurt Nimmo)

“Despite progressive critics and anti-war voices speaking forcefully against the Trump administration’s overt backing of the attempted coup d’état by rightwing opposition forces in Venezuela on Tuesday, 2020 Democratic frontrunner Joe Biden aligned himself with the White House by throwing his support behind the overthrow effort.(Jon Queally)

May Day 2019: Unite Against War in Venezuela!