Publishing Classified Material: Assange Is Not a Journalist (If Journalists Are Propagandists for the Ruling Class)

These were my remarks at an 05.03.2019 rally for Julian Assange and Chelsea Manning in San Francisco. The Bay Area Free Julian Assange Action Committee organized the rally.

High profile journalists have been jabbering about whether or not Julian Assange is really one of them. If “journalist” is understood to mean “propagandist for the ruling class,” then he most certainly is not.

However, if we go by the more common, less restrictive definitions, anyone who compiles and transmits information to a willing audience is a journalist. Some are good, most are awful, even evil, but Julian Assange is historic. Saying he’s not a journalist is like saying Charles Darwin wasn’t a biologist, Albert Einstein wasn’t a physicist, LeBron James can’t play basketball, and by the way, Galileo was wrong. The earth’s flat after all and we’re the center of the universe.

Assange is a genius who could have joined the club of tech billionaires, but instead he looked at global injustice with the mind of a systems analyst, then founded Wikileaks and the transparency movement. They put corporations and government, including the Pentagon, the FBI, the CIA, and all the other intel agencies on notice that they could no longer count on operating in secret. State and corporate scandals had been uncovered before, but there had never been anything like Wikileaks. It guaranteed sources anonymity if they used its dropbox secure technology, and it has never busted a source. It has published well over 10 million documents and never had to retract even one. Its decentralized technical infrastructure protects it from attack, and that strikes terror in the twisted psyches of Mike Pompeo and his inner circle of spies, murderers, and thieves without borders. If a global movement can free Julian Assange, with the full force of the national security state coming at him, it’ll be a game changer, perhaps even as historic as Wikileaks itself.

On the other hand, prosecuting and convicting Assange for the crime of possessing and publishing classified material would establish a precedent for convicting any journalist, media outlet, or citizen who publishes, republishes, cites, quotes, or even tweets classified material. There’s a growing list of classified Wikileaks that I could go to prison for quoting even though they’re not the ones that have shocked the world like the “Collateral Murder” video of US soldiers shooting Iraqi civilians from an Apache Helicopter as though they were playing video games.

One is “ETHNICITY IN RWANDA – – -WHO GOVERNS THE COUNTRY?” This is a cable generated in Rwanda on July 5, 2008. It doesn’t identify the sender, only the location it was sent from—Kigali, the capital of Rwanda. It could have been written and sent by one of many US officials: the US ambassador, a member of his staff, and/or any member of CIA, DIA, or other spooks in the region. The recipient is the US State Department, but no one in particular. 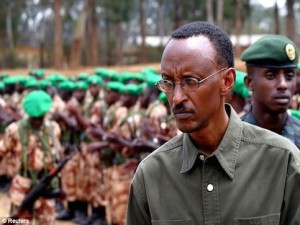 Whoever wrote this described Rwanda as an apartheid state exclusively ruled by an ethnic Tutsi elite headed by Rwandan President Paul Kagame. Most of all an English-speaking Tutsi elite who grew up in Uganda and joined Kagame in invading Rwanda from Uganda on October 1, 1990. The ninety days known as the Rwandan Genocide were not an isolated bloodbath, but the end of four-year war that began on that date. During that war Kagame’s army massacred Hutu civilians on a scale equivalent to or greater than the Tutsi massacres depicted in the movie Hotel Rwanda.

Ethnic reconciliation is one of the most boldfaced lies about Rwanda. For years we’ve been told that President Kagame was Rwanda’s savior, that he swept down out of nowhere to stop the genocide and ended the country’s long history of bitter Hutu and Tutsi competition. This US diplomatic cable from Kigali turns the reconciliation myth on its head, and the US State Department, including its higher-ups, know that. They’ve promoted the lie and lauded the criminal president for the last 25 years anyway. US elites put him in power, and he’s their man in Africa. He helps secure access to the trillions of dollars worth of strategic and critical mineral wealth in the Democratic Republic of the Congo, at staggering human cost. At the same time, 38% of Rwandan children, a majority of them Hutus, are stunted by malnutrition.

Rwanda’s brutal ethnic apartheid could lead to another bloodbath, and if it does, there’ll be blood all over US officials’ and elites’ hands. They know that’s what it is, and they’ve backed it up and exploited it for the last 25 years.

In February 2012, Wikileaks began publishing the Global Intelligence Files, 5 million emails leaked from Stratfor, an intel-for-hire outfit based in Texas.

In the introduction to this release, Wikileaks writes that ”they reveal the inner workings of a company that fronts as an intelligence publisher, but provides confidential intelligence services to large corporations, such as Dow Chemical Company, Lockheed Martin, Northrop Grumman, Raytheon and government agencies, including the US Department of Homeland Security, the US Marines, and the Defense Intelligence Agency. The emails show Stratfor’s web of informers, pay-off structure, payment-laundering techniques, and psychological methods. For example: ‘…Control means financial, sexual or psychological control.’ – CEO George Friedman to Stratfor analyst Reva Bhalla on 6 December 2011.”

There are emails about how Stratfor corrupted the press from Reuters to the Kiev Post.

There’s one email in which the Stratfor founder and CEO says he’d like to assassinate Julian Assange.

There’s another, also written by a Stratfor exec, that says there’s a secret indictment of Assange in a federal court in Virginia. We all know that now but that was back in February 2012.

There is a lot more about what Stratfor would like to do to Assange, but, moving on, there’s one about how to exploit an Israeli spy providing information on the medical condition of Venezuelan President Hugo Chavez back in 2011.

There’s another about a Stratfor subdivision called StratCap, whose goal is to use Stratfor’s information and analysis to trade in a range of global financial instruments, including government bonds, currencies, etc. It says that in 2011, a Goldman Sachs exec invested over $4 million in this scam and joined Stratfor’s board of directors.

There’s also one about Stratfor staff’s revolving door with government offices. Stratfor’s Vice-President for Intelligence, Fred Burton, was formerly a special agent with the US State Department’s Diplomatic Security Service and was their Deputy Chief of the counterterrorism division.

There’s one I take particular interest in headlined “Re: DISCUSSION – RWANDA/SOUTH AFRICA – Rwandans are cold ass mofos.” This describes the exploits of President Kagame’s assassination squads in Europe and Africa. Since I’ve been following their trail for the past ten years, I know more details than there are in the doc, so I wrote that one up under the headline “US Intel: Rwandans Are Cold Ass Mofos.”

Cold as these Rwandan mofos are, they couldn’t be colder than those trying to get their hands on Assange. They want to wreak vengeance on his body and mind, maybe even damage his outsized brain, and make a spine-chilling, blood-curdling example of him. So we’ve got to throw all we’ve got at stopping them.

Ann Garrison is an independent journalist based in the San Francisco Bay Area. In 2014, she received the Victoire Ingabire Umuhoza Democracy and Peace Prize for her reporting on conflict in the African Great Lakes region. She can be reached at ann@kpfa.org. She is a frequent contributor to Global Research.