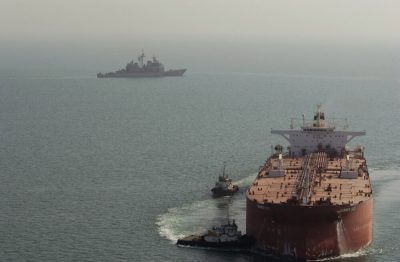 The May 12 explosions off the coast of Fujairah, United Arab Emirates–one of the oil-shipping hubs across the globe–has become a controversy shrouded in mystery that could serve the interests of those seeking escalated tensions in Iran relations.

With details of the incident remaining obscure over a week later, it’s still unclear what happened and who was behind the explosions.

But a close look at the coverage of the incident by Western corporate media indicates they parroted the UAE/Saudi narrative and assisted them to cover up the real magnitude of the incident, instead of practicing skeptical professional journalism.

Media also worked hand in hand with the two oil kingdoms and also some western governments to implicate Iran in the case.

This is while there are plausible reasons those governments could have incentives to distort the genuine account and point a finger at Iran.

The incident was first emerged on May 12 morning by the Beirut-based TV channel Al-Mayadeen, which quoted “Gulf sources” as saying explosions were heard at the port, and seven ships anchored nearby had been damaged.

The Fujairah Media Office initially dismissed the reports, insisting it was business as usual at the port.

In the evening, however, the UAE Foreign Ministry released a short, vague statement that acknowledged the incident but sought to play it down.

The statement said only “four” of what it called “commercial vessels” had suffered “sabotage” near its territorial waters close to Fujairah, and there were no injuries, and no spill of chemicals or fuel.

Outlets in Russia, India, Iran and elsewhere immediately picked up the Al Mayadeen report, but the Western agencies were silent until hours later when the UAE issued its statement. 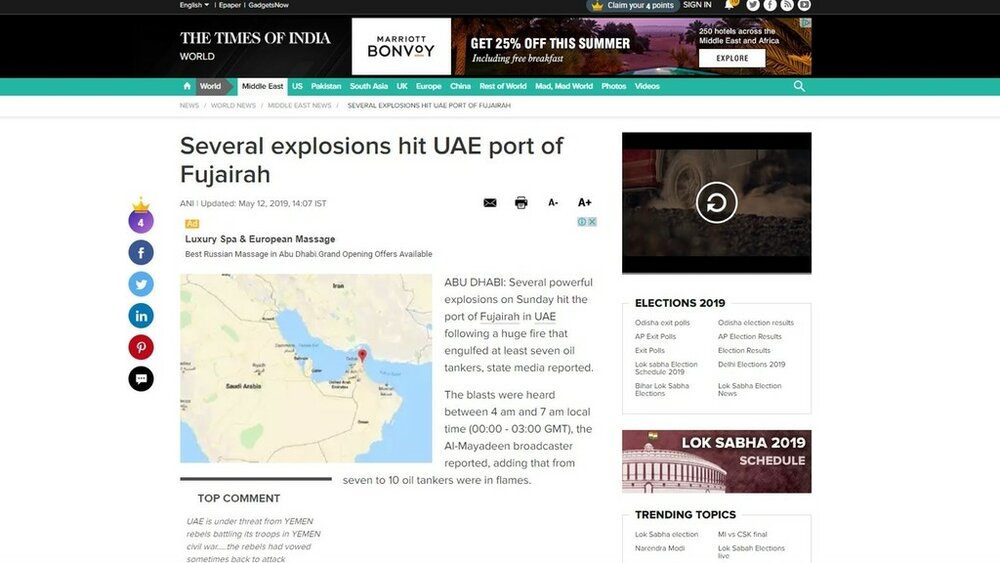 Russian, Iranian and Indian publications including the Times of India picked up the story from Al Mayadeen and reported there had been explosions.

Even after the Western agencies published reports on the incident, they simply repeated the UAE and Saudi narrative. Typically, Western news media echoed the “sabotage” as if it were fact, sourcing their information to the Saudi and Emirati officials. As an example, Time headlined one of its stories “The U.S. Issues a Warning Amid Reports of Ships Being Sabotaged off the UAE Coast”.

At this time, there was no verifiable information about the “sabotage.” All they had were claims from Saudi and UAE officials, the same people who claim people disappear into thin air while in consulates, or that Yemeni children are massacred in air strikes by “mistake,” or that political dissidents are “terrorists” who must be beheaded by sword (FAIR.org, 5/15/19).

The Western agencies chose not to question the UAE/Saudi claims about what had happened.

Instead, some agencies inquired claims disputing the UAE/Saudi narrative, perhaps to further legitimize their account of the incident. As an instance, Reuters (5/12/19) contacted “trading and industry sources” and wrote in the third paragraph of its article that “operations were running smoothly” at the port.

Moreover, the US-based Associated Press (5/12/19) reported that claims by the “pro-Iran” Al-Mayadeen that “explosions had struck Fujairah’s port” were “false,” after it spoke to Emirati officials and local witnesses. AP makes the accusation in the lead of its main article on the incident, indicating the agency wants to put particular emphasis on its claim. The Al-Mayadeen report attributed to “Gulf sources” might contain some inconsistencies, but it seems AP appeared more like an advocate for the UAE and Saudi Arabia than a neutral news agency just doing its job.

Most other Western news media adopted the same reliance on the official Saudi and Emirati claims.

One wonders if Western outlets would treat the incident the same way if Saudi Arabia or the UAE were not client states who lavishly exchange their nations’ petrodollars for the West’s support.

And this is not something new. The western outlets, claimed to be freest and fairest in the world, have for a very, very long time been favoring Saudi Arabia and its wealthy Arab neighbours in their reporting.

An interesting illustration is New York Times, which for over 70 years has been working to put the Saudi family in a good light, according to a report.

A more recent example was the case of Jamal Khashoggi’s slaughter. Four days into the late journalist’s disappearance, the Saudi government gave an exclusive tour of the building to Reuters to demonstrate that Khashoggi was not there. Amusingly, Reuters quotes Saudi consul-general Mohammad al-Otaibi as saying there was no footage of Khashoggi inside the building as “the consulate was equipped with cameras but they did not record footage”! However, Reuters refuses to bring into question al-Otaibi’s account, as if the whole report was an expensive advertorial.

The same Western agencies who seem so credulous when citing Saudi/Emirati claims are highly skeptical toward assertions by official enemies like Iran. As an illustration, some Western agencies sought to cast doubt on Iran’s official account in 2017 when it launched missile attacks against ISIS positions in Syria; Reuters, for example, wrote in an article that “it could not independently verify the report” that Iran had targeted ISIS. In another instance, the Associated Press called into question an Iranian rocket launch in 2017 by headlining its report, “Iran Claims Launch of Satellite-Carrying Rocket Into Space.”

The behavior of the Western corporate media regarding the Fujairah incident was similar to their treatment of reports on Saudi port of Yanbu published earlier this month.

On May 6, several outlets in Yemen, Iran and elsewhere reported that powerful explosions had been heard in Yanbu, the main shipping terminal for Saudi exports to the US and Europe. Western agencies ignored the reports, toeing the line of Saudi officials, who refused to provide comment on them.

This is while similar attacks against the port in 2017 and 2018 had been confirmed by Saudi sources, including the state-funded Al-Arabiya, which in 2018 claimed the Saudi forces had destroyed a Yemeni ballistic missile en route to Yanbu.

Saudi Arabia and the UAE have an incentive to play down such incidents, lest the global oil market is negatively impacted at a time when escalating US pressure to cut off Iran’s oil exports has created worries over upsetting the oil market. The shortage of oil in the global markets, resulting at least partly from the US decision not to extend sanctions waivers for Iran’s oil customers, has already led to increased fuel prices in the US and Britain.

More than nine days into the incident, little information has been offered on what sort of weapon was used and who did it.
Yet many Western media linked the incident to the Iran/US standoff and went into detail regarding Iran’s role in the region, implying that Iran was the main culprit. Many outlets, notably BBC, Reuters, and AP, covered extensively claims by the US officials that Iran was most likely behind the case but failed to report Iran’s position.

This is while Iranian officials almost immediately condemned the attacks, with Iran’s Foreign Ministry spokesperson warning against a “conspiracy orchestrated by ill-wishers” and “adventurism by foreigners” to undermine the Gulf region’s stability and security.

Taking into account the incident came at a particularly sensitive time in the region and as the US is stepping up its “maximum pressure” campaign against Tehran, one could easily argue the explosions could be a well-planned false-flag operation organized by a state actor to incite hostilities with Iran. 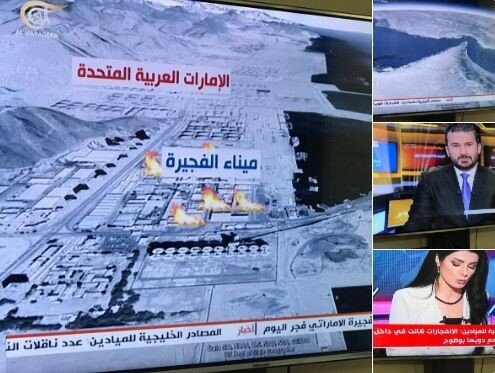 Al Mayadeen first broke the news oil tankers anchored just off the coast were on fire.

But given the US government’s eagerness to make accusations against Tehran and the corporate media’s willingness to suggest Iranian culpability, it appears that this incident could be seized upon by those eager to see tensions with Iran escalate.

With the results of a joint investigation by the UAE, the US and France to be announced in the coming days, one could anticipate western governments who have been busy wreaking havoc in the Middle East for the past couple of decades to rush to accuse Iran of disrupting peace in the region and call for measures to protect “security” and “stability” in the Persian Gulf.

The UAE has refused to elaborate on the nature of the “sabotage,” perhaps to prepare the ground for a powerful smear campaign against Iran, aided by outlets who feel no compunction about presenting unsubstituted claims as unchallenged facts.
Let’s hope the world has become smart enough not to be fooled into buying lies.

This article was originally published on Tehran Times.

All images in this article are from Tehran Times