On this Memorial Day weekend all Americans should look back to the great essay written in 1935 by Marine General Smedley Butler. He named it ‘War is a Racket’ and it still resonates nowadays perhaps even more powerfully. His essay should be required reading for all high school American History students. General Butler acknowledged that he became a ‘Gangster’ for the US corporate interests internationally.

Realizing that what we call ‘War’ is many times just an excuse for private business interests to A) make mega bucks from our tax dollars and B) to control the resources and markets of overseas nations, all under the protection of our flag. Has anything changed?

Don’t you who ‘know better’, as to this empire, just love it when you turn on the boob tube lately and see those Army, Marines and Navy commercials?

How about the one that shows soldiers in 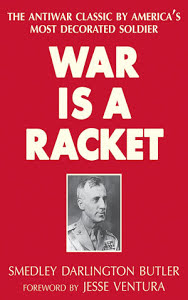 combat, aiming their weapons and wearing similar gear to what Art Carney wore as a sewer ‘denizen’ on The Honeymooners?

The narrator of the commercial says something to the effect of ‘Warriors wanted’.

The Navy has one that says: Around the world, around the clock, in defense of all we hold dear back home. America’s Navy’.

You drive in your car and see the license tags advertising one of the military branches. How about those bumper stickers saying “Proud Mom of a Marine” or “Proud Grandparent of a Marine” …

Usually right near a ‘Trump 2020’ sticker (Some of the car owners still have their ‘Bush/Cheney’ ones)?

You are watching a major league baseball game on the boob tube and all the players and coaches are wearing camouflage caps and uniforms. Didn’t you know that each Monday is ‘Military Monday’? The worst case scenario is when you tune in to watch any major sporting event. Way before the action begins they will have a giant flag draped across the field of play. Then as the national anthem is sung a color guard appears, dressed to the tees in full uniforms and carrying another flag. Well why not? We’re at War!

In this upcoming 2020 election cycle the overwhelming number of potential candidates, and of course the hypocrite Trump, stand in line to keep this obscene military spending alive and well… for whom? Not of course for the 300 million of us who cannot get the public services we need to live comfortably.

How can we, when over half of our federal taxes goes to some segment of what they label Defense Spending. Oh, they con us by calling most of it Discretionary Spending. It sure as hell does NOT go to the young men and women who serve in those overseas places that we had NO business ever being in! Yet, the phonies and hypocrites, and of course the fools who buy into this lie, lower their heads and give reverence to the ‘fallen heroes’. They were not heroes, in places like Vietnam all the way to the present day concerning our illegal and immoral actions in the Middle East.

Rather, they are Pawns in this empire’s geopolitical War Games!

Yes, many of our military personnel were and are brave and stalwart… but NOT those who sent them!

All those generals with the tons of fruit salad on their chests were not then (in Vietnam) or now considered heroes to this writer. If they had any real conscience they would have said NO to follow the pied pipers over the cliffs of reason!

Philip A Farruggio is a contributing editor for The Greanville Post. He is also frequently posted on Global Research, Nation of Change, World News Trust and Off Guardian sites. He is the son and grandson of Brooklyn NYC longshoremen and a graduate of Brooklyn College, class of 1974. Since the 2000 election debacle Philip has written over 300 columns on the Military Industrial Empire and other facets of life in an upside down America. He is also host of the ‘It’s the Empire… Stupid‘ radio show, co produced by Chuck Gregory. Philip can be reached at paf1222@bellsouth.net.

The original source of this article is Global Research
Copyright © Philip A Farruggio, Global Research, 2019
https://www.globalresearch.ca/the-war-racket-continues-84-years-later/5678596