During the lengthened Memorial Day weekend, Chicago police responded to 42 people shot, seven of whom died of their injuries.

The violence was slightly above average for this time of year, according to homicide data indexed by the Chicago Tribune.

Chicago Mayor Lori Lightfoot told reporters on Monday that the surge in violent crime over the weekend “is just an unacceptable state of affairs.”

“I certainly knew that before, but to see it graphically depicted is quite shocking and says that we’ve got a long way to go as a city,” she said. “This is not a law enforcement-only challenge. It’s a challenge for all of us in city government. It’s a challenge for us in communities to dig down deeper and ask ourselves what we can do to step up to stem the violence.“

Lightfoot stressed that gun violence is not how residents should resolve disputes.

“For those who think it is, we can give them no quarter, they can have no sanctuary in our city,” she said. “We’ve got to make sure we flood these areas with a lot more resources.”

Police Superintendent Eddie Johnson also told reporters a new program to crack down on illegal guns had been implemented to curb gun violence.

The extended holiday weekend, combined with elevated temperatures, allowed more people to hit the streets, therefore some neighborhoods across Chicago transformed into warzones. Leading up to the weekend, Chicago police raided several trap houses and added addition shifts to patrols. 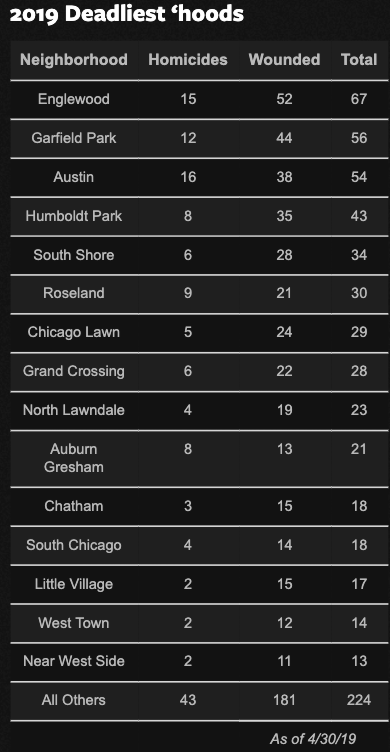 Since Friday afternoon, the shootings stretched from Roseland to West Rogers Park. The Tribunenotes the epicenter of the violence was in the South and West sides of the city that are considered low-income areas.

As shown in the chart below, shootings and homicides ramped up into the holiday weekend and exploded on Sunday. From 5/26 through 5/28, three people were shot and killed, 21 people shot and wounded, and a total of 5 homicides.

However, the violence subsided on Monday due to inclement weather, which deterred people from congregating on city streets.

For the month, 40 people have been shot and killed, 175 people shot and wounded, and a total of 43 homicides.

Year to date, 174 people have been shot and killed, 720 people shot and wounded, and a total of 189 homicides.

Every 3 minutes and 57 seconds, someone in Chicago is shot. A person is murdered about ever 18.5 hours.

And according to HeyJackass!, an online crime statistic website, the current forecasts show about 200 homicides and an additional 950 shooting from now to Labor Day weekend.

Featured image is from Chicago Tribune

NATO Invades Chicago: But Where is the “Responsibility to Protect” (R2P) for Citizens in this War-Zone City?
The original source of this article is Zero Hedge
Copyright © Zero Hedge, Zero Hedge, 2019
https://www.globalresearch.ca/42-people-shot-chicago-memorial-day-weekend/5678895