Not only has Canada financed and otherwise supported opposition parties in Venezuela, Ottawa has allied with some of its most anti-democratic, hardline elements. While the Liberal government has openly backed Voluntad Popular’s bid to seize power since January, Ottawa has supported the electorally marginal party for years.

Effective at stoking violence, VP has failed to win many votes. It took 8% of the seats in the 2015 elections that saw the opposition win control of the National Assembly. With 14 out of 167 deputies in the Assembly, it won the four most seats in the Democratic Unity Roundtable coalition. In the December 2012 regional elections VP was the sixth most successful party and did little better in the next year’s municipal elections.

VP was founded at the end of 2009 by Leopoldo López who “has long had close contact with American diplomats”, reported the Wall Street Journal. A great-great-grand nephew of independence leader Simón Bolívar, grandson of a former cabinet member and great-grandson of a president, López was schooled at Harvard’s Kennedy School of Government. Between 2000 and 2008 López was the relatively successful and popular mayor of the affluent 65,000 person Caracas municipality of Chacao.

During the 2002 military coup López “orchestrated the public protests against [President Hugo] Chávez and he played a central role in the citizen’s arrest of Chavez’s interior minister.” He was given a 13-year jail sentence for inciting and planning violence during the 2014 “guarimbas” protests.

Canadian officials have had significant contact with López’s emissaries and party. In November 2014 Lilian Tintori visited Ottawa to meet foreign minister John Baird, Conservative cabinet colleague Jason Kenney and opposition MPs. After meeting López’s wife, Baird called for his release and other “political prisoners”, which referred to a number of other VP representatives.

Three months later VP National Political Coordinator Carlos Vecchio visited Ottawa with Leopoldo López’s sister Diana López and Orlando Viera-Blanco to speak to the Subcommittee on International Human Rights of the Standing Committee on Foreign Affairs and International Development. At a press conference, “Popular Will’s international wing” denounced the Venezuelan government and spoke at a McGill University forum on “Venezuela in Crisis: The Decline of Democracy and the Repression of Human Rights.”

Vecchio was appointed as the Guaidó phantom government’s “ambassador” to the US and Orlando Viera-Blanco was named its “ambassador” to Canada. In October 2017 Vecchio and VP deputy Bibiana Lucas attended the anti-Maduro Lima Group meeting in Toronto.

In June 2015 VP councillor of Sucre, Dario Eduardo Ramirez, spoke to the Standing Senate Committee on Foreign Affairs and International Trade. In May 2016 VP Assistant National Political Coordinator Freddy Guevara and VP founding member Luis Germán Florido met foreign ministerStéphane Dion and members of the Senate’s Foreign Relations Committee to denounce Maduro’s government. During the trip VP’s Coordinator of International Relations Manuel Avendaño and an aide Abraham Valencia published an opinion in the Hill Times titled “Venezuela is on the brink of disaster. Here’s how Canada can help.”

The Canadian embassy in Caracas and former ambassador Ben Rowswell worked with VP officials pushing for the overthrow of the elected government. The runner-up for the embassy’s 2012 “Human Rights Prize”, Tamara Adrián, represents VP in the National Assembly. At the embassy during the presentation of the 2014 human rights award to anti-government groups were López’s lawyers and wife. In response, then president of the National Assembly Diosdado Cabello accused Rowswell of supporting coup plotters.

The Montreal based Canadian Venezuelan Engagement Foundation is closely aligned with VP. Its president is Guaidó’s “ambassador” to Canada — Viera-Blanco — and its founding director is Alessa Polga whose LinkedIn page describes her as VP Canada’s Subcoordinator and IntergovernmentalRelations. Polga has been invited to speak before the House of Commons and in 2017 demandedCanada follow the US in adopting sanctions on Venezuela. Justin Trudeau offered words of solidarity for a recent Canadian Venezuelan Engagement Foundation “Gala for Venezuela” in Toronto. 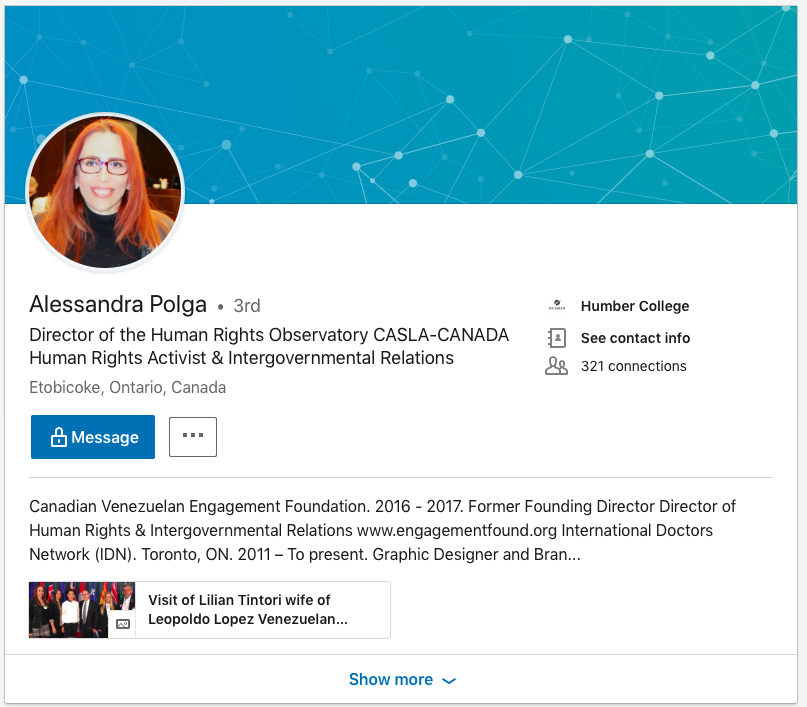 In 2014, 2016, 2017 and 2018 VP youth outreach leader and former mayor David Smolansky spoke at the Halifax International Security Conference. During his 2018 trip to Nova Scotia Smolansky published an opinion piece in the Halifax Chronicle Herald claiming, “more than just a failed state, Venezuela is a criminal state.”

In May 2017 Tintori met Prime Minister Justin Trudeau and the leaders of the opposition parties. In response, Venezuela’s Foreign Affairs Minister Delcy Rodríguez described Lopez’s wife as an “agent of intervention” who claims the “false position of victim” while she’s aligned with “fascist” forces in Venezuela.

Three months earlier Tintori met US President Donald Trump and The Guardian reported on her role in building international support for the plan to anoint VP deputy Guaidó interim president. According to the Canadian Press, Canadian diplomats spent “months” working on that effort and the Associated Press described Canada’s “key role” in building international support for claiming a relatively marginal National Assembly member was Venezuela’s president. Presumably, Canada’s “special coordinator for Venezuela” organized these efforts which included foreign minister Chrystia Freeland speaking to Guaidó “the night before Maduro’s swearing-in ceremony to offer her government’s support should he confront the socialist leader.” Prime Minister Justin Trudeau has spoken with Guaidó at least twice since.

Canada has strengthened VP’s hardline position within the opposition. A February Wall Street Journalarticle titled “‘What the Hell Is Going On?’ How a Small Group Seized Control of Venezuela’s Opposition” noted that leading opposition figures on stage with Guaidó when he declared himself interim president had no idea of his plan despite it being reliant on the Democratic Unity Roundtable’s agreement to rotate the National Assembly presidency within the coalition. (VP’s turn came due in January).

Venezuelans require a vibrant opposition that challenges the government. They don’t need Canada to boost an electorally marginal party that drives the country into increasing conflict.

Posted by Jaime C. on May 31, 2019 in Uncategorized and tagged Canada, Venezuela.