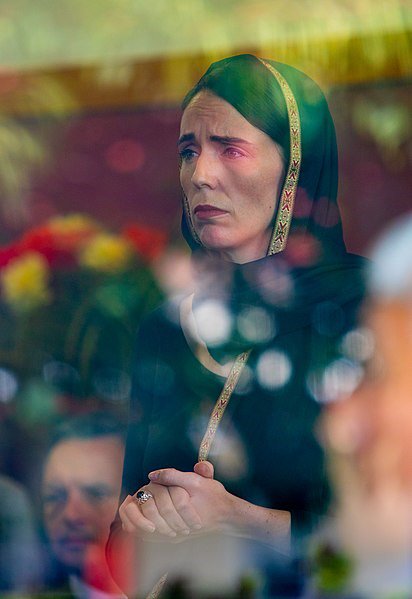 Although one cannot even attempt to get past the horrific Christchurch massacre, nonetheless Jacinda Ardern’s response as a leader to the cruel tragedy is commendable. Some of the key and necessary policy steps Ardern took was vowing not to name the attacker, ban his inhumane manifesto and ban semi-automatic as well as assault rifles in New Zealand. Nevertheless, the banned manifesto and the heinous acts of terrorism committed by the 28-year-old Australian does not take away the fact that he used semi-automatic weapons to fire indiscriminately at men, women and children, killing 50 and injuring another 50 in two Christchurch mosques. It does not negate the fact that he planned his attack well before carrying it out, so much so that he wrote a 74-page manifesto – which was initially a 240-page document – titled ‘The Great Replacement: Towards a New Society’.

The manifesto is the culmination of white nationalism and fascist ideology – which the attacker very proudly accepts to be associated with – citing the ‘white genocide’ theory that preposterously claims that white people are being driven into a demographic change. He takes inspiration from other white nationalist terrorists that also used weaponry to commit mass shootings such as Andres Breivik – who killed 77 people in Norway in 2011 – and Dylan Roof – who killed 9 African-Americans in a church in Charleston in 2015.

Al-Noor Mosque in Christchurch and the Martyrs – via Wikimedia Commons

If someone thinks that Christchurch was a one-off act of Islamophobia, and that the demented 28-year-old was merely a ‘bad apple’, they need to remind themselves of what followed the Christchurch attacks. Following day, for example, as the world was coming to terms with the tragedy in New Zealand, white men attacked a Muslim worshipper outside East London Mosque in the UK with a hammer. The next day, a 50-year-old man shouting ‘white supremacy’ stabbed a 19-year-old Muslim teenager in Surrey, UK. The same day, a 23-year-old white man rammed his car into the gates of a mosque in Queensland, Australia. The Guardian reported that there had been an increase of 593% of anti-Muslim hate crimes in Britain after the Christchurch attacks.

Christchurch Shooting: Why Are We Not Using the Word Islamophobia? 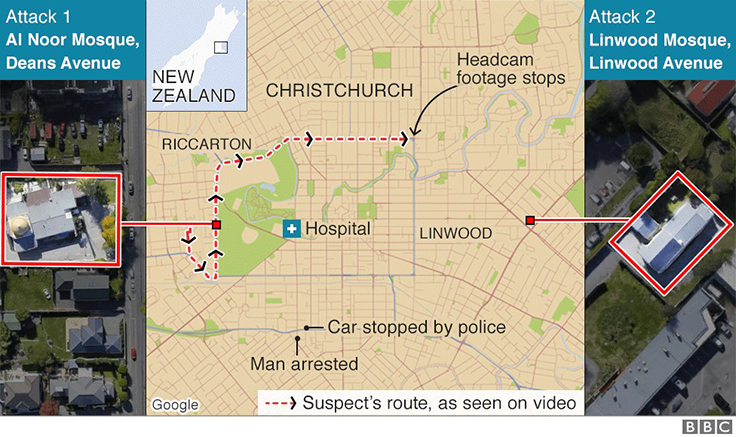 Islamophobia – or anti-Muslim hate crimes – unfortunately is not something new. It has existed well before the advent of media and globalisation. However, tragic and inhumane acts of terrorism such as 9/11 and 7/7 bombings have surely exacerbated Islamophobia as the media – both digital and social – together with publishing industry and certain political leaders have painted Muslims as this significant ‘other’ that somehow are to blame for the all the evils in the world – especially in the West. As a result, in Europe as well as North America, there has been a great receptivity towards anti-Muslim and other xenophobic sentiments – creating fascists like the Australian in Christchurch who have taken Islamophobia to an extreme level – by militarizing it.

Militarized Islamophobia is an undeniable and unfortunate reality. A quick walk down the immediate memory lane provides a stark testament of this extremely painful truth. August 2016, New York City’s borough of Queens witnesses an imam and his associate getting shot and killed on a busy street near the mosque. December 2016, 30-year-old man enters a mosque in Zurich, Switzerland and starts firing indiscriminately. January 2017, still fresh in the memories of many, 27-year-old enters the mosque in Quebec City, Canada and starts firing on worshipers, killing 9 and injuring many others.

In all of the above incidences of militarized Islamophobia, the fact that the attackers chose the place of worship for their attack suggests that they were well-prepared – like in Christchurch – with weapons and a plan or strategy mirroring that of a military mission or operation.

Weapon used in Christchurch Attacks – via The Namal

In this day and age, where anti-Muslim hate crimes have reached the new heights of militarized Islamophobia, it is pertinent that we as humans strongly condemn and crack down on the foundation of this menace – hate speech. Hate speech is not a freedom of expression if it results in the instigation of anti-Muslim and any other xenophobic, racist or offensive sentiments. Similarly, being politically correct does not mean not respecting each other and one another’s beliefs. The foundation of any Islamophobic, anti-Semitic, xenophobic, racist or any other derogatory behaviour is the propagation and dissemination of hate speech. Whether it be the Holocaust, genocides in Srebrenica and Rwanda, or the massacre of Muslims due to Islamophobia – they all seem to have one thing in common: all were triggered by the rhetoric of hate.

As Cora Alexa Døving of Norwegian Centre for Studies of the Holocaust & Religious Minorities, as well as Sabine Schifferfrom Media Responsibility Institute Germany point out, there are significant similarities between the Islamophobic discourse being spread today and the European pre-Nazi anti-Semitism. Same views are echoed by John Esposito, Edward Said, and Sipco Vellenga who in his comparative study on Islamophobia and anti-Semitism in the Netherlands argues that “Islamophobia is, just like anti-Semitism, deeply rooted in European history.”

It is perhaps time to look more deeply into what we publish, what we say, what we share and what we read. Clearly, the attack on Muslims through ‘words’ has translated into an attack through ‘arms’ – leading towards what is arguably a non-conventional but gradual genocide of Muslims. In the words of the Holocaust survivor Susan Pollack speaking to BBC about rising hate-speech, “It starts as a small stream, but then it has the potential to erupt – and when it does, it’s too late to stop it.”