The date chosen for this historic meeting had a symbolic character to it. During those four days a number of coinciding historical events were celebrated such as the birth of the Liberator Simón Bolívar, the assault on the Moncada Barracks that marked the beginning of the Cuban revolution and the 65th anniversary of the birth of Commander Hugo Chávez.

The Forum of Sao Paulo is the oldest continuing event of progressive unity in Latin America.  The first Forum was held in the city of Sao Paulo Brazil in 1990 as an initiative of the historic leader of the Cuban revolution, Fidel Castro Ruz and the then leader of the Workers’ Party of Brazil (PT), Luiz Inácio Lula da Silva. The two put out a call to political parties and organizations from Latin America and the Caribbean to discuss alternatives to neoliberal policies. Since then the Forum adopted the name of the city where it was born. Twenty-six countries from Latin America and the Caribbean make up the member countries of the Forum.

Today, the scenario of all Latin America is very different from previous forums. Of the two leaders who brought the idea of the Sao Paulo Forum to life, one is no longer physically present and the other one is serving an unjust sentence in a Brazilian prison for having had the audacity to lift 30 million Brazilians out of poverty. The triumph of the Bolivarian revolution in 1998, with the popular election of Hugo Chavez, opened the door to a new continental stage where progressive projects sprouted up in Brazil, Argentina, Uruguay, Bolivia, Ecuador and El Salvador.  The current situation is very different than it was then.  The integration of Latin America is now in jeopardy, and a number of countries in the region are led by puppet governments subordinate to the designs of the U.S. government. Venezuela has held on but it is in the cross hairs of the empire to bring about regime change at all costs. This reality made the Forum to be held in Venezuela all that more important.  Never before in the 29 years since its inception, has the host country been more besieged and blockaded than Venezuela today and it is here where the destiny of the Great Homeland lays in the balance.

Despite the difficult situation in this South American nation, whose only crime in the eyes of US imperialism has been to divert their vast natural resources for the betterment of those who had been poor and dispossessed, approximately 700 people merged with hundreds of Venezuelans in this critical 4 day meeting to discuss the burning questions of Latin America and also to reinvigorate the same spirit of regional integration sown by those who founded the Forum. Overall those in attendance came to show the world that Venezuela is not alone.

The Caracas Manifesto: Proposal and Promise at the Sao Paulo Forum 2019 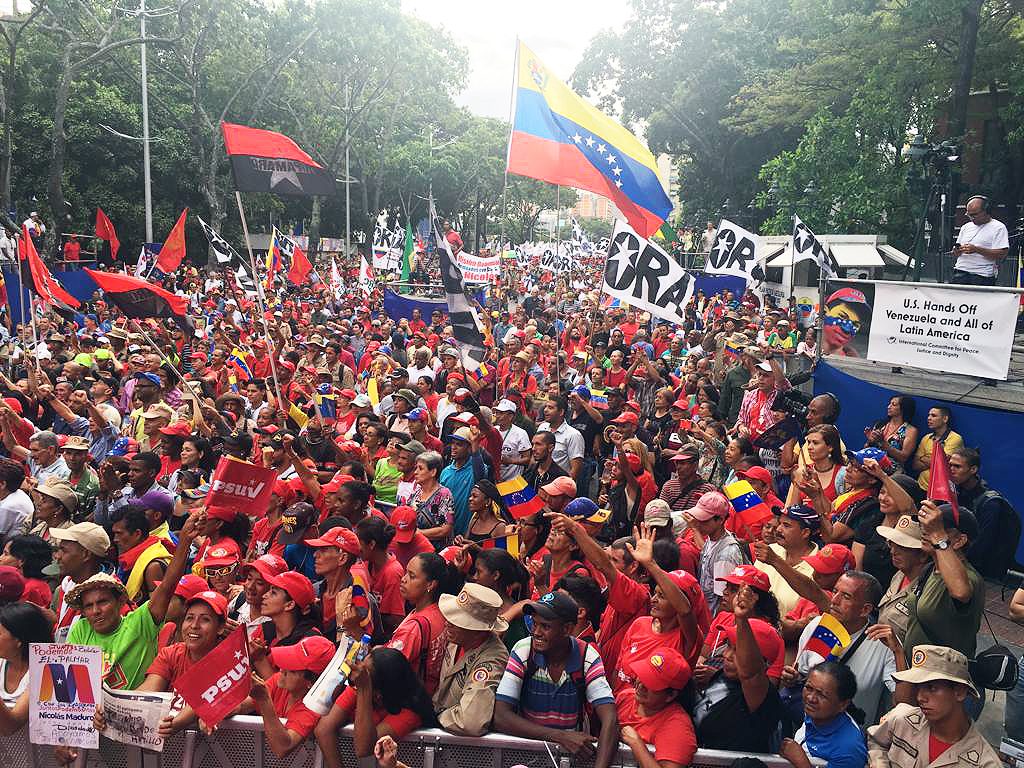 For those delegates coming from the United States they had to go through a series of added hurdles just to get there. After the suspension of diplomatic relations in January 2019 traveling to Venezuela has become more difficult with no direct flights from the US and no consulates to grant visas.  Nevertheless, activists were creative and found the way to be present including representatives of the Collective for the Protection of the Venezuelan Embassy in Washington DC who occupied and protected the embassy for 37 days.

During the opening ceremony of the Forum, the First Vice-President of the United Socialist Party of Venezuela (PSUV) and president of the National Constituent Assembly, Diosdado Cabello set the tone when told the enthusiastic audience

“No one will be able to do it alone, it is the unity of the people that is necessary. The more they insist, the more we are going to solve our problems; here in Venezuela the right wing will not be able to govern. The right likes elections when they win, when the people win they don’t like it, the right doesn’t respect the process. They can’t, their nature doesn’t allow them. The right-wing is the same everywhere, we feel the support of the people but those people also need our support. We resisted and marched with the conviction that we are going to win. The people here don’t get depressed because with Chavez they learned to have a voice. We have even been threatened with everything including a military invasion, but we are willing to defend the Bolivarian revolution, which is a revolution for the peoples, not just for Venezuela. No one can do it alone.”

Other speakers included Monica Valente, of the Brazilian Workers’ Party, and the Executive Secretary of the Sao Paulo Forum and the Ambassador of the Bolivarian Republic of Venezuela to Cuba, Adan Chávez. Also Julio Muriente Pérez, member of the National Hostosian Independence Movement of Puerto Rico. Muriente talked about the popular victory that just took place in Puerto Rico.

“Thousands of Puerto Ricans raised the flag of dignity forcing the corrupt governor Ricardo Rosello to resign.” he said, as the audience stood up cheering, “It wasn’t that he resigned, the people took him out.”

It is important to note that this was not just a talking conference but a meeting of activists who on Saturday went out to the street along thousands of Venezuelans to call for the US hands off Venezuela and all of Latin America. In all meetings inside and the rally outside, participants expressed their support to the only president of Venezuela elected by popular will, Nicolas Maduro Moros.

During the last day of the Sao Paulo Forum, Venezuela’s President Nicolas Maduro reiterated his gratitude to the members of the Protection Collective of Venezuela’s Embassy in Washington.

“Their performance reflects high morals for the defense of the dignity and sovereignty of the Venezuelan people,” the president said.

He presented the activists with a replica of Simon Bolivar’s sword.

The closing ceremony took place after a walk to the Cuartel de la Montaña, in the 23 de Enero neighborhood, where the remains of Hugo Chávez rest. Present at the closing were Presidents Nicolas Maduro, President of Cuba Miguel Díaz-Canel, Diosdado Cabello, and Mónica Valente.

A Final Declaration of support for Venezuela, Cuba, Nicaragua and other progressive governments under attack by US imperialism, and a demand for the freedom of Lula and other left-wing leaders imprisoned for political reasons was issued.

What the XXV Sao Paulo Forum demonstrated most was the essential and immeasurable examples, inherited from Fidel, to guide the revolutionaries of Latin America and the Caribbean; that is the unity of the left progressive forces and the practice of internationalism.