Nothing new with the crimes committed by the Turkish pariah Erdogan’s most loyal terrorists in Syria, like their sponsor Erdogan and like Israel, they are not satisfied with the crimes they commit upon entering a town, and during their presence, they continue before they leave.

In their advance to clean more of the Hama northern countryside and Idlib’s southern countryside from NATO’s Al-Qaeda terrorists, especially after cleaning Al-Hobait, Zakat, and Al-Arbaeen towns, the Syrian Arab Army managed to clean a number of other towns, in some of them the Al-Qaeda FSA terrorists were so defeated they fled before the SAA arrived.

However, in Tal Al-Sakhr, Turkey’s agents destroyed the grain silos, farmers’ tractors, and planted a large number of landmines and IEDs (Improvised Explosive Devices) before fleeing the town after losing the battle to the Syrian Arab Army. They just had to accomplish their task of destroying as much as possible of the Syrian people’s dearest assets, infrastructure, and even food source.

Syrian News Agency SANA documented the terrorist war crimes in Tal Al-Sakhr, a short part of their video below. We apologize for the unrelated music in the video from the source:

Idlib and NATO’s War of Terror against the Syrian People 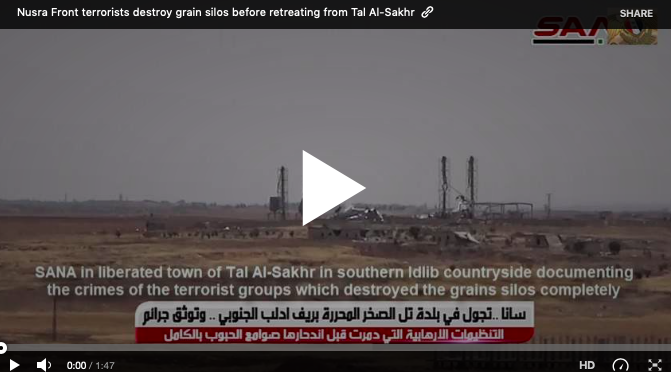 The systematic destruction of the pillars of the Syrian economy is one of the main targets of the US-led War of Terror against the Syrian people. From blowing up bridges, electric power stations, contaminating drinking water sources, destroying communication towers, to burning wheat fields, destroying silos after stealing the wheat to Turkey, dismantling and stealing factories to Turkey, blowing up public buildings, converting hospitals to terror command and prisons, blowing up hospitals, and not ending with planting landmines and explosives that they hope to continue to kill and maim Syrians, especially children, long after they’re gone.

US and EU sanctions and complete blockade against Syria manifested in its ugliest shape by confiscating a tanker carrying Iranian oil to the Mediterranean and trying to justify their piracy act over suspicions the oil was heading to Syria for the Syrian people to use to fuel their cars, generate power for their hospitals, schools, for heating during the coming winter and for baking their bread.

We Syrians have seen the ugliest nature of the falsely self-proclaimed civilization of the West and mainly from countries like the USA, Canada, Germany, France and the worst of them Britain.

Featured image is from Syria News