US Rubber-Stamp Court OKs Repeat Act of Piracy Against Iran 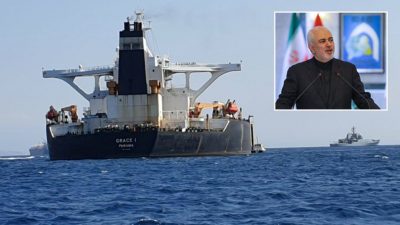 Time and again, hard evidence shows the US is a nation run by hawkish right-wing extremists, dismissive of the rule of law and democratic values they abhor and don’t tolerate.

Operating exclusively by their own rules, they maintain that UN Charter principles and other international law applies to other nations, not imperial USA.

All nations the US doesn’t control are on its target list for regime change, part of its longstanding plot to rule the world unchallenged, control its resources, and create ruler-serf societies everywhere — enforced by Pentagon-run NATO, operating as a global police force.

Since its 1979 revolution, ending a generation of US-installed fascist dictatorship, Iran has been a key target to transform back to US client state status — by brute force it that’s what it takes.

On July 4, on orders from the Trump regime, Britain unlawfully seized Iran’s Grace 1 super-tanker in international waters, a clear act of maritime piracy.

Despite pressure from Trump’s justice department, Gibraltar’s Supreme Court ordered the vessel released, letting it sail to its intended destination.

Trump regime hardliners consider the ruling unacceptable, temporarily foiling their plot to steal the vessel and its oil cargo, an action perhaps intended to provoke confrontation with Iran, clearly part of its “maximum pressure” agenda.

Following the Gibraltar court ruling, Trump’s State Department warned of “serious consequences for any individuals associated with the Grace I.”

On Friday, Trump’s justice department unsealed an anti-Iran warrant — in clear breach of international and US constitutional law, stating the following:

“A seizure warrant and forfeiture complaint were unsealed today in the US District Court for the District of Columbia alleging that Oil Tanker ‘Grace 1, all petroleum aboard it and $995,000.00 are subject to forfeiture based on violations of the International Emergency Economic Powers Act (IEEPA), bank fraud statute, and money laundering statute, as well as separately the terrorism forfeiture statute.”

All of the above claims are bald-faced Big Lies. Iran violated no laws, committed no bank fraud or money laundering, nor has it committed terrorist acts.

These rule of law breaches and countless more serious ones are specialties of the US, NATO, Israel, and their imperial partners in high crimes of war and against humanity.

It’s not how the nonbelligerent Islamic Republic operates, the region’s leading proponent of peace and stability, fully complying with international laws, norms and standards — what the US and its imperial partner breach daily.

US Policy Toward Iran Is All About Regime Change

Existing ones worldwide are made in the USA, invented to pursue its hostile to peace and stability imperial agenda.

Executive powers under the NEA have been largely invoked for political reasons, many related to sovereign independent states designated for regime change.

Clearly no national emergency exists for anything related to Iran. Trump regime hardliners invented one as part of their “maximum pressure” on the nation, its ruling authorities and people.

The justice department falsely accused Iran of “a scheme to unlawfully access the US financial system to support illicit shipments to Syria from Iran by the Islamic Revolutionary Guard Corps (IRGC), a designated foreign terrorist organization,” adding:

“The scheme involves multiple parties affiliated with the IRGC and furthered by the deceptive voyages of the Grace 1. A network of front companies allegedly laundered millions of dollars in support of such shipments.”

None of the above fabricated claims would hold up in a legitimate international tribunal.

Issuing the unjustifiable warrant is part of upping the stakes and escalating Middle East tensions more than already by anti-Iran Trump regime hardliners.

If Iran’s super-tanker, renamed the Adrian Darya, is seized by US warships in international waters or anywhere else in port or in transit, it’ll be another flagrant UN Convention for Law of the Sea (UNCLOS) breach — apparently what the White House intends.

“For the release of the Grace 1 oil tanker, Iran has made no commitment that the ship would not go to Syria because form the early hours of the tanker’s detention, we announced that Syria was not its destination and we have upheld the same,” adding:

“(I)t was nobody’s business even if it was Syria.” Iran is legally entitled to export oil and other products to any nations eager to buy them.

Unilaterally imposed US sanctions on the country and all others violate the UN Charter and other international law.

No nation may legally interfere in the internal affairs of others — what the US does repeatedly against virtually all other nations, seeking dominance over them.

Mousavi stressed that Iran “support(s) Syria in all areas, including oil and energy. This is legal and has nothing to do with any third country.”

All nations should support the Syrian Arab Republic’s struggle against US aggression, illegal occupation of its territory, terror-bombing of its infrastructure, and support for ISIS and other jihadists, used as imperial foot soldiers.

“Having failed to accomplish its objectives through its #EconomicTerrorism — including depriving cancer patients of medicine — the US attempted to abuse the legal system to steal our property on the high seas.”

“This piracy attempt is indicative of Trump admin’s contempt for the law.”

“The US, with its desperate, last-minute efforts, intended to prevent the release of the (Iranian) oil tanker from detention, and was faced with humiliation,” adding:

“The vessel will soon leave the Gibraltar region.”

It remains to be seen if Trump regime hardliners intend a high-seas showdown once the vessel sails.