Trump-Netanyahu: The Disgraceful President and the Contemptible Prime Minister

Much has been said and written about Trump’s disgraceful pointed “advice” to Prime Minister Netanyahu not to allow two duly elected Muslim Democrat congresswomen, Rashida Tlaib and Ilhan Omar, to enter Israel. Netanyahu, like a poodle, simply obeys his master’s command without as much as giving it a second thought, while ignoring the far-reaching implications of his egregious act. For whatever it’s worth, let me add my voice.

Here we have a president or a so-called one whose racism has long since been established.

Never missed an opportunity to demonstrate his loathing and disdain toward people of color—Hispanic, Black, and Muslim in particular.

His disgraceful behavior is always on display, as he engenders sick satisfaction from arousing hatred and division.

Though his enmity toward the Democrats is engrained to show this much disgrace goes beyond the pale of indignity and shame.

He has disgraced himself.

Disgraced the office of the Presidency.

Disgraced the House of Representatives.

Disgraced ordinary Americans and even many of his adherents.

Disgraced all decent Israelis who hold high their democracy.

Disgraced our allies who believe in sovereignty.

And it all comes down to a man who throws his weight around, to cover for his own weakness, frailty and brazen audacity.

Image on the right: Photo from November 2018 of then congresswomen-elect Rashida Tlaib (left) of Michigan, and Ilhan Omar of Minnesota. (Photo: Twitter/Rashida Tlaib) 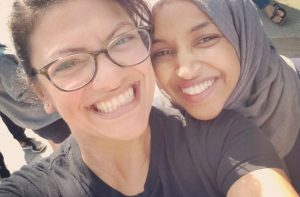 Netanyahu Is Destroying Both Israel and the Palestinians

Netanyahu would not have shown weakness by allowing Talib and Omar entry, but strength, dignity, and respect for the office they hold.

For the American Congress, whose unwavering backing of Israel stands unique in the annals of bilateral congressional support,

and stood fast by the country that shared their values.

A country that would have stood alone in adversity and existential threat.

But America—Democrats and Republicans alike, together never waver, hesitate, or vacillate, because Israel was not seen just an ally, but a partner.

A partnership that withstood the test of time.

A partnership that helped Israel to grow and prosper.

A partnership that made Israel safe and secure.

A partnership that has become a model for an inimitable relationship.

And here comes Netanyahu—a political animal, who would sell his mother (and deliver her) only to stay in power!

Now that he is running for his political life, he sees Trump as his savior.

Never mind that Trump does not really give a damn about Israel.

Never mind that Trump sees Netanyahu as a stooge to serve his sinister agenda.

Never mind that he set up Netanyahu against the Democrats.

Never mind that he broke all diplomatic protocols.

Never mind that he undermined Israel’s freedom to choose.

Never mind that he made Israel subservient to his whims.

But then, Netanyahu was not only happy but eager too to do Trump’s bidding.

This is how Netanyahu showed his contempt.

His contempt to what Israel stands for.

Contempt to the American Jewish community.

Contempt to the House of Representatives.

Contempt to political etiquette and culture.

Contempt to those with viewpoints that do not align with his.

Contempt to two Congresswomen who criticize Israel’s policy toward the Palestinians.

Contempt to people of color.

Contempt to the office of the Prime Minister.

This is the Netanyahu that has lost any sense of common decency.

For nothing matters to him, no country, no party and no civility.

Netanyahu and Trump are made of the same cloth Narcissists, self-absorbed, egomaniac, xenophobic, and yes, with insatiable lust for ever more power while selling their countries down the river.

Netanyahu has lost an invaluable opportunity to show hospitality—and welcome the two Congresswomen.

To listen to their grievances and concerns.

To explain the nature of the conflict with the Palestinians.

To elucidate why Israel opposes the BDS movement.

To demonstrate what Israel is all about.

To suggest how the Israelis and the Palestinians can live in peace and harmony.

To invite them to be a part of a process of reconciliation.

To become emissaries of peace and amity.

But then, this is not what Netanyahu stands for or believes in.

He is a nationalist who stains Israel’s reputation.

He is a racist and a bigot who has long since lost his bearings.

He is destroying Israel’s democracy brick-by-brick.

He is a criminal and soon to be tried for abuse of power and breach of trust.

He betrayed his countrymen, betrayed the state.

Betrayed the American Jewish community, while succumbing to the whims of a would-be a dictator.

And with deep sorrow, the once-cherished US-Israel relationship may never be the same.

Because these two wicked men have adopted disgrace and contempt that deservedly bonded them together.