For two months, Palestinian refugees in Lebanon have been in rebellion against new labor laws discriminating against them and against Syrian refugees. Already denied more than 70 jobs, in order to work in Lebanon Palestinians must now apply for costly work permits and pay into social security for services they are denied. They also face workplace raids targeting refugees.  The Palestinian uprising has received scant coverage in the western media.  Receiving even less coverage  is the growing solidarity between Lebanese  and Palestinians in the refugee camps.  To shed light on the situation, Liberation News interviewed Jana Nakhal, a member of the Central Committee of the Lebanese Communist Party, who is active in organizing against anti-refugee policies. Steps are underway, she says, to organize a new Lebanese-Palestinian alliance.

Liberation News: I understand that the rightwing Lebanese Forces is behind these new restrictions on Palestinian and Syrian refugees.

Jana Nakhal: Yes, the Labor Minister Kamil Abu Sleiman is a big businessman from the Lebanese Forces, and he is the one behind these restrictions and raids. The Lebanese labor law has special amendments which were agreed upon in 2010 in order for the Palestinian refugees to have better access to jobs. The amendments weren’t implemented. The minister doesn’t want to implement them and want to “apply the law.”

LN: Why these laws now?  What do other parties in the government think of this?

JN: There are internal and external reasons. Internally, the system is trying to save itself. The Lebanese economy is at the edge of bankruptcy. All sectors are crippled, the state is becoming increasingly violent because they can’t hide the numbers signaling the imminent bankruptcy.

‘The street is boiling’

There have been demonstrations in Palestinian camps, demonstrations organized by Lebanese in support of the rights of foreign workers, refugees, the queer community and non-believers.

Mashrou’ Layla is a local band which is very vocal in supporting queer rights. On Aug, 9  they had a concert in the city of Byblos. The right wing, led by the Maronite church in an ISIS-like attack, launched a campaign against them and forced them to cancel the concert due to a song which mentions “in the name of the father, the son.” 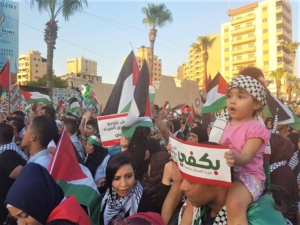 Queer groups, atheists, secularists, leftists, communists, and other led a campaign in support of the band. The result was a free concert in Beirut in support of queer rights, religious views, refugees, etc. For the first time in Lebanon, we witnessed banners supporting the rights of Palestinian refugees along with queer and trans flags. I think this is also the first time this has happened in Arab country.

There have been demonstrations for employee’s rights, because the state wants to steal their pensions, environmental demonstrations have taken place all across the country. There are strikes and demonstrations at the public university as well as at the American university, which wants to force its students to pay their tuition in U.S. dollars. “The street is boiling,” as we say here.

The state can’t hide anymore. Its old alibi of setting sectarian\religious groups against one another by blaming one sect for being rich in order to create tensions with other sects is not working anymore, because almost everyone can see that poverty has hit people from all sects.

This means that capitalists need to find another narrative, a new scapegoat: the refugees. They are blamed for everything, from electricity cuts, which have never stopped since the 1975-90 Civil War, to unemployment. All political parties in Lebanon are supporting this discourse except the Lebanese Communist Party. They are all part of the system.

Externally, there is the infamous “Trump’s Deal of the Century.” This has resulted in  Palestinian refugees being pushed out of Palestine and then out of the region in an attempt to take away from them any connection to their land. Not only that, like any imperialist endeavor, this project aims at cutting the Palestinian people’s ties with the land, history, and  to the conception of resistance. This project  is betting that alienating the Palestinian people from the idea of Palestine, both physically\spatially and conceptually, will be the way to totally dismiss the right of return.

LN: Could you describe the uprising now taking place in the Palestinian camps?

JN: The Palestinian camps have a beautiful uprising. It has earned the name of “The Palestinian Popular Movement,” or simply “The Movement.” For six weeks now, Palestinians from all backgrounds and factions in all camps have organized outside their corrupt factions, going on strikes, demonstrations and developing a very well-informed discourse which demonstrates the high level of political awareness in the camps, despite the lack of political activities for a long time now.

But the problem is that the media has not been covering The Movement.

The Lebanese voice which refuses racism

So Palestinians called upon the Lebanese to demonstrate and raise a voice against the only Lebanese voice now heard, which is co-opting the media. They asked us to be the Lebanese voice which refuses racism and the labor minister’s project. So we started organizing, using our privilege for once, showing that this discourse doesn’t represent us. Opposition from inside the system is, as we all know, very efficient.

Friday, Aug. 9 was our second action. It was organized in collaboration with the Palestinian movement which was leading three demos at the same time in the three camps of Beirut, Mar Elias Camp, Shatila Camp and Burj Barajneh Camp.

We started our demonstration outside the camp in Badaro, walked all the way to the Shatila Camp to meet the demonstrators there. The meeting was a very emotional moment. The whole camp was in the streets, people chanting together and welcoming us with tears, organizers crying from both sides, because they weren’t feeling alone anymore. Solidarity is empowering, it makes us feel less powerless and small in the face of the system.

For the first time in Lebanon, and possibly in any Arab country, banners supporting the rights of Palestinian refugees were carried along with queer and trans flags. The banner reads: Full civil, economic, social rights for Palestinian refugees. Photo: Jana Nakhal, Facebook.

LN:What do the Lebanese people think of these laws restricting Palestinian and other refugees?

JN: There are diverse views concerning these laws. The media is covering only one view, so we are showing that there is more.

The Palestinian and leftist social media pages have been sharing very emotional pictures and videos of these demos, because the mainstream media isn’t. I have already mentioned the on-going solidarity movement created. The Lebanese Communist Party is participating in it along with independent individuals, feminists, leftists, etc.

‘The country has space for everyone’

LN: Is there an analogy with anti-ICE protests here in the U.S.?

JN:  There definitely is an analogy. It is the same right wing wave hitting states everywhere. The Lebanese right wing, always eager to mimic their western lords, is only “Lebanon-izing” the discourse.

This article was originally published on Liberation News.

Joyce Chediac presented her report  at the New York Commission hearing of the Commission of Inquiry for the International War Crimes Tribunal, May 11, 1991. It is reprinted from War Crimes: A Report on United States War Crimes Against Iraq, Maisonneuve Press, 1992.