The Afghanistan government has been miffed and apprehensive for some time that the Trump administration has been talking to the Taliban in Qatar without any representation from Kabul. Government officials were therefore happy about Trump’s abrupt cancellation of what he depicted as a summit with the Taliban at Camp David (to which Afghanistan president Ashraf Ghani was not invited). Trump cancelled on the grounds that the Taliban killed a US serviceman on the eve of the talks.

According to Hasht-i Subh, Abdullah Abdullah, the chief executive of the Islamic Republic of Afghanistan, remarked,

“We were looking at the possibility of a joint meeting in Camp David as an opportunity, but unfortunately the peace efforts being conducted against the will and the aspirations of the Afghan people were sabotaged by increased violence and terror attacks by the Taliban and other elements.”

He actually said the talks were conducted against the will of the Afghan people.

There is no indication Trump was going to invite the Kabul government alongside the Taliban.

that they “consider the Taliban’s current war and violence against Afghans as the main obstacle to the ongoing peace process” and that “real peace would come only when the Taliban stop killing Afghan people, accept a ceasefire and start face-to-face talks with the Afghan government”.

The draft agreement between the US and the Taliban negotiated by former US ambassador in Kabul Zalmay Khalilzad over the past year pledges that 5,400 US troops would be withdrawn from the country within 4 months of its finalization.The Taliban refused to have president Ashraf Ghani involved, calling him an American puppet.

All this reminds me of the Nixon-Kissinger Paris Agreement with North Vietnam in 1972, which was billed as a peace accord but really consisted of articles of surrender. The US rapidly withdrew its 500,000 troops and by 1975 Saigon had fallen.

Trump seems to be doing what Nixon did, and I suspect the results would be similar. Gerald Ford took the fall for the defeat in Vietnam, and it may have helped Jimmy Carter win the presidency.

The US has long since lost the Afghanistan War. As of the beginning of this year Rod Nordland at the NYT reported, the Kabul government of president Ashraf Ghani only surely controlled about 54% of the country’s 407 districts and has been steadily losing those districts each quarter. The Taliban insurgency only itself surely controlled 12 percent of these districts. The other 34% were contested.

The Taliban have made further advances this year, even this month. The Dari press reported that just two days ago the Taliban seized Anar Dara district of Afghanistan’s western Farah province, as the Afghanistan National Army (ANA) “withdrew,” after a Taliban bomb killed the district’s police chief’s wife and daughters.

On August 30, The Taliban took the center of Chah Ab district of Afghanistan’s northern Takhar province, according to BBC Monitoring.

On August 28, Pajhwok said that the Taliban overran the center of Qarghan district of northwestern Faryab province.

Somehow I get the idea that the Taliban have more now than the 12% they had in fall of 2018.

In fact this recent map from the Long War Journal gives them about 16%:

FDD?s Long War Journal Taliban Control of Terrain map displays an assessment of districts controlled and contested by the Taliban.

These advances come despite the US bombing runs on the Taliban and the help given the ANA by the 14,000 US troops in country.

Not to mention, the campaign of bombing by the Taliban in Kabul and elsewhere. Here’s a map of violent incidents in the country so far this year:

President Trump has cancelled peace talks between the Taliban and US/government forces, citing insecurity and the Taliban’s recent attack in Kabul which killed a US soldier.
– Map shows incidents in #Afghanistan recorded in 2019 to date. (1/2)@IntellFusion 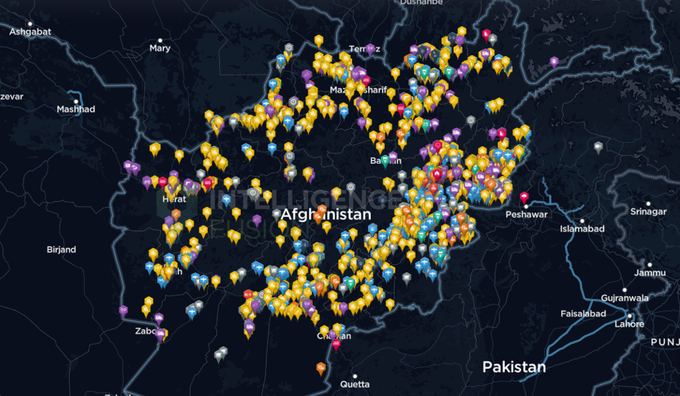 15 people are talking about this

Not to mention that they have launched yet another campaign to take Kunduz in the north of the country (the Taliban are a southern and eastern, Pushtun force). Only about a third of Kunduz province is even Pushtun, and if the Kabul government can’t hold it, there is something very wrong with its military.

You can only have meaningful peace talks with an insurgency if they think they are losing and want to win through talks at least some concessions before they go down completely.

The Taliban don’t think they are losing, because they are not. Objectively speaking, they are taking district after district, increasing the territory they control by 4% in just the past year.

Trump-Taliban is just for show, like Trump-North Korea. It is like a photo op on the deck of the Titanic as it headed to sea.

Featured image is from Moscow Times