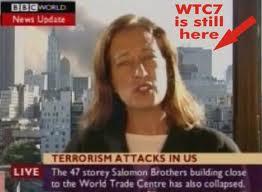 This article was first posted on Global Research in March 2015

A class action law suit against the BBC should be contemplated?

The BBC had foreknowledge of a criminal act and failed to inform the public. ( M. Ch. GR Editor)

Horsham, UK, 2013 – Tony Rooke, in an act of civil disobedience, refused to pay the mandatory £130 TV license fee claiming it violates Section 15 of the Terrorism Act. Rooke’s accusation was aimed at the BBC who reported the collapse of WTC 7 over 20 minutes before it actually fell, and the judge accepted Rooke’s argument. While it was not a public inquiry into 9/11, the recognition of the BBC’s actions on September 11th are considered a small victory, one that was never reported in the US.

“Today was an historic day for the 9/11 truth movement,” Peter Drew of AE911Truth UK told Digital Journal, “with over 100 members of the public attending, including numerous journalists from around the UK as well as from across other parts of Europe.”

Under Section 363 of the Communications Act, citizens of the UK are required to purchase an annual license in order to use a television receiver. Rooke refused to pay the license fee due to a section of the Terrorism Act that states:It is an offence for someone to invite another to provide money, intending that it should be used, or having reasonable cause to suspect that it may be used, for terrorism purposes.

The fact that the BBC reported the collapse of WTC 7 twenty-three minutes before it actually fell indicates that the UK was aware of the attacks on 9/11 before they actually happened. The direct implication is that they were working with the “terrorists”, all arguments as to who the terrorists actually were aside.

Here is a broadcast of the BBC’s announcement that WTC 7 (Salomon Brothers Building) collapsed when it was still standing behind the reporter:

Rooke had been given a six-month conditional discharge and told to pay £200 after admitting that he owned a television and watched it without a license. He represented himself at Horsham Magistrates’ Court in West Sussex.

“Mr. Rooke puts the basis of his defence under Section 15 of the Terrorism Act, effectively asking the court to find the BBC  a terrorist organisation and that if he continues to pay them he himself is committing a criminal offence.” – District Judge Stephen Nicholls

In Rooke’s statement to the court:

“I believe the BBC, who are directly funded by the licence fee, are furthering the purposes of terrorism and I have incontrovertible evidence to this effect. I do not use this word lightly given where I am.”

Although he was not allowed to show his video evidence in court due to the District Judge deeming it irrelevant to the trial, the fact that the BBC reported WTC 7’s collapse over 20 minutes beforehand proved to be evidence enough.

He also made reference to the theories behind the collapse of WTC 7 being a controlled demolition, as the evidence suggests. In an additional statement:

“The BBC reported it 20 minutes before it fell. They knew about it beforehand. Last time I was here I asked you (the judge): ‘Were you aware of World Trade Centre 7?’ You said you had heard of it. Ten years later you should have more than heard of it. It’s the BBC’s job to inform the public. Especially of miracles of science and when laws of physics become suspended.

“They have made programmes making fools of and ridiculing those of us who believe in the laws of gravity. American reports have shown that the fall was nothing but a controlled demolition.

“I am not looking at who demolished it—that is impossible—but the BBC actively tried to hide this from the public.”

In response from Judge Nicholls:

“Even if I accept the evidence you say, this court has no power to create a defence in the manner which you put forward.”

In light of the evidence the judge took into consideration, Rooke was given an unconditional discharge, which in British legal parlance means he “was convicted but he does not suffer the consequences of a conviction, and the conviction will be erased if he is not brought before the court for six months.” He was not required to pay the fee and non-payment fine either—only court costs of £200.

Copyright We are Anonymous, 2015

The original source of this article is We Are Anonymous
Copyright © Global Research News, We Are Anonymous, 2019
https://www.globalresearch.ca/bbc-foreknowledge-of-911-collapse-of-wtc-building-seven-british-man-won-law-suit-against-bbc-for-911-cover-up/5438161