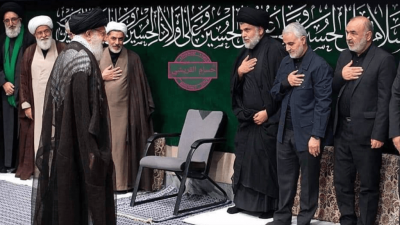 The leader of the Iranian revolution Sayyed Ali Khamenei received on the 10th of Moharram, the Iraqi leader Sayyed Moqtada al-Sadr, brought to him by Brigadier General Qassem Soleimani, head of the Iranian Revolutionary Guard Corps – Quds Brigade (IRGC-QB) and in presence of the IRGC commander Hossein Salame. The visit- and above all the pictures taken with Al-Sadr and the Iranian leader along with Soleimani and Salame – is a message Iran is sending to Saudi Arabia- who published in July 2017 a photo uniting al-Sadr with Saudi Crown Price Mohammad Bin Salman. The Sadr-Bin Salman meeting was meant to be received in Iran and among the “Axis of the Resistance” as a Saudi breakthrough in Iran’s backyard, and a capture of one of – what Saudi Arabia may believe – the pillars of this “Axis” in Iraq. Moqtada, albeit unwillingly, was giving signals to those unfamiliar with his “political style”, as a “new” alignment of al-Sadr, a move away from Iran and closer to Saudi Arabia. While Tehran is sending the ball back to the Saudis’ court, al-Sadr himself has a history of unpredictable behaviour and inconsistent political alignment. He has criticised Iran in many circumstances without being necessarily pro Saudi. What is the real position of Moqtada and why this “political jumping” from one extreme to the other?

It is all related to the history of Iran in Iraq just after the US occupation of the country, and in particular its approach to al-Sadr and his group since 2003. Moqtada al-Sadr expressed at that time his rejection of the US occupation. Iran found Moqtada very attractive to support. He is a Shia cleric, a Sayyed (descendent of the prophet), and a member of the well-known and respectful al-Sadr family with roots in Iran, Iraq and Lebanon. Also, Moqtada enjoys the support of hundreds of thousands of followers he inherited from his father Sayyed Mohammad Sadeq, particularly among the southern Iraqi poor and in al-Sadr city in Baghdad.

By occupying Iraq in 2003, Tehran feared the US would turn its guns against its allies in Syria and Lebanon and end up attacking Iran once it had consolidated its presence in Mesopotamia. It was necessary to defeat the US forces in Iraq and stop their expansion plan or at least force their departure. Iran supported the Iraqi resistance against the occupation forces and transferred its experience and finance to those wishing to end the US control of Iraq.

Not that Moqtada has changed much since 2003 – Moqtada was very young and inexperienced, and over a decade later, his way to run his political aspirations is still amateurish. In 2004 he took control of Najaf and spread checkpoints throughout the city, including al-Rasoul street leading to the house of Sayyed Ali Sistani and to Imam Ali’s Shrine. I, as a foreigner walking down the street, was stopped once by his armed teenage militants and was only released by the Islamic Court, to which I was conducted by Sayyed Hashem Abu Rgheef.

Iran reached the peak of its support to Moqtada’s army (Jaish al-Mahdi) when he confronted the US forces in Najaf in August 2004. It continued to do so when Moqtada agreed to form a new group under the name of Asaeb Ahl al-Haq and gave the command to his assistant Sheikh Qais al-Khaz’ali. The group was trained and financed by Iran through Abu Mahdi al-Muhandes, the actual vice head of the “Popular Mobilisation Forces” (PMF). The Asaeb group was responsible for several successful attacks against the US and British forces until 2008, a year after the arrest of Sheikh Qais al-Khaz’ali in Basra.

In 2006, Moqtada al-Sadr moved to Iran for several years for fear of being assassinated by the US. Nevertheless, he was considered an uneasy guest by the Iranian officials. The IRGC-Quds Brigade commander Soleimani didn’t know what to do with him, nor how to “bring some reason” to Moqtada. While in Iran, Moqtada planned to visit Prince Bandar Bin Sultan at a time when the Saudi Prince was Head of Intelligence Services, and the relationships between Iran and Saudi Arabia were far from being cordial.

In 2008, Iran encouraged the separation between the Asaeb Ahal al-Haq and Moqtada. It gave Sheikh Qais al-Khaz’ali full support to go solo with Asaeb. Iran organised a new, separate group under the leadership of Sheikh Aqram called “Harakat al Nujabaa”. It also supported the ex-head of Jaish al-Mahdi, Abu Mohammad Shibl al-Zaidi in forming his own group, Kataeb Imam Ali.

The Sadrist leader was and still is a rebel, unpredictable in his political choices and moves. But Moqtada is also very angry with Iran, accusing Soleimani of being responsible for the many splits in his organisation. He takes every opportunity to attack Iran. But Soleimani himself is clever enough to “contain” Moqtada and bring him closer, notwithstanding the Sadrist political attitude and choices. Indeed, Soleimani organised this week a “casual meeting” at “Imam Khomeini’s Husseyniyat” in Tehran, between Moqtada and Sayyed Ali Khamenei during the exceptional day for the Shia, who commemorate around the world the third Shiite Imam Hussein Ibn Ali’s killing, along with many members of his family and followers in Karbalaa, Iraq.

It is Iran’s way to send messages across the Middle East. For some time, Moqtada was believed to be totally anti-Iran, raising hopes for Gulf countries to have on their side a Shia cleric with 54 seats in the Parliament. These countries’ leaders missed out that Iraq is Iran’s backyard and that Soleimani well knows how to play his cards.

Although Moqtada’s political bloc, Sa’iroun, has more than any other political group – they won 54 seats in Iraq’s 329-member parliament – he failed to deliver his promises of reforms, technocratic leadership, and the anti-corruption agenda. It will surprise many of his own circle if he gathers a third of the seats he controls today in the forthcoming election. Moqtada’s group is today the image of their leader: spread thin and with no clear reference and direction.