The Post 9/11 Era and The “Global War on Terrorism”: “You are Either with Us, or with the Terrorists” 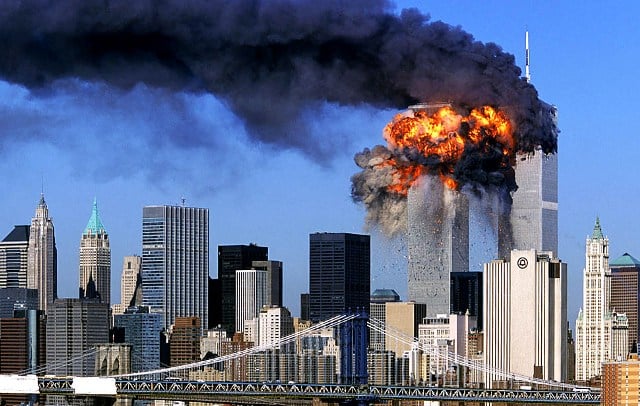 The tragic events of September 11, 2001 constitute a fundamental landmark in American history. a decisive watershed, a breaking point. Millions of people have been misled regarding the causes and consequences of 9/11.

September 11 2001 opens up an era of crisis, upheaval and militarization of American society.

A far-reaching overhaul of US military doctrine was launched in the wake of 9/11.

Endless wars of aggression under the humanitarian cloak of “counter-terrorism” were set in motion.

September 11, 2001 marks the onslaught of the “Global War on Terrorism” (GWOT), used as a pretext and a justification by the US and its NATO allies to carry out a “war without borders”, a global war of conquest.

The transcript of this interview will be published shortly

At eleven o’clock, on the morning of September 11, the Bush administration had already announced that Al Qaeda was responsible for the attacks on the World Trade Center (WTC) and the Pentagon. This assertion was made prior to the conduct of an indepth police investigation.

CIA Director George Tenet stated that same morning that Osama bin Laden had the capacity to plan  “multiple attacks with little or no warning.”

That same evening at 9:30 pm, a “War Cabinet” was formed integrated by a select number of top intelligence and military advisors. And at 11:00 pm, at the end of that historic meeting at the White House, the “War on Terrorism” was officially launched.

Amply documented but rarely mentioned by the mainstream media, Al Qaeda is a creation of the CIA going back to the Soviet- Afghan war. This was a known fact, corroborated by numerous sources including official documents of the US Congress, which the mainstream media chose to either dismiss or ignore. The intelligence community had time and again acknowledged that they had indeed supported Osama bin Laden, but that in the wake of the Cold War: “he turned against us”.

Is there any proof to the effect that Osama bin Laden, the bogeyman, coordinated the 9/11 attacks as claimed in the official 9/11 narrative?

According to CBS news (Dan Rather, January 28, 2002), “Enemy Number One” was admitted to the urology ward of a Pakistani military hospital in Rawalpindi on September 10, 2001, courtesy of America’s indefectible ally Pakistan. He could have been arrested at short notice which would have “saved us a lot of trouble”, but then we would not have had an Osama Legend, which has fed the news chain as well as presidential speeches in the course of the last 18 years.

1. Osama bin Laden could not reasonably have coordinated the 9/11 attacks from his hospital bed;

2. The hospital was under the jurisdiction of the Pakistani Armed Forces, which has close links to the Pentagon. Osama bin Laden’s whereabouts were known to both the Pakistani and US military.

U.S. military and intelligence advisers based in Rawalpindi. were working closely with their Pakistani counterparts. Again, no attempt was made to arrest America’s best known fugitive. Defense Secretary Donald Rumsfeld claimed, at the time, that the whereabouts of Osama bin Laden were unknown. According to Rumsfeld:  “Its like looking for a needle in a stack of hay”.

The immediate response of the US and its allies to the 9/11 attacks was to the declare a war of retribution against Afghanistan on the grounds that the Taliban government was protecting “terror mastermind” Osama bin Laden. By allegedly harboring bin Laden, the Taliban were complicit, according to both the US administration and NATO, for having waged an act of war against the United States.

Parroting official statements, the Western media mantra on September 12, 2001 had already approved the launching of “punitive actions” directed against civilian targets in Afghanistan. In the words of William Saffire writing in the New York Times: “When we reasonably determine our attackers’ bases and camps, we must pulverize them — minimizing but accepting the risk of collateral damage” — and act overtly or covertly to destabilize terror’s national hosts”.

This decision was taken by the Bush-Cheney war cabinet in the evening of September 11, 2001. It was based on the presumption, “confirmed” by the head of the CIA that Al Qaeda was behind the attacks.

On the following morning, September 12, 2001, NATO’s Atlantic Council meeting in Brussels, endorsed the Bush administration’s declaration of war on Afghanistan, invoking Article 5 of the Washington Treaty.

Meanwhile, on two occasions in the course of September 2001, the Afghan government –through diplomatic channels– offered to hand over Osama Bin laden to US Justice. These overtures were turned down by president Bush, on the grounds that America “does not negotiate with terrorists”.

The war on Afghanistan was launched 26 days later on the morning of October 7, 2001. The timing of this war begs the question: how long does it take to plan and implement a major theater war several thousand miles away. Military analysts will confirm that a major theater war takes months and months, up to a year or more of advanced preparations. The war on Afghanistan was already in the advanced planning stages prior to September 11, 2001, which begs the question of foreknowledge of the 9/11 attacks.

The repeal of civil liberties in America was launched in parallel with the bombing and invasion of Afghanistan, almost immediately following 9/11 with the adoption of the PATRIOT legislation and the setting up of a Homeland Security apparatus, under the pretext of protecting Americans. This post-911 legal and institutional framework had been carefully crafted prior to the 9/11 attacks.

Al Qaeda is a US Intelligence Asset

Important to the understanding of 9/11, US intelligence is the unspoken architect of “Islamic terrorism” going back to the heyday of the Soviet-Afghan war.

Bin Laden was 22 years old and was trained in a CIA sponsored guerrilla training camp. Education in Afghanistan in the years preceding the Soviet-Afghan war was largely secular. With religious textbooks produced in Nebraska, the number of CIA sponsored religious schools (madrasahs) increased from 2,500 in 1980 to over 39,000.

THE 9/11 READER. The September 11, 2001 Terror Attacks
The original source of this article is Guns and Butter
Copyright © Prof Michel Chossudovsky and Bonnie Faulkner, Guns and Butter , 2019
https://www.globalresearch.ca/the-post-911-era-and-the-global-war-on-terrorism-you-are-either-with-us-or-with-terrorists/5689769