Israel in limbo: ‘Kingmaker’ Lieberman refuses to endorse Netanyahu or Gantz for PM

FILE PHOTO. Benny Gantz (L) and Benjamin Netanyahu (C) are pictured together. © Reuters / Baz Ratner
Uncertainty is growing in Israel after the indecisive parliamentary election, as Avigdor Lieberman, who leads a party which has a key position in forming a coalition, refused to endorse either leading candidate for PM.

Two-day consultations between Israeli President Reuven Rivlin and leaders of political parties kicked off on Sunday. The president will have to decide who he entrusts with the mandate to form a ruling coalition.

Still, the two leaders of the Knesset election, incumbent PM Benjamin Netanyahu and head of the Blue and White alliance Benny Gantz, do not have a clear path to achieve a majority. Their parties scored 31 and 33 seats respectively, which falls far below the required 61-seat majority – and Gantz has already rebuffed Netanyahu’s calls for a “unity government.” 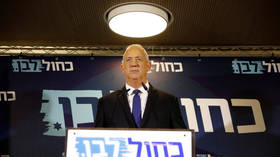 Bibi’s out? Gantz refuses to meet with Netanyahu, says he will form unity govt without embattled PM

The prospects for securing a majority became even shakier after ex-Defense Minister Avigdor Lieberman said that his party – which secured 8 seats in the 120-seat Knesset – won’t endorse both Netanyahu and Rivlin over their choice of allies for the parliamentary coalition.

“The commitments we’ve made to our voters are rock solid, and we won’t budge at all,” Lieberman said. “As soon as Benjamin Netanyahu and Likud decided to form a bloc with ultra-Orthodox parties and religious fanatics, we can’t be part of that bloc.”

Lieberman’s position on Gantz is even tougher as h blasted the potential coalition between the Blue and White and the Arab-dominated Joint List alliances, branding them as outright “enemies.”

The Arab-dominated alliance, which secured 13 seats in the Knesset, announced its support for Gantz later in the day. It remains unclear if it will actually enter into a coalition with him, but even if it does, Gantz would only have 57 seats in parliament, which is still short of a majority. Significantly more Arabs went to the polls in these elections after Netanyahu promised to annex parts of the West Bank and installed cameras in voting stations in Arab neighborhoods.

Netanyahu, on the other hand, appears to have 55, and therefore he will likely not receive the mandate to form a government. There might be a catch, however, as Israeli media have reported that Bibi’s Likud is considering not endorsing anyone for PM. This would ensure that Gantz has a solid lead – in hopes that he ultimately fails to form a government, making it easier for Bibi to make a second attempt.

ALSO ON RT.COMThe retired general who took down Bibi: Who is Benny Gantz?The ongoing limbo – as well as the Likud’s quite modest score at the elections – are largely a result of Netanyahu’s own campaigning style, political commentator Neil Lazarus believes. Antagonizing his political opponents, rallying his supporters against the Israeli Arabs – and insulting the latter with the decision to place cameras at polling stations in Arab-populated areas – have backfired on him.

“In the last days ahead of the elections we saw Netanyahu trying to attract his home base. We’ve seen that before, when he says the Arabs are coming out, the left are coming out, he blames the press and so on,” Lazarus told RT.

The protest vote has apparently targeted the incumbent PM personally, not his policies, since the program of the Blue and White bloc looks quite the same to the Likud’s. At the same time, one of the major Netanyahu’s campaign promises – annexation of the West Bank – is unlikely to happen if he fails to secure the PM post, Lazarus believes.

The president’s attempts to have both Netanyahu and Gantz to form the government look like a next to impossible feat, he also noted.

The president’s attempts to have both Netanyahu and Gantz to form the government look like a next to impossible feat, he also noted.