Media Disinformation and the Houthis

There is another twist in the Iran vs. Saudi Arabia narrative, according to the Wall Street Journal.

Exclusive at @WSJ: Are Houthi fighters in Yemen breaking ranks with Iran? After claiming to have carried out strike on Saudi that US officials say was launched from Iran, Houthis tell diplomats another strike may be coming. And not from them. https://www.wsj.com/articles/yemeni-rebels-warn-iran-plans-another-strike-soon-11569105344 …

Houthi militants in Yemen have warned foreign diplomats that Iran is preparing a follow-up strike to the missile and drone attack that crippled Saudi Arabia’s oil industry a week ago, people familiar…

43 people are talking about this

The Houthis were never particularly close to the mullahs in Iran, a fact admitted by none other than Foreign Policy, an establishment magazine and website once owned by the Carnegie Endowment for International Peace (sic), and later the crown jewel of the CIA’s Operation Mockingbird, The Washington Post. The website is run by Democrat “humanitarian interventionists,” so a differing with the neocons is to be expected.

Until now, and apart from Tehran’s strong pro-Houthi rhetoric, very little hard evidence has turned up of Iranian support to the Houthis. There has been evidence of some small arms shipments and, likely, military advice from Hezbollah and Revolutionary Guard officers, who may have helped the Houthis in firing missiles into Saudi territory and targeting Saudi vessels in the Red Sea. Meanwhile, U.S. and British military and intelligence support to the Saudi-led coalition exceeds by many factors any amount of support the Houthis have received from Tehran.

The War Street Journal story seems to have an attribution issue. However, that’s not a problem for the neocons. They’re accustomed to telling lies and inventing fabrications prior to attacking their enemies, which are Israel’s enemies. The WSJ did its part, along with WaPo and NYT, to demonize Saddam Hussein, provide cover for the invasion of his country, and have him hanged. Ditto Muammar Gaddafi sodomized with a bayonet.

confused why ‘Iranian-backed Houthis’ are itching for a US strike against Iran.

source is only identified as “people familiar with the matter” and “these people”. Not actually Houthis, whose spokesman said they hadn’t delivered any such warning. https://apple.news/A01zREjC0RvCUhZ8P_GObnw … 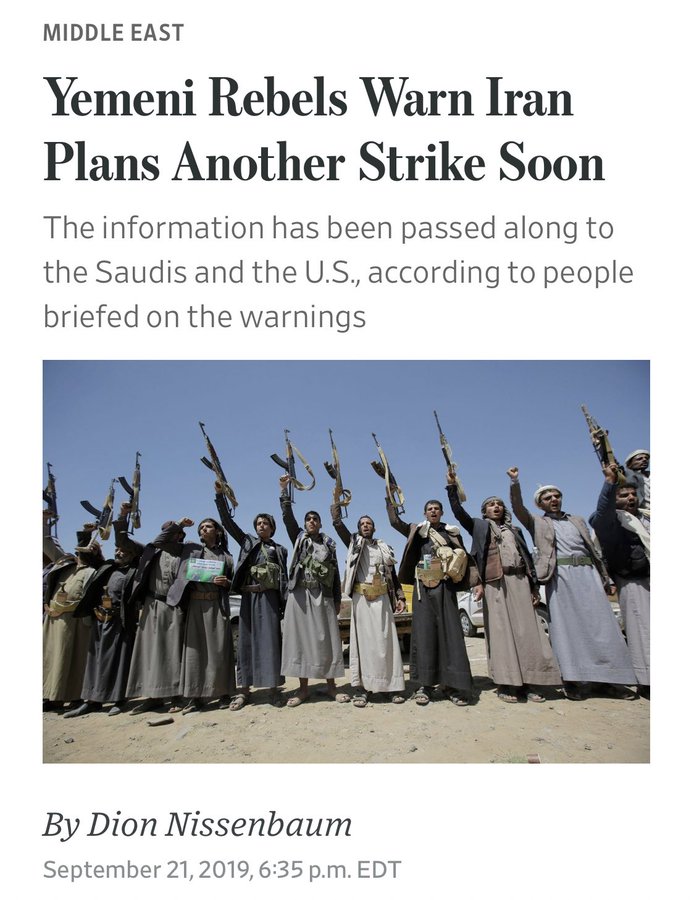 78 people are talking about this

On Sunday, Mike Pompeo—Trump’s intrepid anti-Iran fanatic, “malignant manatee,” and secretary of state—took to Fox News to talk about the report. 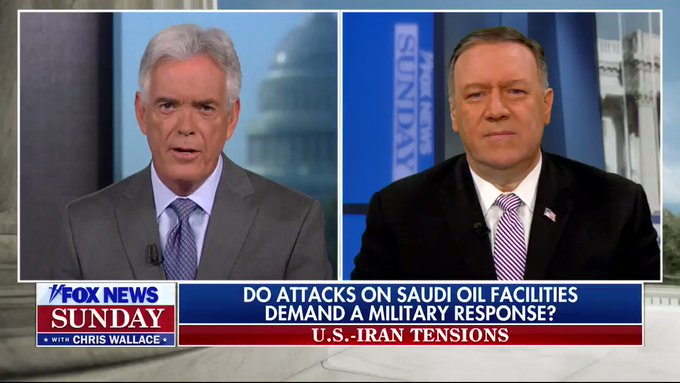 30 people are talking about this

#Pompeo says the #Saudi oil attack was an act of war by #Iran. He added that even if the #Houthis carried out the attack, Iran is still guilty because they supplied the weapons. By that logic, the USA is guilty of GENOCIDE against #Yemen for supplying the weapons to the Saudis.

73 people are talking about this

But then these guys just can’t help it, they’re serial liars and deceivers.

So many problems in this article. Houthis took credit for 1st attack, why would they now claim Iran is planning *follow up* attack? Either Houthis lied the 1st time or are lying now or these US sources who are not attributed in anyway just made this up for a gullible US press.

21 people are talking about this

I would argue the corporate media is not gullible—it is complicit in war crimes.

Meanwhile, Pompeo—who admitted earlier this year he is a liar, cheater, and thief—is working closely with the medieval Wahhabi kingdoms and Princeling Mohammed Bone Saw to figure out a way to get a war going even as Trump stands on the brakes, fearing an election loss.

Finally, the war propaganda is becoming seriously bizarre. Here we have “Stop Extremism,” a group that is active on Twitter and Facebook, basically claiming the Houthis are responsible for the evolving humanitarian crisis in Yemen.

Heartbreaking stories of more than 3 million #children starving to death as a result of the civil war by #Iran-backed Houthis militias.

More than 8 million children are on the edge of the abyss due to hunger and disease.

32 people are talking about this