The United Nations as an “Instrument of War”: The Russia-China Veto Has Protected Syria from Obliteration. What Comes Next?

In December, 1990, the UN Security Council adopted Resolution 678, which “authorized” the devastating saturation bombing of Iraq (at one point the UK dropped one bomb per minute on Baghdad, according to the NY Times), which “destroyed the infrastructure necessary to support human life in Iraq,” and, as described by former US Attorney General Ramsey Clark, who visited Iraq following the UN authorized massacre of Iraqis, left the formerly developed country in such horrific ruins that hospitals had no electricity and surgeons operated by candlelight;  Clark witnessed a 17 year old girl whose leg was so mangled by the bombings that it had to be amputated without anaesthesia, which was no longer available as a result of the bombings.

Though war was abhorrent to Malaysia and Columbia, their acquiescence to the War Resolution 678 was obtained by coercion of their Foreign Ministers by US Secretary of State James Baker; the Soviet Union was on the verge of collapse, and lacked the strength to veto the resolution, and China was not yet the world power it became in the next 25 years.  Formerly stable Iraq has become destitute, and the incubator of terrorism.

In March, 2011, the UN Security Council adopted Resolution 1973 “authorizing” the bombing of Libya, and under Medvedev, the Russian Federation abstained in the voting, and the Resolution passed.  Though Russia claimed it did not anticipate the complete destruction of the Libyan state, which became destitute, and another incubator of terrorism, it is difficult to believe that Russia was so naïve.  China also abstained, allowing the abhorrent resolution to pass. Libya’s leader of a previously fully functioning state, Omar Khadafy, was captured, tortured to death, sodomized with a bayonet

With these “successes” in transforming the UN into an instrument of war, in complete betrayal of President Franklin Delano Roosevelt’s purpose in founding the UN, and with the West’s success in “legitimizing” the destruction of oil producing states, leaving them barren of protection of their national resources, and ripe for plunder of their natural patrimony, barely four months had passed when suddenly the condition of “human rights” in Syria became the obsession of the UN Security Council, and President Assad was demonized, as formerly Saddam Hussein and Khadafi had been prior to UN “authorized” slaughter.  Once again, the West tried to force another Chapter VII War Resolution through the Security Council, but this time, Russia no longer pretended ignorance of the horrors such a resolution would inflict,  China had seen enough of this now predictable abuse of the Security Council, and during ensuing years through 2013, each time the West tried to force through another war resolution both Russia and China vetoed this, three times in succession, and it became clear that the game was over.  Though Russia and China were, of course, blamed for the Security Council’s “paralysis,” in fact, they saved Syria from the genocidal Chapter VII Resolutions. The trajectory of slaughter, from Iraq to Libya and onward was broken, and Syria and its government were saved from the horrors of Security Council “authorized” massacres.

Nevertheless, by numerous devices, the war in Syria continued until today, as the West tried to obliterate President Assad’s government by all methods of disinformation, propaganda, training and funding and incitement of terrorists from throughout the world, attacking the Syrian government, until, finally both Russia and the United States were drawn directly into the crucible of Syria.  On October 19, 2019 two draft resolutions were put to a vote at the Security Council.  The first, submitted by Belgium, Germany and Kuwait, and opening the door to a follow-up War Resolution under Chapter VII was vetoed by Russia and China, following a brilliant speech by Russian Ambassador Nebenzia, exposing the hypocrisy and ulterior motivation of that draft resolution.  The second draft resolution submitted by Russia and China S/2019/757 was opposed by the US, the UK, France and six other members of the Council, with four abstentions, including Indonesia and South Africa. The UK was particularly defamatory and venal in their accusations against China.  Pathological Russophobia is now a given, throughout the West, in a new McCarthyism, possibly more dangerous than the original one.

“Beating the Drums of War” at the UN Security Council: Russia Vetoes Resolution to Implement Syria “No Fly Zone” 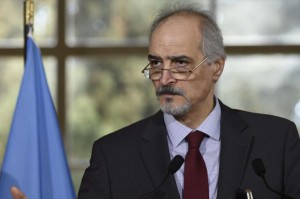 Syrian Ambassador Bashar Ja’afari ended the meeting with one of the most powerful statements in memory:

“Once again, we find ourselves in the Security Council, facing a surreal, absurd scene that the three Western Permanent members of the Council keep repeating as they don the mantle of the humanitarian penholders…It is now confirmed that the ink of that pen dries up when it comes to the war crimes and crimes against humanity that were committed and are still being committed by what is called the international coalition, led by the United States and its proxies from terrorist organizations and affiliated illegitimate militias….We also have tens of thousands of documents that we have obtained from terrorist hideouts, documents written by terrorists, containing vast amounts of information demonstrating that certain Gulf parties are complicit in sponsoring terrorism in Syria….Support is being provided to terrorism in Syria and Iraq.  Did Daesh and the Al-Nusra Front, this human garbage, appear out of thin air?  Who sponsored those terrorists and issued them visas?  Who allowed them to move across international capitals?  Who gave $2,500 to each terrorist in order to work as a sniper and kill Syrians?  Who trained them?  How are they being redeployed from Idlib to Nigeria, Algeria, Afghanistan and Yemen?…What we are suffering today will hit others tomorrow or the day after tomorrow. If Council members are negligent about fighting terrorism in Syria, terrorism will beset them all.  Monsters have come to us from Europe, Arab States and Central Asia.  They are human-shaped monsters.  They must be returned to their homes if international humanitarian law is to be enforced.  Let the monsters return to the countries and capitals they came from.  We do not want them.  We have the right to fight them until the very last among them.  It is a matter of sovereignty under international law.”

The West, having failed to get Security Council “authorization” to attack Syria militarily, using “all necessary means, thanks to the sanity and genuine humanitarian concerns of Russia and China, has, for the past half-decade attempted to totally dismember Syria by “all other means,” either directly, or through its proxy, Saudi Arabia, using the most barbarous terrorists, imported, trained and funded indirectly.

This was denounced on yet another Security Council meeting, September 30:

“It is very unfortunate that, not just in this meeting but in each and every meeting, the Saudis are trying to divert people’s attention from the realities in our region.  It is a fact that Saudi Arabia is the major problem; it is the main source of instability in our region.  Look at the seminaries from Central Asia to Libya. Who is nourishing them?  Who provides financial assistance to the seminaries who train the takfiri and other extremists who have spread throughout the region and elsewhere, destabilizing them entirely?  I do not want to go into our history with Saudi Arabia, but it is well known that its hostility towards Iran is boundless–$110 billion dollars during the course of the war to kill and maim around 1 million Iranians—or for terrorism in Afghanistan, Syria and Iraq.  Who provides those terrorists with arms?  They make accusations against us with regard to human rights, inter alia, while their dark human rights record is so well known.  Eleven out of fifteen of the perpetrators of the crimes on 11 September 2001 here in the United States were Saudi Citizens.”

Today the U.S. military is ostensibly leaving Syria.  Turkey is now engaged, and the Kurds may be switching alliance to the Syrian government. It is impossible to predict future developments within a world today convulsed by riots against austerity measures and deteriorating living standards, from Chile to Lebanon, Spain, Egypt, Iraq, India, etc. etc.  On October 21 the Financial Times reported fears of recession and a background outlook of gloom at the IMF and World Bank meetings in Washington.  Is the last crisis of capitalism imminent, or will an army of “Killer Robots” programmed by the financial elites crush global protest against this obscene level of inequality potentially leading to global fascism?

Carla Stea is Global Research’s correspondent at United Nations Headquarters, New York, N.Y. she is a Research Associate of the Centre for Research on Globalization (CRG)