Is There a Vaccine Cancer Connection?

By Landee Martin
Global Research, October 30, 2019
The Truth About Cancer

“This vaccine has not been evaluated for its carcinogenic or mutagenic potentials or impairment of fertility.”

This phrase or one similar can be found on just about every vaccine package insert and should be justification for any reasonable person to decline vaccination.  However, doctors are not required to give full informed consent regarding vaccines and most people blindly trust their doctors.

Considering the recommended vaccine schedule has tripled in the United States over the last thirty years, parents have begun to question whether this is necessary or valuable to their children. 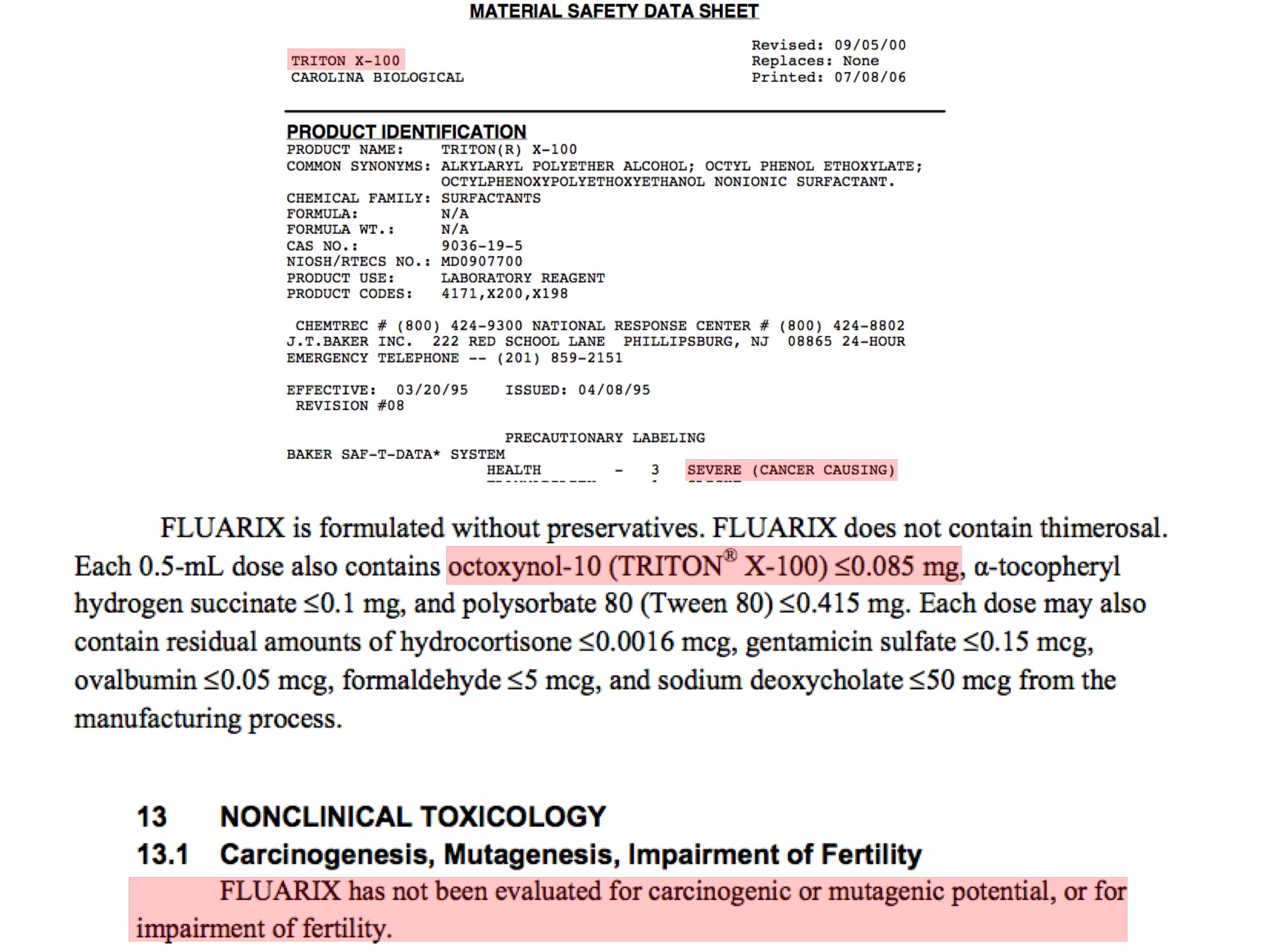 Image of Advisories regarding Triton and Fluarix Vaccines

Coinciding with the ever-increasing vaccine schedule are soaring rates of chronic illness in children, including cancer, which has skyrocketed and is now the leading cause of death by disease in children past infancy.

Government authorities refuse to acknowledge any link between cancer and vaccination, but could injecting toxic chemicals repeatedly into our children, especially at critical intervals in their development be causing cancer in so many?

Toxic Vaccine Ingredients You Need to Know About

Formaldehyde – There is sufficient evidence from cancer studies in humans proving the carcinogenetic effects of this ingredient.  Both the Environmental Protection Agency (EPA) and the International Agency for Research on Cancer admit formaldehyde is a known carcinogen.

Is it a coincidence that formaldehyde has been associated with leukemia and that the number one cancer in children is leukemia?

Mercury Is In Vaccines Too – Mercury is a known carcinogen and for many years children received up to 237 micrograms (mcg) from vaccines during the first two years of life.  This far exceeds the EPA’s recommended safe (to ingest, not inject), level of 1/10th of 1 microgram per kilogram a day.

A rabbit will die if given 35 mcg of mercury.

Thimerosal, which is in many vaccines, is a mercury-containing compound that is 50 times more toxic than plain mercury!  The CDC claims to have removed “most” thimerosal from common pediatric vaccines, leaving only “trace amounts.”

There are NO safe amounts of mercury established for humans and yet, children receive combined vaccines that can build up mercury in the body and cause potential problems.

Aluminum, Yep, It’s In There Too – The Food and Drug Administration (FDA) approved aluminum for use as an adjuvant in human vaccines to boost immune response.  Aluminum is harmful to all life forms.

The FDA limits the dosage to 0.85 milligrams per vaccine to minimize exposure; but children receive other vaccines at the same time that also contain aluminum.

The American Academy of Pediatrics admits that aluminum interferes with many cellular and metabolic processes in the body’s nervous system and tissues.

Repeated exposure to aluminum can have damaging effects and yet children receive repeated injections during the recommended vaccine schedule.  Studies with mice have demonstrated a transient rise in aluminum levels in brain tissue.  Aluminum is also widely associated with breast cancer.

What is Polysorbate 80? – Polysorbate 80 is a toxic substance that should never be ingested or placed on the skin, much less injected, and yet it is in vaccines. Studies with lab rats show Polysorbate 80 has both carcinogenic and infertility effects.

Yet, it’s ironic that this carcinogenic ingredient is found both in Merck’s cancer vaccine, Gardasil, and is also used in chemotherapy given to cancer patients.

Recombinant DNA – A Biohazard? – Speaking of Gardasil, genetically modified HPV DNA, which had firmly attached itself to aluminum, was found in blood samples of a 13 year old girl who became chronically ill following her third dose of the vaccine. Could Recombinant HPV DNA cause human cell mutations and cancer?

While searching for the reason why adolescent girls were suffering such severe side effects after receiving the Gardasil vaccine, Dr. Sin Hang Lee, of Sane Vax, Inc., found that the vaccine was contaminated with rDNA of the Human Papillomavirus. This rDNA from both strains of HPV in the vaccine were firmly attached to the aluminum adjuvant. This now reaches the level of a “dangerous biohazard.” This rDNA is not natural and is genetically modified.  Now the girls who received the contaminated vaccine, have human DNA as well as genetically engineered viral DNA in their bodies. When recombinant DNA is inserted into a human cell, it could stay forever and cause mutations; the results could be catastrophic.

SV40 (Simian Virus) Responsible for Cancer Cases – In the 1950s, Rhesus Monkey kidney cells containing SV40 were used to grow the polio virus. Dr. Maurice Hilleman, MD, a renowned scientist who developed Merck’s vaccine program and dozens of vaccines, made astounding revelations to the public that Merck had been injecting this dangerous virus into people worldwide.

Even after the US government knew about contamination, they allegedly continued to inject children with the contaminated vaccine until the 1990s.

SV40 is known to cause different types  of cancers in laboratory animals including mesotheliomas, lymphomas and brain cancers. 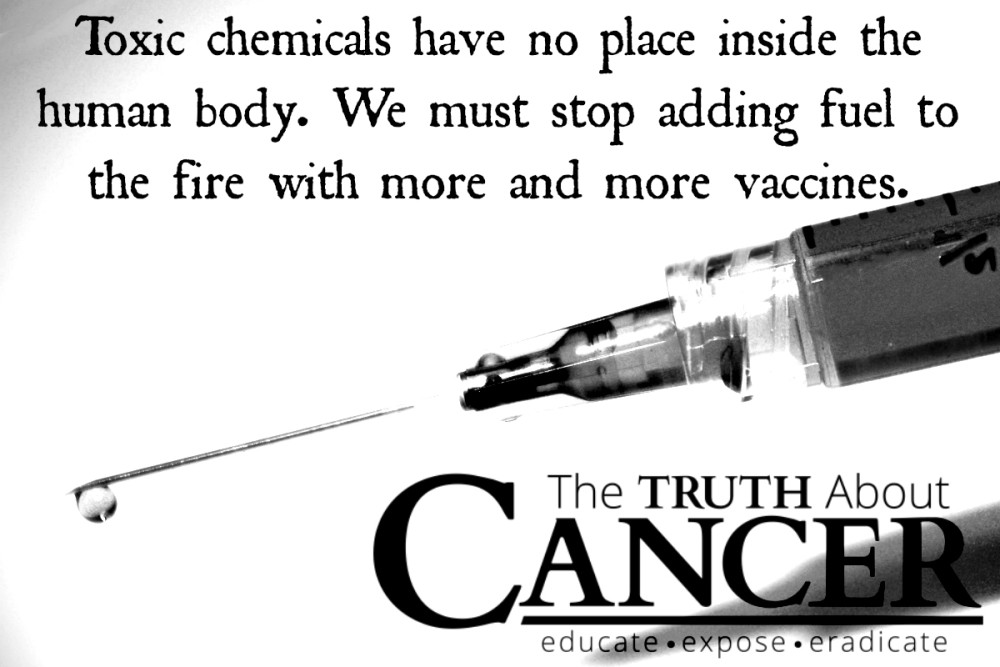 How You Can Build Immunity And Possibly Reverse Vaccine Damage

Anyone who has been injected with vaccines, (which is most people) may have vaccine damage.

According to the vaccine package inserts, a list of side effects include seizures, asthma, diabetes, eczema, allergies, auto-immune disease, autism, and more.  There are many studies linking vaccines to arthritis, chronic cognitive dysfunction, behavioral changes, learning disabilities, motor function impairment, autism, and cancer to name a few.

Many people claim to have reversed vaccine damage by using natural therapies like chelation, bentonite clay, homeopathy and fasting.

It is much better to support the body through nutrition and natural supplements than to inject harmful pathogens and toxins into it.

Eating a diet rich in organic fresh fruits and vegetables along with adequate rest, clean water, sunshine, exercise and minerals will go a long way in keeping the immune system strong and the body running well.

At the end of the day, a strong, healthy, pure, untouched immune system will fight most illnesses, including cancer.

Toxic chemicals have no place inside the human body and the sooner the medical establishment recognizes this, the faster we will see a health progression instead of a continual regression.  We must stop adding fuel to the fire with more and more vaccines.

Unfortunately, allopathic medicine and many governing authorities have endorsed what seems to be an ever increasing, toxic vaccine schedule which has been a calamity to the immune system and has undermined the health of at least two generations, all for the sake of profit.

Landee Martin is a wife and mom to three children. She has a Bachelor of Science in Psychology with a focus on research methods. After noticing some serious reactions following her children’s routine vaccinations, she questioned her medical doctor who refused to acknowledge any connection.

Is There a Vaccine Cancer Connection?