gallery The Conquest of Space is Turning into a Nightmare

Bankruptcy of the West

We are fascinated by space. Rockets and space shuttles are the stuff of our dreams. But the dream is rapidly turning to nightmare and we may justifiably wonder where it is taking us. Strangely, questioning the merits of space activities seems shocking, excruciating, outrageous. How can that be so if the spark of human genius is to be found uniquely in space activities? Perhaps we need to move beyond or debunk the myth of space. Without engaging in nihilism or provoking bitter controversy, we need to conjure another relationship with the idea of space.

Although far removed from the fairly abstract concerns of cosmology or astrophysics, the issue of borders has arisen with the conquest of space. Not in the sense that borders have been pushed back, for that is not the case, but rather in terms of their having finally disappeared from the Earth’s surface. It is quite striking that many astronauts have commented on how artifical our state borders seemed when they looked at the Earth from space, which makes them sound almost naïve given how obvious that is. It was strange to hear how astonished they were by the idea of national borders being invisible from space.

Rockets have not made the universe accessible to us. After all, the distance between the International Space Station and the Earth is comparable to that between the peel of an orange and its flesh. As for the the distance between the Earth and the Moon, compared to our galaxy it amounts to only a tenth of the thickness of a hair compared to the Earth … And our galaxy itself is nothing but a tiny “molecule” in the cosmic fluid. It would be quite ludicrous to take our limited forays into space as representing real access to the deep universe.

The frontier that has disappeared is not the one that separates us from interstellar space, for that indisputably remains. Rather it is the arbitrary boundaries of our countries, our states, our nations, the physical non-existence of which paradoxically astonished the various astronauts who have had the opportunity to observe the Earth from space. We seem to have so deeply internalised the idea of these fictional walls that their absence from the real landscape is seriously disturbing. We had forgotten the superficiality and obsolescence of this drab grid imposed on reality. The fact that highly-trained, ‑educated and ‑qualified men can be astounded by the continuity of land is deeply significant.

Especially since almost no one is affected by borders. Of course, they can be lethal. Refugees die at closed borders, as we are all too tragically reminded in the news. This brutal violence is all too real. But for most living creatures borders do not exist. Billions upon billions of them belonging to millions of species cross borders every day without any idea of their existence or the slightest pause for thought. None are aware of borders, not birds or bees, earthworms, mice, trees (which move from generation to generation) or microbes. Our partitioning of the world seems almost ridiculous in its arrogant stupidity, although we once believed it to be justified and virtually immutable.

But beyond just the simple issue of borders, space poses an eminently symbolic question. The human and financial resources expended on space activities exceed their meagre scientific interest. The endeavour is almost exclusively symbolic, but what does it symbolise? 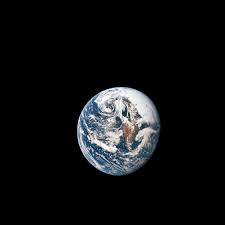 The Apollo missions held a certain fascination for people. A genuine spirit of adventure infused the pioneers of space. The first spacewalks were greeted with deference, even reverence. The encounter with the otherworldliness of the lunar surface was imbued with solemnity. Despite the fierce patriotism that inspired the process, which was aimed at catching up with the Russians, when the astronauts returned to Earth they were celebrated not so much as American heroes but as true ambassadors of humanity. Something powerfully moving was taking place, something that resonated with people.

The symbolism was soon eroded, however, as later Apollo missions revealed a significant shift in attitudes. The astronauts behaved like cowboys, made jokes that verged on bad taste,  played tricks on the mechanics, and relaxed in macho style. Some of the magic was already gone.

Today, an American company boasts about its feat of putting an automobile into orbit, while Donald Trump seems to wish to restart a frenetic lunar programme simply to challenge the Chinese … What sense is there in launching a lunar programme when life on Earth is dying? Not to mention that a few billionaires – themselves largely responsible for devastating our planet – are beginning to consider migrating to space when the Earth becomes unlivable. Of course they will not succeed, but the picture is not just ugly, it is intolerable, especially since those planning to flee are those most responsible for the shipwreck.

The possibility of building a space hotel for the super-rich was recently floated. Tens of thousands of satellites are set to be deployed – severely damaging the prospects for any astronomy worthy of the name – in pursuit of facilitating access to the Internet from the remotest corners of the globe. All this is taking place under the aegis of a man who wants to play Rambo and boasts of marketing a flamethrower and who is right now unveiling a semi-armoured, futuristic-looking pickup to entertain Californians in need of 2-ton gadgets (it also touts the wonders of a laser window-cleaning technology that is bringing tears to the eyes of Silicon Valley).

Rightly or wrongly, space flight has been associated with the notion of free-market heroism. The symbolism seems to me to have changed radically. To my mind, it has become a semiotics of arrogance. It has become a game of sterile domination and a factory churning out fictional heroes devoid of any scientific, ethical or aesthetic aim, devoid of any epistemic elegance.

As we are being threatened by a major ecological crisis that requires us to rapidly recover a sense of moderation for our very survival, how can it make any sense to rush mindlessly into a satellite constellation operated by a private company, which will exponentially increase the use of energy-devouring digital technologies?

Animal populations are collapsing, wilderness areas are disappearing before our very eyes, temperatures are skyrocketing, pollution is poisoning the air, water and soils … the Earth is ailing and needs our care and love. It is under major attack: a massive extinction that is tantamount to deliberate extermination. How incredibly cynical of us to want to “conquer” space when we are right now devastating our own world before we have ever really understood it. We know virtually nothing about the wonders that surround us, including the complex symbiotic relationships among trees, subtle insect behaviours and the emotions of small mammals. Are we destined to destroy every last bit of this fragile magnificence emanating from billions of years of uninterrupted evolution and instead set our sights on the drab and lifeless ochres of the surface of Mars?

Of course, the quest for knowledge must go on. There is no question of environmental awareness calling a halt to the adventure of human knowledge. Quite the contrary. We must acknowledge that some satellites help us understand climate change or answer astrophysical questions. But the conquest of space as it stands – especially manned flights – has little to do with the gentle and patient humility involved in real discovery of the world around us. The quest to conquer space now seems more like the cravings of an insatiable demiurge.

Like a final nihilistic erection, the immense phallic structures of the rockets signal the bankruptcy of humanity become blind and arrogant, bereft of awareness of the here and now as we lust after a never-neverland elsewhere. Humanity‘s craving for desacralization monstrously defiles a quest that might once have been noble.

The Western world’s inability to reflect on its own values ​​is staggering when, in addition to wreaking neocolonial havoc, they lead to its own extermination.

This article was originally published in French, translated into English by Claire Edwards.

Aurélien Barrau is a French astrophysicist.