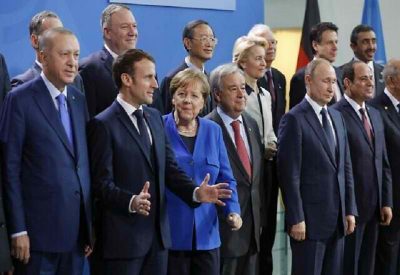 Berlin’s Libya summit ended without any real changes to the status quo despite all relevant foreign parties to that country’s civil war superficially agreeing to some key points such as the need to abide by the arms embargo and commit to a ceasefire as soon as possible, meaning that General Haftar still holds all the cards so the fate of the country is ultimately his and his GCC+ patrons’ to decide, though Turkey will do its utmost to deter them from making another military push on the capital.

A Lot Of Blah-Blah In Berlin

Sunday’s Libya summit in Berlin represented an unprecedented push towards peace after the top representatives from the most relevant foreign parties to that country’s civil war met in the German capital to discuss an end to the long-running conflict with the leaders of that North African state’s two main warring factions, Prime Minister Serraj of the UN-recognized Government of National Accord (GNA) and General Haftar of the Libyan National Army (LNA). The event ended without any real changes to the status quo apart from the non-Libyan parties superficially agreeing to some key points such as the need to abide by the arms embargo and commit to a ceasefire as soon as possible, meaning that General Haftar still holds all the cards so the fate of the country is ultimately his and his GCC+ patrons’ to decide, though Turkey will do its utmost to deter them from making another military push on the capital.

The author analyzed last week’s developments which paved the way for this summit in two articles titled “Who’d Have Thought 9 Years Ago That Russia & Turkey Would Bring Peace To Libya?” and “Russia’s Unsuccessful Libyan Peace Summit Was A Good Start“, which should be skimmed by the reader if they’re not already familiar with them but can be summarized as asserting that Russia and Turkey’s joint efforts over a week ago set into motion the first stage of what’s bound to be an extended peace process. It was concluded in the last analysis that nothing of significance will change unless the LNA’s Egyptian, Emirati, and Saudi (GCC+) backers decide that it’s in their interests for this to happen, which hasn’t yet occurred and might never will. It doesn’t matter what they superficially agreed to in Berlin since there isn’t any enforcement mechanism to compel their compliance.

Agreements Without Enforcement Mechanisms Are Meaningless

The UN or a “coalition of the willing” would have to simultaneously launch maritime and mainland operations to search every car and piece of cargo coming into the country, which is beyond their capabilities, let alone mandate. The GCC+ could easily send support to General Haftar through Egypt, Sudan, or in the worst-case scenario, even Chad and Niger if it came down to it whereas the GNA’s foreign supporters such as Turkey are entirely dependent on maritime and air routes that are much easier to identify and intercept. The Libyan Civil War has long been a proxy struggle between many forces but its latest manifestation can be simplified as being between the secular-supporting GCC+ and the Muslim Brotherhood-backing Turkey, which is ironic since the Gulf Kingdoms are religious monarchies whereas Turkey is officially a secular republic. The other relevant foreign powers support one side or the other, while Russia is trying to “balance” between both.

There is no trust whatsoever between these two opposing camps, which support their proxy of choice for varying reasons that are in one way or another connected to their belief that that faction will most likely advance their national interests as they understand them if it’s successful in winning the civil war. As such, it can be expected that neither the GCC+ nor Turkey will curtail their support to the LNA and GNA respectively, especially since there aren’t any enforcement mechanisms compelling them to do so. The LNA is the more militarily powerful of the two after already conquering most of the country and nowadays being positioned just outside of the capital while the GNA is totally on the defensive and can only hope that Turkey’s recent military intervention can save it from collapse. The international community, excluding the GCC+ of course, appears to be siding with the GNA given their calls for an immediate ceasefire to save it, but it might not be enough.

It really all depends on whether General Haftar and his GCC+ backers are confident enough with their military capabilities (which might no longer include the speculative Russian mercenaries that were reportedly fighting in his support as hypothesized by the author in the first of his two hyperlinked analyses from earlier in this article) and have the political will to defy the rest of the world. About the first, it’s unclear at this point in time exactly what Turkey has done to improve the GNA’s defenses, but whatever it is appears to have had at least a temporary deterrence effect on the LNA. Concerning the second-mentioned, because of the lack of any enforcement mechanisms, the international community cannot impose any serious costs on the LNA other than forthcoming sanctions which could be countered by the GCC’s financial reserves if need be. Eventually, the rest of the world would just have to accept that General Haftar rules Libya if he’s successful in capturing the capital.

His forces don’t want war, however, and would rather have a “clean victory” that sees the GNA capitulate to their demands to disarm and demobilize all the militias that they regard as terrorist groups as well as remove Turkish forces from the country, ergo why they’ve shut down the country’s oil supply in recent days in order to drain the internationally recognized government of its precious finances. This in turn increases the costs for the GNA’s foreign supporters, especially Turkey, who might have to extend emergency financial assistance to their proxies for an indefinite period of time, which might not be economically feasible for them unless they all come together again in another Berlin-like conference and work out each parties’ contribution to the cause (in parallel with sanctioning the LNA for its actions). It’s unrealistic that Turkey would abandon Tripoli at this point, so it’s tempted to continue with “mission creep” by possibly commencing a “financial intervention” too.

From Civil War To Standoff

So long as Turkish military support to the GNA continues to provide credible deterrence to the LNA, then the rest of the internationally recognized government’s foreign supporters will feel more comfortable extending it other means of assistance as well, especially financial. Nobody wants to invest hundreds of millions and potentially even several billion dollars into the side that might be about to lose at any moment, so the GNA’s survival hinges on how serious Turkey is about comprehensively supporting it. Ankara’s political will hasn’t wavered one bit, which inspires confidence in its peers to seriously consider following suit. Likewise, the GCC+ hasn’t wavered at all in its support of General Haftar, hence why he’s refused to “compromise” despite heavy international pressure to do so (though crucially without any enforcement mechanisms to compel him, at least not yet). In other words, the Libyan Civil War has now turned into the Libyan Standoff, with this new state of affairs either lasting a short while or becoming the new status quo depending on subsequent developments.

General Haftar Is Trying to Trick Turkey into Overextending Itself in Libya
The original source of this article is Global Research
Copyright © Andrew Korybko, Global Research, 2020
https://www.globalresearch.ca/general-haftar-holds-all-cards-after-berlin-libya-summit/5701125