gallery China’s New Coronavirus: An Examination of the Facts

The Western mass media have discussed the new corona virus that began in the city of Wuhan in Central China but, apart from repetitive small details and the inevitable China-bashing, not much light has been shed on the circumstances. My initial commentary here is composed from a medley of nearly 100 Western news reports, primarily ABC, CBS, CNN, AFP, and from some Chinese media. Officially called the novel coronavirus (2019-nCoV), the contagion is a respiratory illness, a new type of viral pneumonia, in the same family of infections as SARS and MERS.

At the time of writing, Chinese health authorities announced 830 confirmed cases caused by this virus in 29 provincial-level regions in the country, resulting so far in 25 deaths primarily among the elderly who had been suffering serious prior medical conditions and were perhaps in weakened physical states. A few cases have been reported in other countries, Thailand, Korea, Singapore, Vietnam, the US, Japan, all of which involved ethnic Chinese who had traveled to Wuhan. The virus initially showed no signs of spreading between humans, but then may have mutated with 15 medical workers in Wuhan apparently contracting the pathogen from other victims. It still remains unclear how easy it is to contract it from another infected individual. 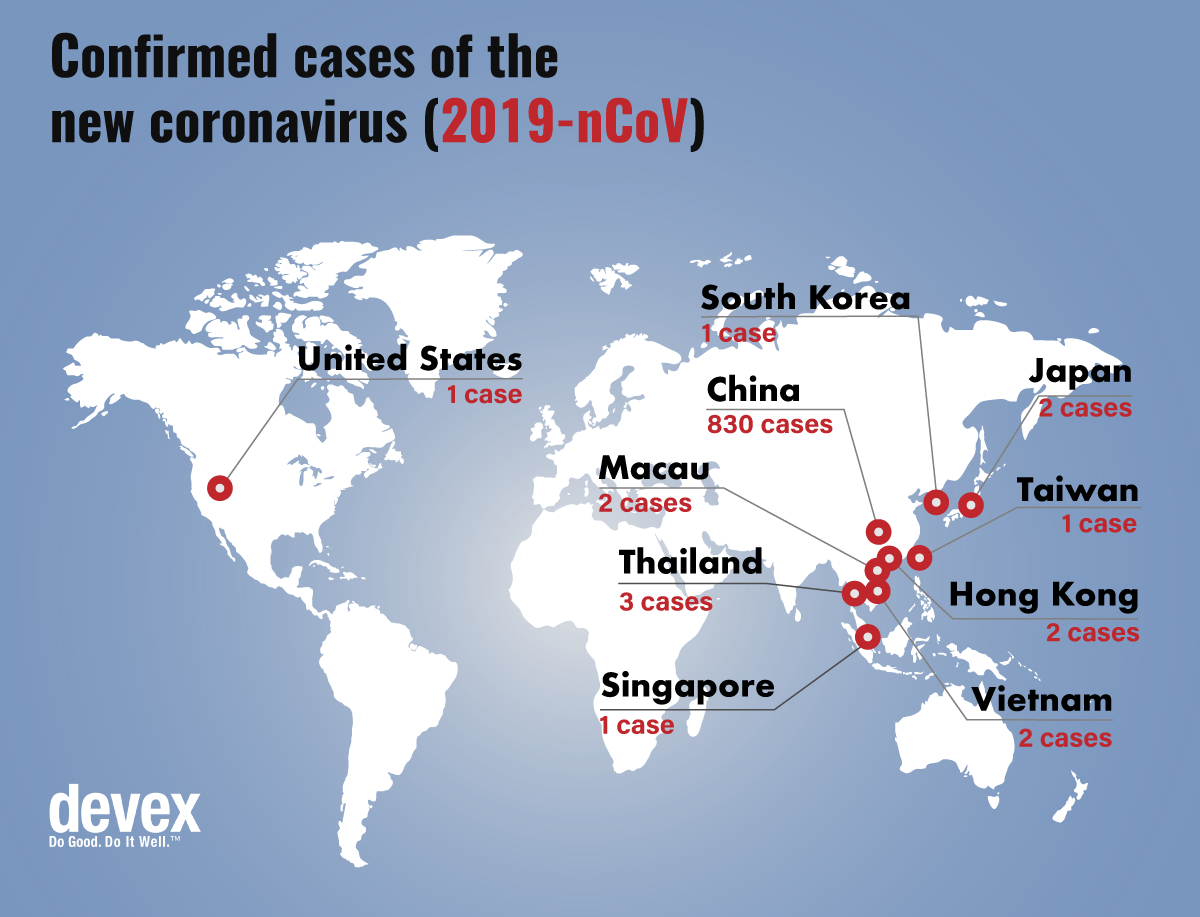 .
The initial symptoms were mild, which permitted many people to travel before stronger symptoms were detected. The first occurrences in December thus appeared to be of minor concern. The incubation period has not been definitively stated but, once infections began, the spread was surprisingly rapid after the first case was confirmed on December 31: on January 3, 44 cases; January 21, 225 cases, January 24, 830 cases. Local medical authorities have said the true extent of the Wuhan coronavirus is unclear, and the early official figures may have been an underestimation since the mild symptoms and delayed onset meant infections may have been undetected.
.
All the evidence suggests the Chinese authorities acted effectively as soon as they realised the danger they might be facing. Medical authorities immediately declared the outbreak, and within a week they had identified the pathogen and also determined and shared the genome sequence with the WHO and other parties, a sufficiently speedy response that earned praise from the WHO and scientists around the world.
.
Remembering the SARS troubles, they did much more. In most large centers in the country, all sports venues, theaters, museums, tourist attractions, all locations that attract crowds, have been closed, as have all schools. All group tours have been cancelled. Not only the city of Wuhan but virtually the entire province of Hubei has been locked down, with all trains, aircraft, buses, subways, ferries, grounded and all major highways and toll booths closed. Thousands of flights and train trips have been cancelled until further notice. Some cities like Shanghai and Beijing are conducting temperature tests on all roadways leading into the cities. In addition, Wuhan is building (in five days) a portable hospital of 25,000 square meters to deal with the infected patients. As well, Wuhan has asked citizens to neither leave nor enter the city without a compelling reason, and all are wearing face masks.
.
The scale of the challenge of implementing such a blockade is immense, comparable to closing down all transport links for a city 5 times the size of Toronto or Chicago, two days before Christmas. These decisions are unprecedented, but testify to the determination of the authorities to limit the spread and damage of this new pathogen. They not only address the gravity of the situation but also the seriousness of consideration for the public health, unfortunate and difficult decisions since the holiday is being destroyed for hundreds of millions of people. Most public entertainment has been cancelled, as have tours, and many weddings as well. The damage to the economy during this most festive of all periods, will also be enormous. Hong Kong will suffer severely in addition to all its other troubles, since visits from Mainland Chinese typically support much of its retail economy during this period.
.
The Chinese New Year is the most important festival for Chinese. Saturday, January 25, is the first day of the Lunar New Year, a festive period that typically sees the largest mass-movement of people on the planet as Chinese flock back to their hometowns to be with relatives. No health authority has ever tackled the challenge currently faced by China, as the country grapples with a new coronavirus just as hundreds of millions prepare to travel.
.
And of course the Western media had a field day of schadenfreude. CNN published a report – a bit too gleefully, I thought – on the potential damage to China’s economy: (1)
.

“China’s economy is slumping and the country is still suffering the effects of the trade war with America. An outbreak of a new and deadly virus is the last thing it needs. The Wuhan coronavirus has already roiled Chinese markets and thrown plans for the upcoming Lunar New Year holiday into chaos for millions of people. The world’s second biggest economy grew at its slowest pace in nearly three decades last year as it contended with rising debt, cooling domestic demand and US tariffs, many of which remain in place despite a recent truce. Beijing is worried about unemployment, too, and has announced a wave of stimulus measures in recent weeks aimed at preventing mass layoffs. . . The Wuhan coronavirus outbreak could spark widespread fear and spur people to hunker down and avoid going outside. That kind of behavior would deal a huge blow to the service sector, which now accounts for about 52% of the Chinese economy.” [And so on . . .]

.
The Western media have already staked out their claim to the fundamentals, all media sources claiming the virus was transferred to humans from animals or seafood. The media have added fuel to the fire by claiming the virus emerged from “illegally traded wildlife” in a market “where offerings reportedly include wild animals that can carry viruses dangerous to humans”, and that this virus “jumped into the human population from an infected animal”. Chinese officials stated that the virus appears to have originated at a seafood market in Wuhan, though the actual origin has not been determined nor stated by the authorities, and is still an open question perhaps primarily since viruses seldom jump species barriers without human assistance.
The Spread of the Mers-CoV Virus: The Black Death of the XXI Century Waiting to Pounce
.
While there is no evidence of biowarfare, a virus outbreak in the city of Wuhan immediately prior to the Chinese New Year migration could potentially have dramatic social and economic repercussions. Wuhan, with a population of about 12 million, is a major transport hub in Central China, particularly for the high-speed train network, and with more than 60 air routes with direct flights to most of the world’s major cities, as well as more than 100 internal flights to major Chinese cities. When we add this to the Spring Festival travel rush during which many hundreds of millions of people travel across the country to be with their families, the potential consequences for the entire country are far-reaching.
.
Comparison with SARS
.
This is a novel Coronavirus (2019-nCoV), an entirely new strain related to the MERS (MERS-CoV) and the SARS (SARS-CoV) viruses, though early evidence suggests it is not as dangerous.
.
SARS was proven to be caused by a strain of the coronavirus, a large family of mostly harmless viruses also responsible for the common cold, but SARS exhibited characteristics never before observed in any animal or human virus, did not by any means fully match the animal viruses mentioned above, and contained genetic material that still remains unidentified – similar to this new corona virus in 2019.
.
Virologist Dr. Alan Cantwell wrote at the time that “the mysterious SARS virus is a new virus never before seen by virologists. This is an entirely new illness with devastating effects on the immune system, and there is no known treatment.” Dr. Cantwell also noted that the genetic engineering of coronaviruses has been occurring in both medical and military labs for decades. He wrote that when he searched in PubMed for the phrase “coronavirus genetic engineering”, he was referred to 107 scientific experiments dating back to 1987. To quote Dr. Cantwell:
.

“I quickly confirmed scientists have been genetically engineering animal and human coronaviruses to make disease-producing mutant and recombinant viruses for over a decade. No wonder WHO scientists identified the SARS/coronavirus so quickly. Never emphasised by medical news writers is the fact that for over forty years scientists have been “jumping species” with all sorts of animal and human viruses and creating chimera viruses (viruses composed from viruses of two different species). This unsupervised research produces dangerous man-made viruses, many of which have potential as bioweapons. Certainly SARS has the hallmarks of a bioweapon. After all, aren’t new biological warfare agents designed to produce a new disease with a new infectious agent? As in prior military experiments, all it might take … to spread SARS is an aerosol can . . .” (2) (3) (4)