gallery Americans Deceived, and Kept in the Dark, by ‘Our’ ‘News’ Media: Harnessing Public Support for Continued US Occupation of Iraq

Iraqis are furious that the U.S. continues its military occupation — a continuation of the 2003 U.S. invasion — of their country, after the U.S. was finally ordered out by Iraq’s Government on January 5th.

Iraqis are furious that the U.S. continues its military occupation — a continuation of the 2003 U.S. invasion — of their country, after the U.S. was finally ordered out by Iraq’s Government on January 5th. U.S.-and-allied ‘news’-media constantly lie about this and about anything else which reveals the ugly imperialist reality of U.S. foreign policy. Americans are deceived, and kept in the dark, by ‘our’ ‘news’-media.

First, the U.S.-and-allied ‘news’-media lied and reported that U.S. troops were only ‘requested’ to leave — though Iraq’s Parliament had unanimously voted for a resolution to demand the U.S. to leave, and Iraq’s Prime Minister supported it 100% so that the entire Iraqi Government were demanding — not merely ‘requesting’ — the U.S. to leave.

Then, when the Trump regime refused to leave, a call went out by an opponent of the occupation, Muqtada al-Sadr, for Iraqis to march in Baghdad on January 24th to demand that the U.S. regime immediately comply with their Government’s demand; and, on the morning of Friday January 24th, America’s AP ‘news’ agency bannered “Iraqis rally against US troops, demanding they leave”, and reported:

“Tens of thousands of Iraqis marched peacefully through Baghdad on Friday to demand the ouster of U.S. troops from their country. … There were no official estimates of the turnout and organizers gave varying figures, but it clearly fell short of the ‘million-man’ march that had been called for by al-Sadr.”

That’s a lie, because there already had been tweeted photos and videos of the march showing that

“This is a Million-Man miracle for the largest human gathering in Iraq’s history. This morning in the capital, Baghdad, struck by a two-million human-flood in a demonstration to expel American troops and to end their bases in Iraq.”

And: “The Chief of Police in Baghdad just estimated the number of Iraqis protesting against the US’ presence in Iraq today to be in excess of one million people.”

Photos like this were shown, which would never be shown in U.S.-and-allied ‘news’-media. And this tweet showed four such photos, and said, 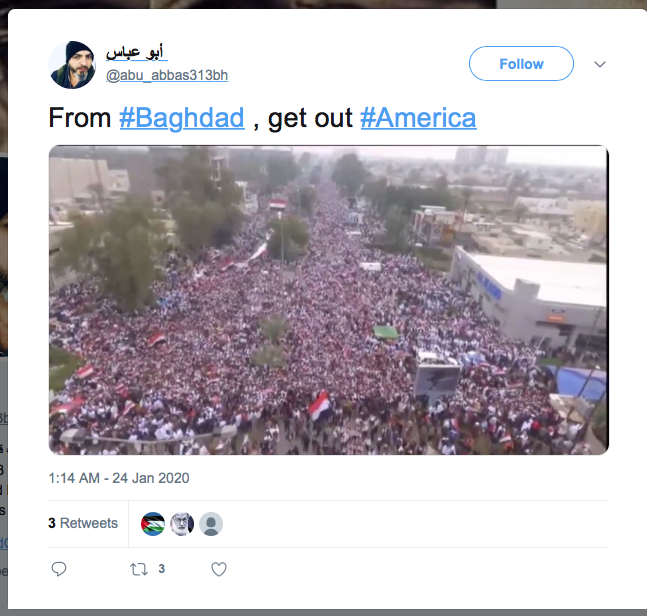 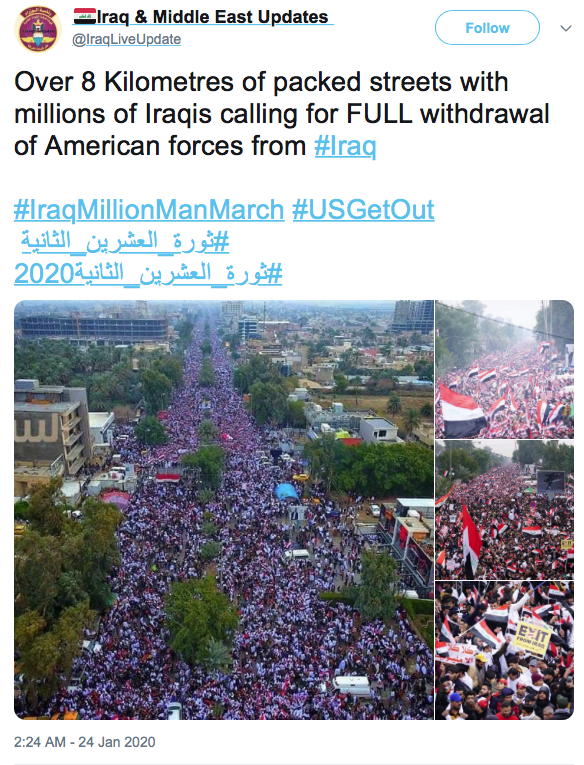 “Over 8 Kilometres of packed streets with millions of Iraqis calling for FULL withdrawal of American forces from #Iraq.”

That’s 5 miles packed with people, which would be around two million people. All of this was before the AP ‘journalists’ issued their ‘news’-report saying “Tens of thousands of Iraqis marched.”

The U.S. regime uses other countries’ territory for its own purposes, regardless of what the residents in the invaded/occupied land want or need. In the case of Iraq, the purpose of invading that land was theft of Iraq’s oil. Until 2003, Iraq’s oil had been nationalized — a national instead of private investor-owned asset. George W. Bush cut U.S.-and-allied investors in on it. (Donald Trump wants not only Iraq’s oil but Syria’s, and so U.S. taxes are funding propaganda to help steal that too for American billionaires.)

The U.S. regime had invaded Iraq on 20 March 2003 based entirely on lies by the U.S. President and his Administration and the U.S.-and-allied ‘news’-media, about “Saddam’s WMD” that they had no evidence existed and which actually did not exist, but the gullible U.S.-and-allied masses believed those lies and still believe the regime’s lies — and so supported U.S.-and-allied invasion-destruction of Libya 2011, Syria 2012-now, Yemen 2015-now, and Iran-yet-to-come, and the leading U.S. Presidential candidates are Donald Trump and Joe Biden, both of whom are committed to those very same imperialistic (or ‘neoconservative’) foreign policies, in order to serve America’s billionaires, who own-control not just the ‘news’-media but the Government, in this ‘democracy’.

Investigative historian Eric Zuesse is the author, most recently, of  They’re Not Even Close: The Democratic vs. Republican Economic Records, 1910-2010, and ofCHRIST’S VENTRILOQUISTS: The Event that Created Christianity.

Featured image is from Massoud Nayeri

Iraqis Rise Up Against 16 Years of ‘Made in the USA’ Corruption
The original source of this article is Global Research
Copyright © Eric Zuesse, Global Research, 2020
https://www.globalresearch.ca/u-s-news-media-hide-truths-u-s-public-supports-invasions/5701738