gallery The ‘Deal of the Century’ Is Apartheid

The ‘Deal of the Century’ resurrects and restores grand apartheid, a racist political system that should have been left in the dustbins of history.

With great fanfare, President Trump finally unveiled his long-anticipated Middle East peace proposal. The proposal was labeled ‘The Deal of the Century’ because it was supposed to offer an even-handed and just solution to one of the world’s most intractable conflicts. Instead it does something very different. The ‘Deal of the Century’ resurrects and restores grand apartheid, a racist political system that should have been left in the dustbins of history.

Under President Trump’s newly unveiled peace plan, the Palestinians will be granted limited autonomy within a Palestinian homeland that consists of multiple non-contiguous enclaves scattered throughout the West Bank and Gaza. The government of Israel will retain security control over the Palestinian enclaves and will continue to control Palestinian borders, airspace, aquifers, maritime waters, and electromagnetic spectrum. Israel will be allowed to annex the Jordan Valley and Jewish communities in the West Bank. The Palestinians will be allowed to select the leaders of their new homeland but will have no political rights in Israel, the state that actually rules over them.

President Trump’s plan for racial control and segregation should sound disturbingly familiar. Indeed it should immediately bring to mind the Bantu homelands which were the cornerstone of South Africa’s ‘grand apartheid’. While ‘petty apartheid’ was the term used to describe racial segregation on buses and public facilities, ‘grand apartheid’ referred to the many laws which enforced territorial and political separation between black and white South Africans. 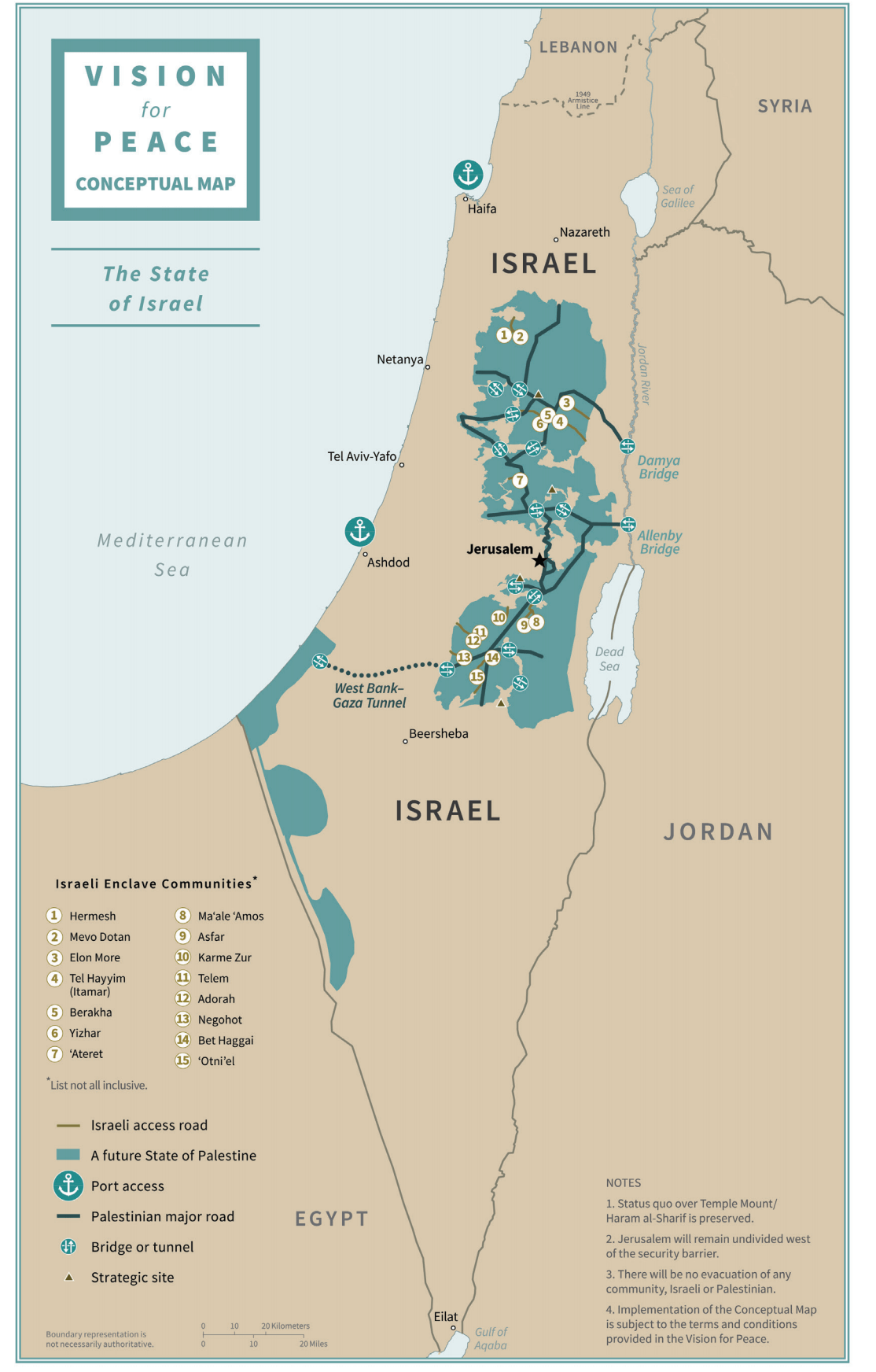 Map of the future Israeli state in the Trump administration plan. (Source: Mondoweiss)

Like South Africa’s grand apartheid, the Trump plan physically and politically separates Palestinians by placing them within a non-contiguous homeland (Areas A and B and Gaza), and declaring them citizens of that homeland. Like South Africa’s grand apartheid, the Trump plan grants the Palestinian homeland autonomy over civil matters like education and healthcare, while critical areas such as trade, immigration, and security will remain under Israeli control. Like South Africa’s grand apartheid, the Trump plan is political sleight of hand: a thinly veiled attempt to claim that Israel, a state that rules over roughly the same number of Jews and Palestinians, is actually a Jewish-majority state. Also like apartheid South Africa, the Trump administration claims the homelands are a temporary solution. Once the indigenous population proves itself ready for self-governance they will one day be granted something that resembles a state.

Using a combination of financial sticks and carrots, some of which were unveiled last June at the economic summit in Bahrain, the Trump administration will try to force Palestinians to accept the ‘peace plan’ and declare independence within their homeland, just as the apartheid South African government once tried to force the native black population to declare independence within their Bantustans. While the crony leadership of some Bantustans did indeed declare independence, South Africa’s grand apartheid ultimately failed because local leaders, including the African National Congress and the legendary Nelson Mandela, waged a determined and powerful international campaign against apartheid.

President Trump’s peace plan was labeled the ‘Deal of the Century’ because it was supposed to bring peace and dignity to the people of the Middle East. Instead the ‘peace plan’ does the exact opposite and resurrects apartheid, a racist political system that should have been left in the dustbins of history.

Sheena Anne Arackal holds a master’s degree from the Harris School of Public Policy at the University of Chicago, and a doctorate in political science from the University of Illinois at Urbana-Champaign. Now based in Houston, Texas, she specializes in the field of ethnic conflict.