If there ever was a “kitchen sink” quarter, Boeing just had it.

Moments ago, the ailing US aerospace giant reported Q4 earnings which prompted traders to do a double take after revenues cratered by 37% Y/Y, down from $28.3BN a year ago, and nearly $4 billion below the Wall Street consensus of $21.7BN; Q4 EPS was a whopping loss of $2.33/share, compared to expectations of a $1.47 profit, and down from $5.48 a year ago, resulting in the worst quarter in over two decades. 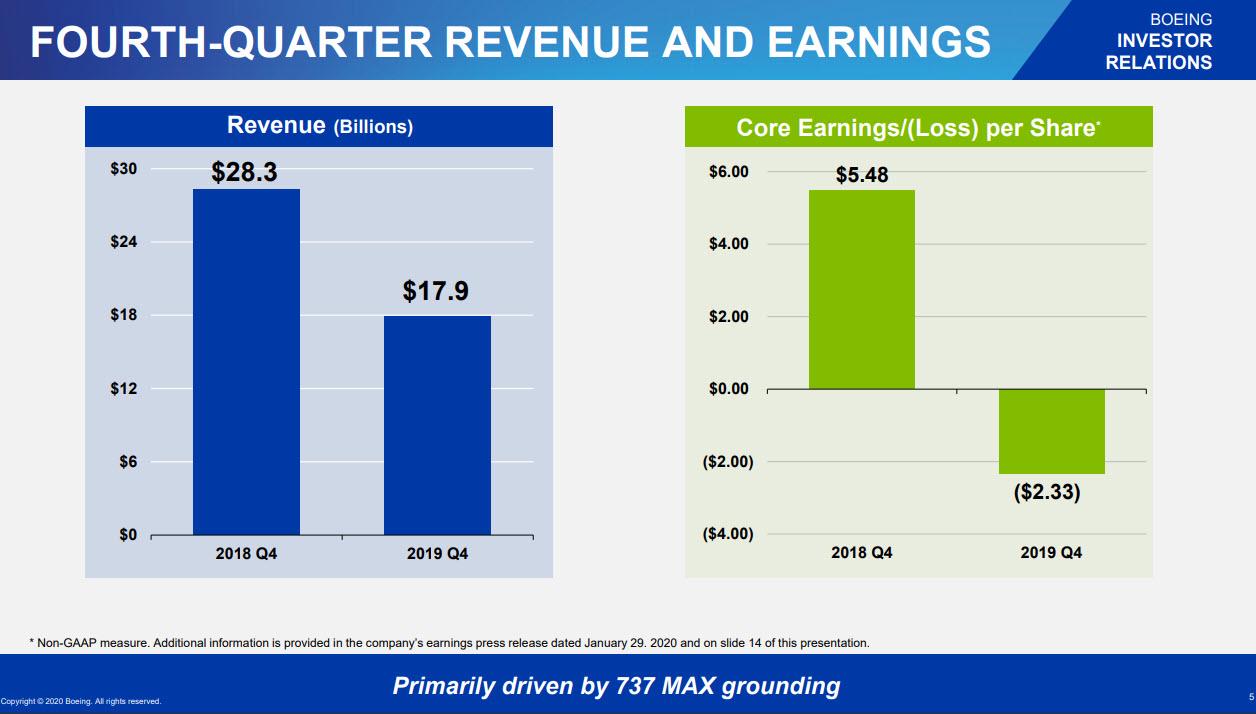 As a result of the abysmal quarter, Boeing posted an annual loss for the first time since 1997, the last time the plane maker had to shut down production of its cash-cow 737 jetliner. Core loss per share was $3.47 in 2019, down from $16.01 a year ago, with operating cash flow tumbling to a $2.4BN cash burn.

Predictably, the biggest item here was the continued grounding of the 737 MAX or rather attempts to get it back in the air, and in Q4 the company laid out its latest estimated costs for the 737 Max grounding, which as Bloomberg put it, “is a doozy” at $18.6 billion:

The full details of the 737MAX kitchen sinking can be found here: 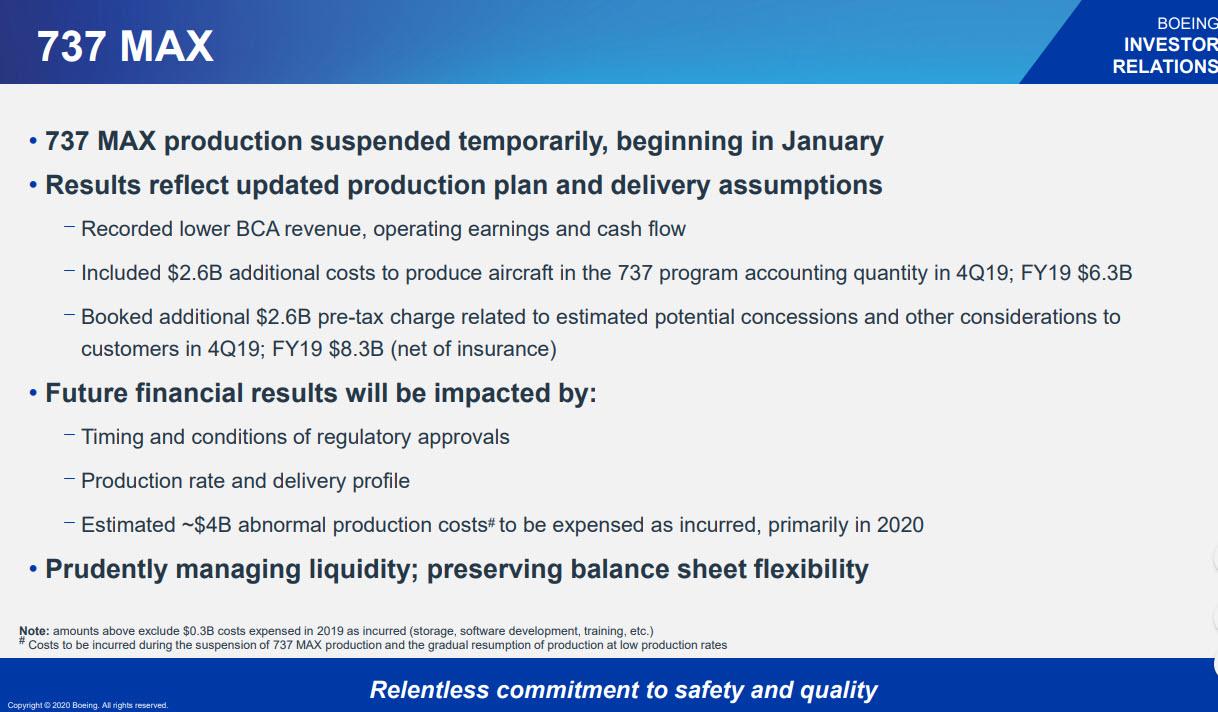 The continued grounding of the 737 MAX means that Boeing’s commercial airplane inventory is now a record high, rising 26% from a year earlier as the company continues to produce planes that nobody wants to buy (as they can’t fly them). 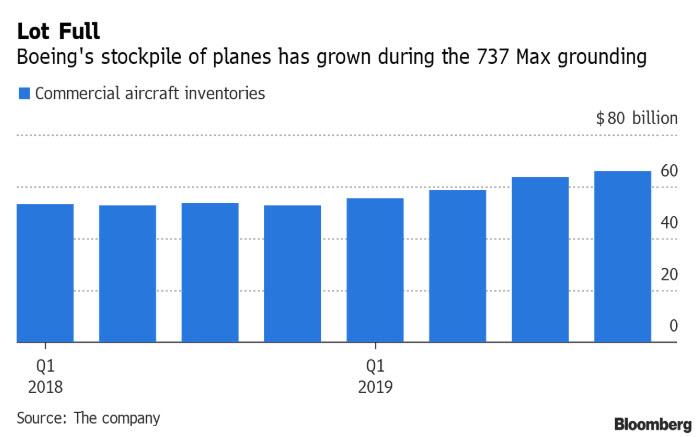 If It’s a Boeing, I’m Not Going

But wait there’s more, because it’s not just 737MAX anymore: as had been leaked previously, Boeing also confirmed that it is cutting 787 Dreamliner output to 10/month in early 2021, a number which it expects to return back ti 12 planes/month in 2023 (but may not). One hopes this is not on the same ground as the, pardon the pun, 737 MAX grounding. Boeing also reported that the 787 deferred production cost in 4Q was $18.7 billion, that’s down from $19.8 billion in 3Q and $23.0 billion a year ago.

And so, with earnings in freefall, it is hardly a surprise that operating cash flow plunged from $15.3BN to cash burn of $2.4BN in Q4 which however was modestly better than the $3.9BN expected… 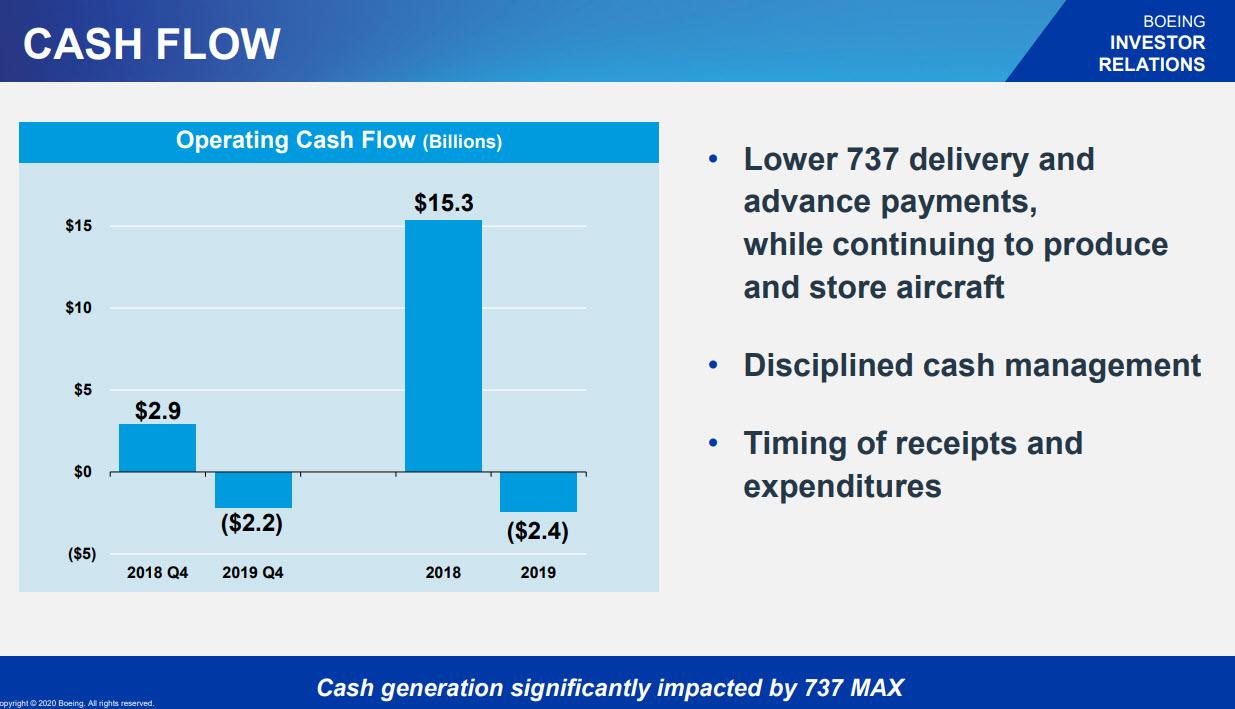 … and with the company keeping cash at roughly $10BN, this meant that total debt rose to a new record high of $27.3BN in total debt. 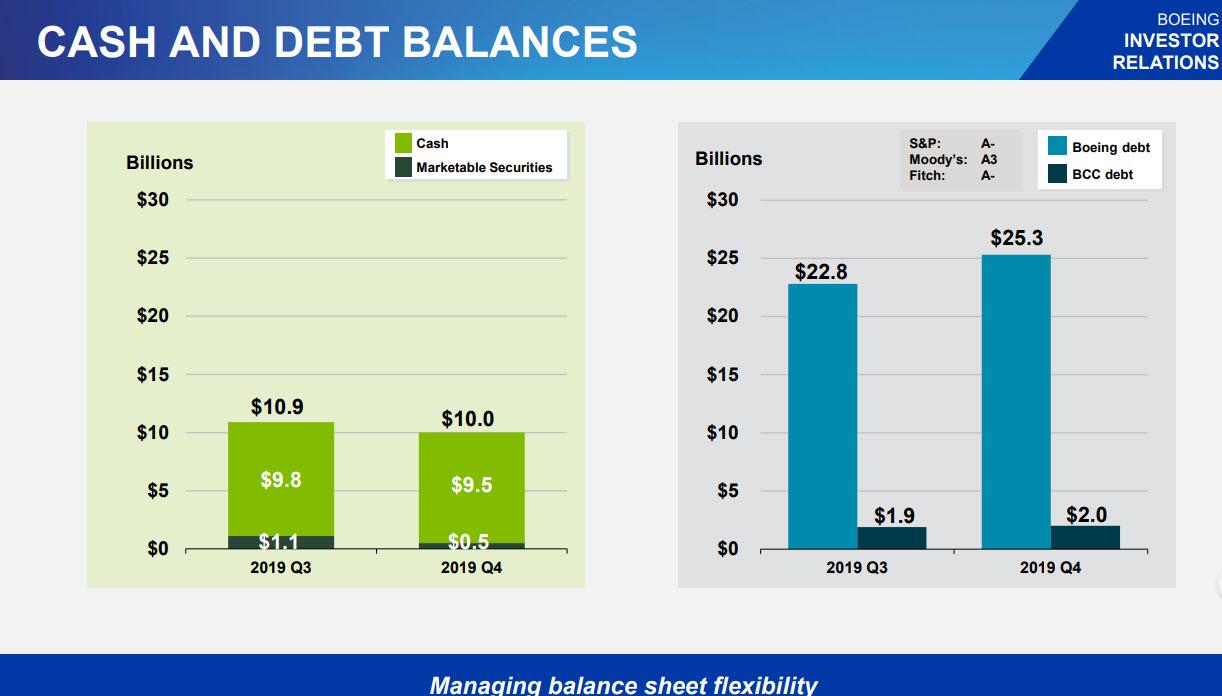 Don’t worry though, the company’s dividend is safe and sound: Boeing paid $1.2 billion of dividends in the quarter.

Commenting on the result, the company’s new CEO Calhoun regurgitated the same old trite pablum we have come to expect from the company:

“We are focused on returning the 737 MAX to service safely and restoring the long-standing trust that the Boeing brand represents with the flying public. We are committed to transparency and excellence in everything we do. Safety will underwrite every decision, every action and every step we take as we move forward. Fortunately, the strength of our overall Boeing portfolio of businesses provides the financial liquidity to follow a thorough and disciplined recovery process.”

And while the stock initially tumbled on the abysmal results, it then promptly rebounded… 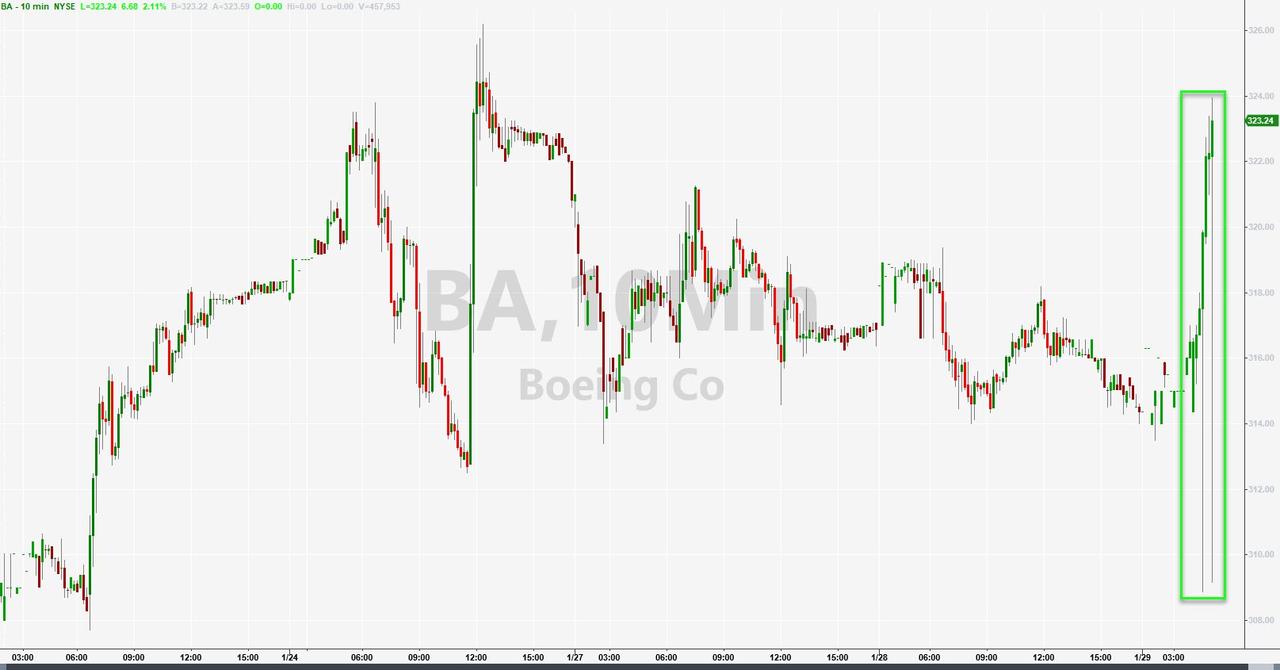 … as the sellside quickly decided that it can’t possibly get any worse, or as Bloomberg put it, Calhoun has “really brought forth everything,” trying to put a “bottom” on the bad news at Boeing so the jet maker can start trying to “take the news flow positive from here.”

As a reminder, this is what the market thought about last quarter too, and everyone knows what happened next.

Incidentally, for Boeing the only question that matters is a simple one: if and when the 737 MAX is allowed to return to the sky again, will anyone ever want to fly on that airplane again?