The three sites chosen for the news bases, Erbin, Sulimania and Halabja are all extremely close to Iran, with Halabja just eight miles from its border.

Less than a week after millions of Iraqis took to the streets demanding the U.S. military leave for good, the United States announced that is planning to build three new military bases in Iraq, according to military news service Breaking Defense. The three sites chosen – Erbin, Sulimania and Halabja – are all extremely close to Iran, with Halabja (the site of the 1988 chemical weapons attack) just eight miles from the border.

The news will come as a shock to the Iraqi parliament, who earlier this month voted overwhelmingly (with some abstentions) to expel American forces from the country. But the U.S. government has flatly refused to leave.

“At this time, any delegation sent to Iraq would be dedicated to discussing how to best recommit to our strategic partnership — not to discuss troop withdrawal, but our right, appropriate force posture in the Middle East,” said State Department spokesperson Morgan Ortagus, adding, “We strongly urge Iraqi leaders to reconsider the importance of the ongoing economic and security relationship between the two countries… We believe it is in the shared interests of the United States and Iraq to continue fighting ISIS together.”

Earlier this month the U.S. decided to send an extra 3,000 troops to the region.

“We’re not leaving unless they pay us back for it…If they do ask us to leave, if we don’t do it in a very friendly basis, we will charge them sanctions like they’ve never seen before ever,” he said.

U.S.-led sanctions on Iraq in the 1990s are thought to have killed over one million people, including over half a million young children. Successive U.N. diplomats in charge of Iraq during the sanctions denounced them as genocide against its people. Trump said his sanctions would make the ones on Iran look tame by comparison.

“If there’s any hostility,” he said, “we are going to put sanctions on Iraq, very big sanctions.” Trump also threatened to commit genocide against the people of Iran, destroying their cultural heritage sites in a move condemned by many and compared to the Taliban’s destruction of the world-renowned Buddhas of Bamyan in Afghanistan.

Despite the president’s threats, enormous numbers of Iraqis heeded Shia cleric Muqtada al-Sadr’s call for a “million man march” in Baghdad last week. While Time magazine claimed there were only “hundreds” in attendance, drone footage told a very different story. Some estimates put the total at over 2.5 million. And despite Bloomberg Quick Take originally claiming that they were “anti-government demonstrations,” the huge banner on the main stage reading “GET OUT AMERICA” in uppercase English letters suggested otherwise.

Sadr asked for it. Today’s the day. Baghdad now#Iraqmillionmanmarch #Iraq 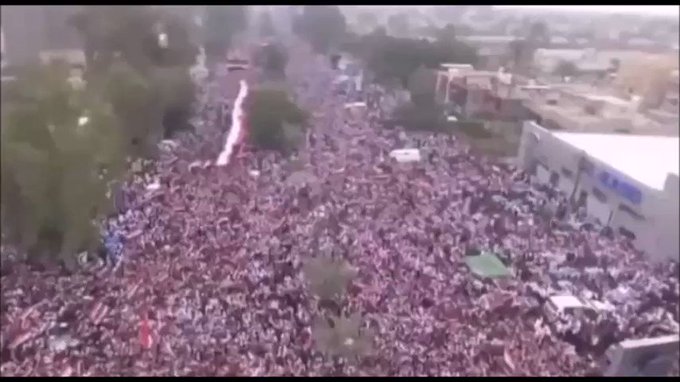 197 people are talking about this

Hostilities between the United States and Iran threatened to spiral out of control after the January 3 assassination of Iranian General Qassem Soleimani. Soleimani had been invited to Baghdad by Iraqi Prime Minister Adil Abdul-Mahdi for regional peace talks. Abdul-Mahdi asked Trump for permission for Soleimani to enter Iraq. Trump accepted, then used the opportunity to kill the general with a drone strike, something the Iraqi parliament declared a violation of their national sovereignty. In retaliation, the Iranians fired ballistic missiles at U.S.-occupied bases in Iraq, causing pinpoint damage, but no fatalities, as the U.S. was warned of the impending response. The Pentagon has said that dozens of troops have suffered brain injuries as a result, but the president disagrees, claiming they amount to little more than headaches. The plan to build new bases will be seen in Iran as an attempt to tighten the noose around it more tightly. There are already over 65,000 American military personnel in neighboring countries. The U.S. continues to occupy Iraq and Afghanistan since the invasions launched in the wake of the 2001 World Trade Center attacks.

Since 2003, an estimated 2.4 million people have been killed in the U.S. war on Iraq. One of the consequences of the wars in the Middle East was the rise of the Islamic State, which itself has led to further conflict. The U.S. military also operates from a network of bases in Bahrain, Qatar, the United Arab Emirates and many other states in the region.

The move to establish three new U.S. military bases on Iran’s borders will not be a welcome move to those who wish to deescalate tensions, least of all by the Bulletin of Atomic Scientists, who moved their Doomsday Clock to just 100 seconds to midnight, citing a possible regional nuclear catastrophe as a factor.

Alan MacLeod is a Staff Writer for MintPress News. After completing his PhD in 2017 he published two books: Bad News From Venezuela: Twenty Years of Fake News and Misreporting and Propaganda in the Information Age: Still Manufacturing Consent. He has also contributed to Fairness and Accuracy in Reporting, The Guardian, Salon, The Grayzone, Jacobin Magazine, Common Dreams the American Herald Tribune and The Canary.

Featured image: Protesters take to the streets of the Iraqi capital, Baghdad, for a million-man rally to call for an end to the military presence of the United States in their country. Photo | Mehr