In the period from 1820 to the Civil War the great profits which the New England factory owners accrued were dependent upon the fact that the owners paid women half of men’s wages, though they worked as hard and as long as men. But the super-profits the factory owners amassed were based upon slave labor in the South. The raw material, cotton, which the Northern manufacturers depended upon, was very cheap, owing to the    exploitation and oppression under which unwaged enslaved people labored.

Factory owners did not want slave labor in their mills. Millworkers bought everything they needed, and could not grow or make their own goods as they had done when they were on the farm. So, the Northern industrialists and merchants, boardinghouse owners and farmers did not want a workforce that had no money.

They wanted workers to plough their wages back into the purchase of   commodities. They wanted the workers to send money home as remittances so the families that workers left “back on the farm” could pay off their mortgages or debts for new equipment or land.   Farmers and businessmen and bankers depended upon the cash nexus which enhanced their enterprises.  Slavery in the North would cut into profitability.

The textile and other industries expanded Southern slavery.

The wars enabled the extension of slavery and the growth of Cotton Kingdom. Conditions for the enslaved people deteriorated as the slavocracy doubled their land holdings and political power. The internal slave trade grew to provide more hands for the new cotton fields in the South and West, separating people from their loved ones, increasing the “breeding” of children for human trafficking  to distant plantations..

Conditions and wages for industrial workers were also worsening as the mill owners’ profits were growing.  Slave holders were enriching themselves too, thanks to the US industrial revolution in textiles, and Britain’s increasing demand for US cotton.

By the middle of the 19thcentury, the development of steamships, railroads and other infrastructure, called “Internal Improvements,” sent raw cotton and then textiles everywhere, to the North, West, and overseas. Cotton calico was durable and its tight patterns hid stains, so millions of farm and industrial women workers bought it and made their dresses from it.

The new products of US industry were protected by tariffs hotly debated in Congress. Tariffs were always favorable to the manufacturers. The purpose of tariffs, taxes on goods coming into a country, was to make foreign goods more expensive than US-made ones.  These tariffs appeared to be the basis of the conflict between the ruling classes of the North and the South. Tariffs angered the leaders of the South where industrial development was rare, and many Congressional debates centered around them. The Southern planter class was angry that tariffs raised the prices of imported manufactured goods forcing Southern planters to buy the less-expensive Northern industrial goods like cloth and tools.

The Political Economy of Slavery vs: Pre-Industrial Capitalism

If the ruling class in the South, the “Slavocracy,” had industrialized their region, they would have had their own manufactured goods, but that was impossible. The plantation system prevented the Southern ruling class from having enough available “liquid” capital to industrialize.   It was the slave system itselfthat made the South dependent on Britain or the North for manufactured goods.   Southern senators several times threatened to secede from the Union over tariffs. But their antiquated economic system was the cause of their problems.

Beyond Twelve Years A Slave: What the United States Owes Black America

It began to be clear to Northerners that slave labor in a growing capitalist economy was an anachronism. Neither enslaved people nor poor whites in the South could afford to buy any industrially-produced commodities. The South was economically a dead zone, where little commerce or industry could succeed, while the North was economically advancing both industrially and agriculturally, and expanding its infrastructure to advance commerce. Its population was larger and bought the new commodities the factory workers produced.

New farm machinery and scientific agronomy were intensifying agricultural production in the Northeast and the Middle West.  New York, Pennsylvania and Ohio, the “breadbasket” Middle States, produced grains on large estates and family farms.  Northern industrialists and Northern farmers began to see that Southern slavery as unhelpful to their financial advancement. They could not sell much to the South. The South was agriculturally self-sufficient, consuming their own grains, greens, and hogs.  The industrialists could not make a profit from a region of the US where abject poverty ruled. When the depressions- the Panics of 1837, the economic downturn of the 1840s, and the Panic of 1857 hit, the South was slow to recover.

The North was dominated by businessmen, and in the North, working classes bought cloth and bonnets, shoes and books, while Northern farmers bought the new improved farm equipment, clocks, tools or calico or anything being produced in those Northern factories. Free workers and free-soil farmers’ cash could pay for these commodities.  In the South, only the Planter class was wealthy, and they bought mostly luxuries for themselves, and cheap tools for the enslaved to use.The enslaved people, always managed to “lose” or break these tools, and that was a mark of ongoing resistance to slavery throughout the South. 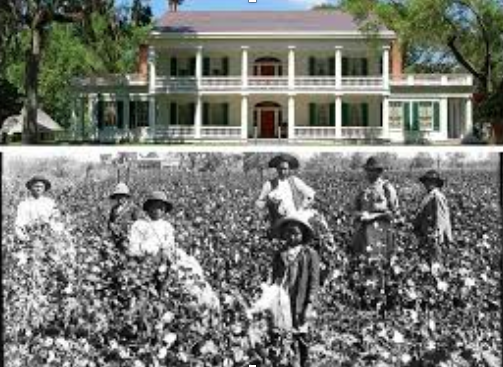 Northern capitalists and British bankers or textile industries essentially controlled the Southern economy.  Planters were usually in debt to Northern or British bankers.   In what historian Eugene Genovese described as thePolitical Economy of Slavery[1], amongst Southern ruling class, capital was “frozen.” Their actual money was sunk in buying and maintaining their enslaved Black people, buying luxuries, paying back debts, and buying new land to expand the Cotton Kingdom. Plantation land was literally used up by cotton farming, and the soil was useless after a few seasons. They did not teach the enslaved people modern methods of soil improvement because they did not teach enslaved people anything that might enhance their knowledge and lead to escape.

Wars against the Indigenous for the extension of slavery

The Planters got land when the US government passed laws to remove “Indians.” And with every military incursion against the indigenous, they took the fertile acres the government acquired for them for the expansion of the Cotton Kingdom.

This planter class was responsible for promoting every ante-bellum US war:  The War of 1812, the Seminole Wars in Florida(1817–18, 1835–42, 1855–58), and the Mexican War (1846-48).  US always claimed they were under attack by “Savage Indians.” The US Army made wars for the Slavocracy, and justified US colonization and white settlement of the continent as advancements for “civilization.”

Slavery, the system, was connected to everything in the United States. The US army killed Indigenous People to enlarge the Cotton Kingdom.  Laws were created to expand it. Indigenous were exiled from their homelands to enrich the Slavocracy.  Andrew Jackson even flouted a Supreme Court ruling, Worcester v. Georgia, which said that the 1830 Indian Removal Act by which the US army forcibly removed over 100,000 indigenous peoples from their lands, was unconstitutional. Jackson’s refusal to abide by the Court’s decision produced the Trail of Tears, the ethnic cleansing the South of the major Indigenous nations of the region, causing the deaths of 4000 Cherokee, 8000 Muscogee (Creek), 500 Seminole, 500 Chickasaw, and 2000 Choctaw people. Over 15,000 indigenous people died on these death marches.  Those surviving faced forced migration to Oklahoma, so Southern planters could grab land for the expansion of slavery and the cotton kingdom. [2]

This was how the Constitution worked.   The army worked for the slavocracy to invade and seize territory. The Slavocracy ran the government. They got what they wanted, except for the tariff laws.

Transportation advancements, and Internal Improvements -like New York’s Erie Canal and railroads – transported the commodities enslaved Africans produced, as well as the goods and crops Northern farmers and industrial workers made.  Steamships enabled the growth of coastal and internal river commerce, including the internal slave trade, and carried people away from their loved ones forever. By the 1850s, hundreds of thousands of enslaved people were routinely torn from their families and moved South and West by railroad.

“While the cars were at the depot, a large crowd of white people gathered, and were laughing and talking about the prospect of negro traffic; but when the cars began to start and the conductor cried out, ‘All who are going on this train must get on board without delay,’ the colored people cried out with one voice as though the heavens and earth were coming together, and it was so pitiful, that those hard hearted white men who had been accustomed to driving slaves all their lives, shed tears like children. As the cars moved away, we heard the weeping and wailing from the slaves as far as human voice could be heard; and from that time to the present I have neither seen nor heard from my two sisters, nor any of those who left Clarkson depot on that memorable day.”

My Life in the South, by Jacob Stroyer.[3]

[1] Eugene D. Genovese, The Political Economy of Slavery: Studies in the Economy and Society of the Slave South,

Featured image is from https://unzippingthepast.weebly.com