If this memo is authentic, CBP has been caught in a lie.

Last month, U.S. Customs and Border Protection adamantlydenied that it was detaining U.S. citizens and legal permanent residents of Iranian descent and interrogating them about their religion and political views. The agency also assured the public that it had not issued any directive related to the detentions and interrogations.

There was already strong reason to question CBP’s denials, given the mounting and consistent reports that border officers were, in fact, targeting travelers of Iranian heritage returning to Washington state from Canada. Now, we have even more reason to think CBP lied.

Last Thursday, a local Washington paper published a leaked CBP directive, which appears to have originated with CBP’s Seattle Field Office. Sure enough, the directive instructs officers to target and detain travelers based on their national origin and to interrogate them about their religious background and beliefs. 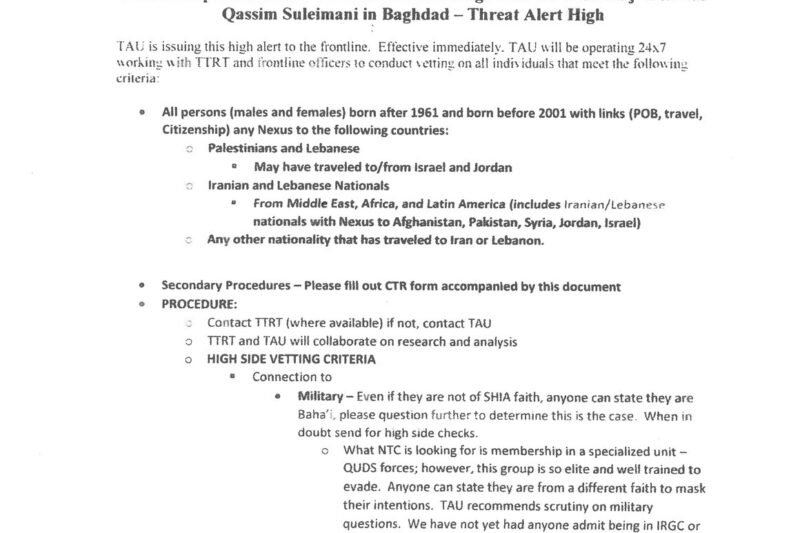 If this directive is authentic, CBP has been caught in a lie — one that concealed troubling and abusive treatment of travelers who hadn’t done anything wrong.

The directive is a damning document. It makes clear that CBP officers are to target and detain travelers whose national origin or citizenship is Iranian, Lebanese, or Palestinian. It also explicitly instructs officers to interrogate these travelers on their religious affiliation and beliefs, specifically making references to Muslims of the Shia sect.

To be clear, the government has the authority to question travelers to verify their identity, citizenship, or legal status, and to conduct reasonable searches for contraband. The government cannot, however, select travelers for further questioning based on their national origin. And questioning travelers about their political views, associations with others, or religious beliefs and practices can infringe on rights guaranteed by the Constitution and federal law, which we do not surrender at the border.

This kind of biased targeting is nakedly discriminatory. It wrongly renders whole classes of people inherently suspect simply by virtue of who their parents are, where they were born, or what religion they practice. It is also, in many ways, an extension of the Muslim ban — which affects a large number of Iranians — and the Trump administration’s stereotyping, unjust profiling, and targeting of Muslims more broadly.

This targeting is also incredibly demeaning and stigmatizing to the people who experience it. One mother who was detained in Washington state by CBP in early January couldn’t bring herself to explain to her two young children what was happening during their detention. Instead, she went outside the facility to cry so they wouldn’t see her break down. Others — including U.S. citizens and lawful permanent residents — lamented that even if they are born in the United States or have lived here for decades, they’re still being treated as outsiders.

The reported CBP directive also puts the agency’s downright bigotry and ignorance on full display. The directive states that CBP is looking for people with connections to the military or Iran’s specialized Quds Forces, and then draws a broad and vague connection to the Shia sect of Islam. But there are between 160 and 210 million Shia Muslims worldwide, and approximately 93% of Iran’s population is Shia, so the connection CBP is drawing is based on nothing but bias.

CBP goes on to warn in the directive that “anyone can state they are from a different faith to mask their intentions.” But one’s faith — whether it is Islam, Christianity, Judaism, or any other religion — says nothing relevant about one’s “intentions,” whatever that means. That is why this kind of broad-brush targeting, in addition to being wrong and unfair, is a colossal waste of time and taxpayer resources.

Compounding these concerns, the directive instructs CBP’s highly secretive teams, dubbed Tactical Terrorism Response Teams, or “TTRTs,” to vet travelers of Iranian, Lebanese, or Palestinian heritage. According to public statements by CBP officials, these secret teams already have a troubling record of harassing innocent travelers, and the officers who comprise them may rely on their “instincts” to target travelers who the government has never identified as posing a security risk. We’re currently suing CBP over the secrecy shrouding these teams.

The leaked directive continues a broader pattern of CBP misconduct that ranges from humiliating and harassing to cruel, inhumane, and lawless. CBP treats the border as a massive dragnet for vacuuming up intelligence on anyone who crosses it — a gross distortion of CBP’s actual authority. And this is not the first time CBP has lied or misled the public to conceal its misdeeds. CBP officers have written fake court datesto send asylum seekers back to Mexico and distorted statistics to mislead the public about realities at the U.S.-Mexico border.

We will continue to hold CBP accountable and demand that Congress investigate CBP abuses. In the meantime, it is critical for all travelers — U.S. citizens, legal residents, and visitors — to know and assert their rights when crossing the border.

The original source of this article is ACLU
Copyright © Scarlet Kim and Hugh Handeyside, ACLU, 2020
https://www.globalresearch.ca/cbp-lied-about-iranian-american-detentions-leaked-memo-suggests/5703043