MEK is considered by Trump as Iran’s ‘government in exile’

The United States continues to support the Mujahedeen-e Khalk (MEK), despite the fact that that terrorist organization is losing popularity, not that it ever had very much anyway, around the world. The group remains basically based in Albania, a nation that allowed about 4,000 of its members into the country at the insistence of the U.S. government. As Dr. Olsi Jazexhi has stated, “The Americans imposed them (MEK) on Albania and since Albania is a very fragile state, they had to accept”.

But what of other nations? The MEK’s foothold in Spain was lost when it supported the far-right VOX party. It has been barred from rallying in Germany, and France forbid its annual Villepinte rally. MEK members have lost access to European Union Parliament members.

Even the mighty U.S. has officially cooled its rabid support for the anti-Iran terrorist group. Following the assassination of General Qassam Soleimani by the U.S. in January, the murderous U.S. Secretary of State, Mike Pompeo, ordered diplomats at all U.S. missions not to have contact with ‘Iranian opposition groups’.

Regardless of Pompeo’s statement, the group continues to have high-profile U.S. supporters, including former U.S. National Security Advisor John Bolton, who famously proclaimed in 2017 that the MEK and its minions would be celebrating in the streets of Tehran before the fortieth anniversary of the Iranian Revolution in February 2019. That anniversary, and yet another, came and went without any MEK celebrations anywhere in Iran, let alone in the nation’s capital. 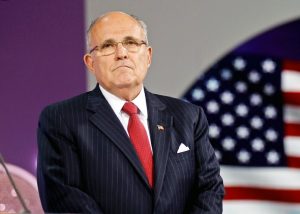 Another famous and infamous U.S. citizen, former New York City mayor Rudy Giuliani, personal attorney to U.S. President Donald Trump, calls the MEK a ‘government in exile’.  Apparently, Giuliani has lost the ability to discern truth from falsehood, fantasy from reality; this is not surprising, considering who employs him. All reputable polls of Iranians, in Iran and around the world, do not support his bizarre assumption that Iranians support the MEK; on the contrary, overwhelming evidence indicates that they oppose the MEK’s goals and tactics.

And to call the MEK a ‘government in exile’ is ludicrous. Consisting of a few thousand aging anti-Iran terrorists, and perhaps a limited number of younger recruits, the organization is not seen as a ‘government in exile’ by anyone but the delusional Giuliani. He also made this amazing statement: the MEK is “…a group that should make us comfortable with regime change.” This statement is incredible in a variety of ways: 1) the U.S. should not be in the business of overthrowing governments (e.g. ‘regime change); 2) who is the ‘us’ that Giuliani says should be comfortable with the MEK as a potential governing body in Iran? Certainly not the Iranians; 3) this is a group that, until 2012, the U.S. designated as a terrorist organization. It is responsible for the deaths of at least 12,000 Iranians. So is Giuliani saying that he would be ‘comfortable’ with a nation of 81,000,000 people run by terrorists? Perhaps so, since he himself works for the head of the largest terrorist organization in the world.

With diminishing support in Europe, and even the U.S. putting the official breaks on contact with the MEK, how does it stay afloat? NBC News reported that it is likely that the MEK id financed by Israeli intelligence. That would make sense, since Israel, like the U.S., is a brutal, repressive regime, in violation of countless international laws, and forever violating the rights of the Palestinians in the most unspeakable ways. And since the U.S. supports Israel with $4 billion annually, one can be confident that some of that money is finding its way to the MEK.

So with fading support, and funding probably coming from Israel, and thus, at least indirectly, from the U.S., what is the MEK to do? Hapless Albania must continue to house them, against the wishes of Albanians, but their leaders are in a U.S. chokehold, so they don’t have much choice. The U.S. wants the MEK nearby in case it needs their terrorism for some reason; the U.S. is not averse to having some other country do its dirty work: witness the U.S.-financed Saudi slaughter of Yemenis, as just one example. And should the Albanian government decide to act as its people want, rather than as the U.S. demands, would the MEK then turn its terrorism on them? Albania has certainly been put between a rock and a hard place by the U.S., which doesn’t care in the least about it or the Albanian people; the whole nation is just a pawn in an international chess game that the U.S. is playing, that no one else is interested in.

The Iranian Revolution, which overthrew the U.S. installed and supported Shah, just celebrated its forty-first anniversary, despite all the efforts of the U.S. to defeat it. One must remember that the democratically-elected government of Iranian Prime Minister Mohammed Mosaddegh was overthrown by the U.S. government in 1953, and then the Iranian people had to endure twenty-six years of oppression and torture under the U.S. puppet who did exactly what he was told by the U.S.; his repression of the Iranian people was unimportant to the U.S. government. It is unlikely that such an overthrow, if attempted, would be successful again. So instead of direct overthrow, the U.S. attempts to harm the people through sanctions, expecting them to rise up, overthrow the government, and usher in the MEK to repress the people and do the U.S.’s bidding. This is the fantasy that Giuliani, Bolton, Trump, Pompeo and their cohorts dream about, but as has been mentioned, reality and the Trump Administration barely have a nodding acquaintance with each other.

The original source of this article is pd
Copyright © Robert Fantina, pd, 2020
https://www.globalresearch.ca/united-states-mek/5703958