By our correspondents
29 February 2020

More than 200,000 public school teachers and principals across Sri Lanka held a one-day strike on Wednesday to demand a resolution to long-standing salary issues, improved working conditions and an end to government attacks on free education.

Part of the teachers protest march

At a February 14 protest rally in Colombo, teacher union officials demagogically promised to call indefinite strike action but instead limited Wednesday’s walkout to a one-day sick-leave campaign. Tied to the capitalist state, the unions are hostile to any mobilisation of teachers or other workers in a political struggle against the government.

Wednesday’s strike was the largest industrial action in Sri Lanka since President Gotabhaya Rajapakse came to power in November and indicates seething opposition to the ongoing social attacks on workers by consecutive Sri Lankan governments. Over the last three months, strikes have erupted in the plantations and at the state-owned Kahatagaha mine. Over 15,000 workers sacked by the Rajapakse government are also maintaining an ongoing protest in Colombo near the Presidential Secretariat to demand reinstatement.

The political establishment has responded to the strikes by promoting Sinhala chauvinism against Tamils and Muslims in an attempt to divide workers. Running parallel with this communalist propaganda, the Tamil parties have stepped up their nationalist rhetoric.

Despite this, about 90 percent of public school teachers across the ethnic divide actively participated in Wednesday’s stoppage. Almost all public schools in the war-ravaged North and East, the central plantation districts and other parts in the country were shut down. About 3,000 teachers from all districts of the island held a protest march and rally outside the education ministry in Colombo.

Hundreds of police officers armed with tear gas, batons and water cannon were mobilised ready to attack the protesting educators. Police manhandled teachers when they attempted to remove barriers blocking the entrance to the education ministry. In Jaffna, the northern provincial capital, hundreds of teachers protested and in Vavuniya students and parents joined the teachers’ demonstrations. 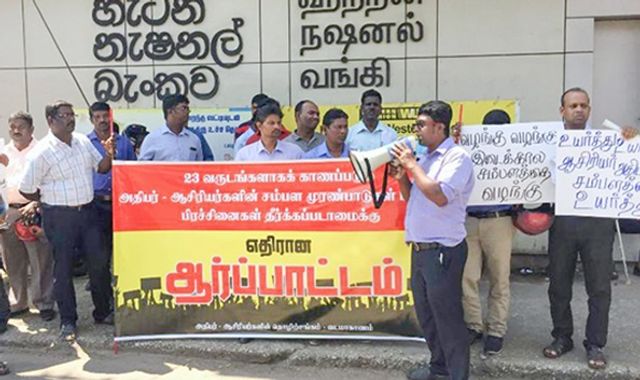 The teachers’ struggle in Sri Lanka is part of an international resurgence of the working class. Hundreds of thousands of teachers in the US, Canada, France, Poland, Argentina and India have taken strike action since 2018 in defence of free education and for decent wages and living conditions.

Last year, Sri Lankan teachers conducted a series of struggles, including a two-day strike in September. The teacher unions, however, called off the scheduled five-day strike in September after two days, accepting a bogus promise by the previous government that it would pay an interim allowance, starting in January this year.

The unions did everything to sabotage this week’s industrial action and doing nothing to mobilise teachers. In some schools the unions did not even inform teachers about the walkout and protest. While a majority of educators in Sri Lanka do not belong to the unions out of disgust with their betrayals, many teachers participated in Wednesday’s walkout.

Previous demands also included and increase in government spending on public education to 6 percent of gross domestic product, restoration of the 2016 pensions scheme and an end to ongoing increases in non-teaching duties.

Desperate to avoid any confrontation with the government, the union alliance abandoned these and several other demands, limiting Wednesday’s strike to an appeal to the government to pay the previously promised interim allowance.

When the Rajapakse government came to power, the new education minister, Dulles Alahapperuma, initially promised to pay the allowance but then backtracked. On Wednesday, he told the media that although the government supported payment of the interim allowance, teachers would have to wait until the next government is formed and a new budget presented.

President Rajapakse is planning to dissolve parliament next week and hold a new general election. He hopes that the Sri Lanka Podujana Peramuna (SLPP), which is led by his brother Prime Minister Mahinda Rajapakse, will win a two-thirds parliamentary majority. The cash-strapped Rajapakse regime is determined to impose the burden of the country’s deepening economic crisis on Sri Lankan workers and the rural masses. Addressing the protesting teachers on Wednesday, CTSU secretary Mahinda Jayasinghe repeatedly declared that the trade unions had “never betrayed” any teachers’ struggles. Another nervous union bureaucrat demagogically declared, that the unions would no longer be a “messenger” for the education minister’s “bogus promises.”

Hostile to the union leadership, some protesters shouted, “Enough of talks, what’s the next action?” A group of teachers also rushed to the education ministry gate shouting: “We need a final answer. We can’t go back without solution. We’re tired of bogus talks. Let’s move for an indefinite strike.”

CTU leader Joseph Stalin claimed that although an education ministry official had been sent for talks, “We are not ready for a discussion and will call a five-day strike from the 23rd of next month.”

Many teachers disbelieved Stalin’s claims, shouting “It’s too late.” Several called out that they were “ready to strike, starting tomorrow.” Sensing that things could get out of control, the union leaders quickly called off the protest but many protesters did not leave the area.

When one teacher questioned union officials and demanded to know why they were delaying the strike for a month, CTSU secretary Jayasinghe rushed towards him, declaring, “We take this decision with the agreement of all the trade unions. If you don’t agree with that then leave the union.”

Jayasinghe’s threatening response exposes the anti-democratic nature of the unions. In a face-saving move, teacher union officials then declared that they would call a strike on March 16.

A despicable role is also being played by the Joint Teacher Services Union (JTSU), which is led by the fake-left Frontline Socialist Party. It held a separate protest stunt involving about 100 of its members in the same area prior to the CTU and CTSU mobilisation. The JTSU protesters attempted to enter the ministry premises but were blocked by the police. 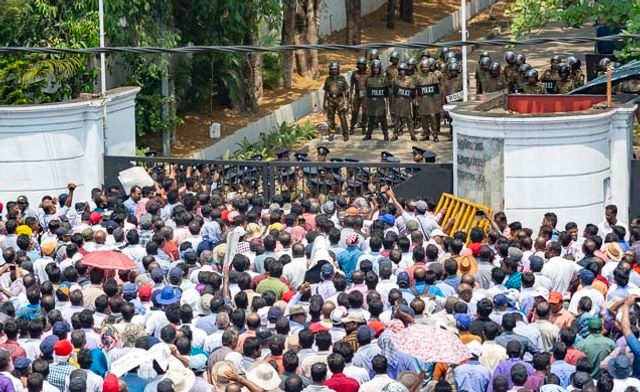 The JTSU bureaucrats criticise the other teacher unions for accepting the previous government’s interim allowance and the education department’s moves to turn the sector into a “closed service.” However, the organisation presents no genuine alternative and insist that more protests will force the government to grant teachers’ demands.

The Teachers Group of the Socialist Equality Party (SEP) issued a statement and campaigned among teachers during Wednesday’s protest. The statement pointed out that militant action was insufficient and that teachers needed a political program based on a socialist perspective to win their demands.

The SEP teachers’ group statement said: “There is a firm determination among teachers to fight for the right to free education, adequate wages and the facilities needed to provide a quality education for students.

“Mere determination, however, is not enough. It is essential to clearly identify the real challenges facing teachers, to develop a strategy to overcome them, and to build up new organisational forms in order to carry out that strategy.

The Rajapakse government, the statement warned, was planning to cut the budget deficit by half this year and had already started to gut free education and slash healthcare, jobs and wages.

The statement explained that the “fundamental barrier” confronting teachers was the reactionary role being played by the trade unions. It pointed out that the deepening economic crisis of Sri Lankan capitalism was part of the global crisis of capitalism crisis.

The SEP teachers’ group statement called on teachers to break from the unions, which are tied to the capitalist system, and build independent action committees to rally the support of all teachers, as well as parents and students, in unity with other workers in Sri Lanka and internationally in the fight for a socialist program.