Turkey Asks NATO to Join Its War Against Syria and Russia

Turkey Asks NATO to Join Its War Against Syria and Russia 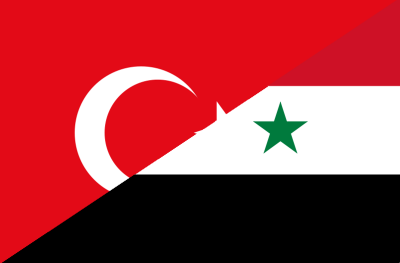 The spokesperson for the Islamist party of Turkey’s President Tayyip Erdogan has called upon all of NATO to go to war against Syria for Syria’s having killed dozens of Turkey’s troops in order for Syria to defeat Turkey’s invasion and military occupation of Syria’s Idlib Province, which borders on Turkey. Going to war against Syria would mean going to war also against Russia, which is in Syria to protect Syria’s sovereignty over its own territory.

If the United States accepts that Turkish proposal, this could lead to World War III.

Darius Shahtahmasebi reported for Russia’s RT News on the morning of February 28th,

Turkey is calling for NATO’s protection after 33 of its soldiers were killed in an apparent Syrian airstrike in Idlib, allegedly while fighting in terrorist ranks. In the regional chaos that ensues, only one player stands to gain.

Speculation over what’s to come next has seen #article 5 trending on Twitter in the hours following the attacks, after Omer Celik, spokesman for Turkey’s ruling AKP party, indicated to reporters in Ankara that he was looking at requesting formal NATO protection against Damascus and, by proxy, the Russian air force.

“We call on NATO to [start] consultations. This is not [an attack] on Turkey only, it is an attack on the international community. A common reaction is needed. The attack was also against NATO,” Celik told Turkish media.

The US State Department also condemned the attack, stating that it stands by its “NATO ally Turkey.” It further stated that it continues to “call for an immediate end to this despicable offensive by the Assad regime, Russia and Iranian-backed forces.” Never one to let us down, the US envoy to NATO Kay Bailey Hutchinson also told journalists that “everything is on the table.”

This is the opportunity for U.S. President Donald Trump to join his opposition, Democratic Party’s, and even his own Party’s, hate-Russia campaign, “by unleashing World War III, if he wants to”. (For example, it was a unified Congress, both Parties, that forced him, on 17 July 2018, to reverse himself and say that Russia had assisted in his having become the U.S. President. He needed to be forced in order to say he agreed with that statement.)

“Turkey’s presidential spokesman on Friday called on the international community to take measures to de-escalate tensions in Syria after dozens of Turkish soldiers were martyred in a late night attack by the regime forces.”

No mention was made, about those ‘martyrs’, that this had occurred in Syrian territory, where Turkish forces were invaders and military occupiers, and that the ‘regime’ they referred to is Syria’s committedly and ideologically secular, non-sectarian, Government, which is the only internationally recognized Government that Syria has (but from which Islamist Turkey is now trying to seize Syria’s Idlib Province and to include it within Turkey’s own territory).

By 7PM Turkish time on Friday the 28th, Firat Kozok of Bloomberg News headlined “Turkey Says It Has No Choice But to ‘Loosen’ Stance on Refugees” and reported that

Turkey is pressed by developments in Syria’s Idlib and has no choice but to “loosen” its policy of preventing refugees from travelling on to Europe, President Recep Tayyip Erdogan’s communications director Fahrettin Altun told reporters in Ankara.

“If Idlib falls, then millions of Syrian refugees will try to escape to Turkey and Europe. Turkey no longer has the possibility to provide resources for and help these people,” Altun said.

This is applying pressure upon the European member-nations in NATO to either join Turkey’s now very hot war against both Syria and Russia, or else to become faced with Turkey’s release of the tens of thousands of ‘rebels’ (mainly jihadists) whom Turkish forces in Syria’s Idlib Province have been protecting against military fire from Syria’s Army and from Russia’s Air Force.

On February 28th, the German Government news-agency Deutsche Welle (DW) bannered “Idlib: ‘I’d rather suffer bombs than Assad’” and provided an extensive interview by telephone with someone in Idlib who says that she supports democracy and tolerance of all religions and is determined to overthrow the present Government of Syria. If her pro-democracy, anti-jihadist, allegations are honest, then she is an extraordinary exception for Idlib, as has been documented by the periodic polls that the British polling firm Orb International took throughout Syria and reported during 2014, 2015, 2016, and 2018. For examples:

In the 2014 report (page 12) only 4% of the people sampled in Idlib said that they supported “The Assad Government.” This was far lower than the percentages in any other Syrian province. 52% supported either “armed opposition” or “Violent religious extremist groups.” This was far higher than in any other province except ISIS-controlled Raqqah, where it was 59%.

In the 2015 report (page 7), 35% of the people sampled in Idlib said that al-Nusra (al-Qaeda in Syria) was a “Completely positive influence”; an additional 35% said it was a “Somewhat positive influence.” That 70% support for al-Qaeda was by far the highest found in any of Syria’s provinces.

If the person who was at the other end of that DW phone-call was authentic, then she was anything but representative of the people in Idlib.

At around 10 AM Eastern time in the U.S. on the 28th, Turkey’s Daily Sabah newspaper headlined “Erdoğan and Putin may meet next week, Kremlin says”, and reported that “Erdoğan and Putin spoke over the phone Friday to try to defuse tensions that rose significantly in northwestern Syria after 33 Turkish troops were killed in a Syrian regime airstrike.” Either Erdogan is trying to find a face-saving way out of his huge gamble, or Putin is trying to prevent WW III, or both. An hour later, that newspaper bannered “Turkey determined to remove Assad regime from Syria’s Idlib, Erdoğan tells Trump.” Why is it that a country can proudly proclaim in a headline that it will commit international aggression in blatant violation of international law and yet not be roundly damned by the publics in all countries for doing such a vile thing?

At around noon, U.S. Eastern time, on the 28th, Turkey’s TRT World bannered “NATO and the West’s dereliction of duty in Syria and Turkey” and opened: “If the West and NATO continue on the path they have chosen, it will allow Vladimir Putin to reshape the post-Soviet world order in his image.” After trying to scare Europe’s leaders by threatening to overwhelm them with maybe hundreds of thousands of released jihadists who have been basically penned-up in Idlib, Erdogan was trying to appeal to those leaders’ obligations to NATO, America’s anti-Russian military alliance.

At around 1:30 PM U.S. Eastern time on the 28th, Britain’s Guardian headlined “Nato expresses ‘full solidarity’ with Turkey over Syria airstrikes”but NATO chief “Stoltenberg offered no immediate promise of assistance to Turkey,” and the article went on to report that the UK and five of its allies would bring the matter to the U.N. Security Council on Friday night (where Turkey’s demands would even more certainly go nowhere). The reality of Stoltenberg’s statement (which had been issued at 12:33 Eastern time) was a total humiliation to Erdogan’s fantasies that because of his country’s NATO membership he could get the U.S. to invade Russia. Stoltenberg gave the standard NATO hate-talk against Russia and its allies, however, saying that “Allies condemn the continued indiscriminate air strikes by the Syrian regime and its backer Russia in Idlib province.” Even when a NATO member engages in clear-cut foreign aggression in violation of the U.N. Charter’s prohibiton against that, and explicitly violating the International Criminal Court’s “Crime of Aggression”, NATO will spew its standard hate-propaganda against the countries that were and are victims of that blatantly illegal aggression by the NATO member-country. Notwithstanding NATO’s sometimes diplomatic language, it is — after Russia ended its side of the Cold War in 1991 — basically an extremely dangerous militarized hate-organization, of which every one of its member-nations should be profoundly embarrassed to belong.

Investigative historian Eric Zuesse is the author, most recently, of  They’re Not Even Close: The Democratic vs. Republican Economic Records, 1910-2010, and ofCHRIST’S VENTRILOQUISTS: The Event that Created Christianity.