Court Trial in The Hague: Is Malaysia’s Position on MH17 Tragedy Shifting?

A long-awaited court trial of four suspects implicated in the July 2014 downing of Malaysia Airlines Flight MH17 began today (March 9) at The Hague in the Netherlands.

Three Russian nationals and one Ukrainian have been indicted for the murder of all 298 passengers aboard the ill-fated flight, which was shot down over eastern Ukraine more than five years ago.

“This is a significant milestone toward finding the truth and establishing justice for the victims of the flight MH17 tragedy,” read a March 7 statement issued by Malaysia’s Ministry of Foreign Affairs.

“For justice to prevail,” the statement said, will require a “credible and transparent process based on the rule of law.” 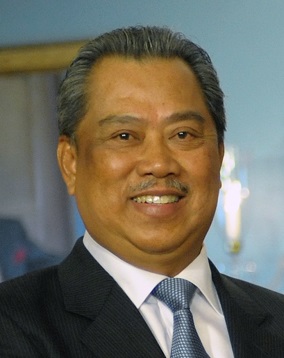 The statement is one of the first issued by Malaysia since Prime Minister Muhyiddin Yassin (image on the right) was sworn-in on March 1, and signals a distinct new tone from outgoing premier Mahathir Mohamad’s outlier position on the proceedings.

During his nearly two-year tenure, Mahathir alleged that the Dutch-led Joint Investigation Team (JIT) leading a probe into the disaster had been biased and politicized against Russia.

Though economic ties between Moscow and Putrajaya are modest, the two countries forged closer strategic links during Mahathir’s first and second premierships.

Malaysia’s perceived closeness to Russia, according to various Malaysian officials and reports, led to the Southeast Asian nation being stonewalled as the MH17 investigation unfolded.

While Muhyiddin’s days-old premiership is still taking shape, observers are closely watching whether or not his administration will echo past skepticism of the multinational probe.

Though Mahathir’s government did not oppose a trial, as a small number of civil society groups in Malaysia did, he claimed that evidence against the four accused was lacking and amounted to “hearsay.”

The then-premier’s remarks sparked diplomatic controversy and upset many of the victims’ next-of-kin. Mahathir’s positions, however, continue to be shared by some Malaysian officials who dealt firsthand with the disaster.

Fauziah Mohd Taib, Malaysia’s Ambassador to the Netherlands when the MH17 plane was shot down, is among them.

“From the beginning, I sensed it already. They were trying to keep me away, trying to keep Malaysia away [from the investigation],” the 64-year-old ex-diplomat said in an interview with Asia Times.

The retired envoy claimed that mutual distrust among countries in the JIT led to Malaysia being initially sidelined from the probe.

While Malaysia is part of the multinational JIT, along with Australia, Belgium, the Netherlands and Ukraine, the grouping’s investigation began without its participation, a sore point that influenced Mahathir’s stance.

As owner of the fallen aircraft, Malaysia was entitled to appoint observers to the probe and be briefed on its findings, according to International Civil Aviation Organization (ICAO) protocols.

But it was only invited to join the criminal probe as an equal member in late November 2014, over four months after MH17 was brought down on July 17.

Fauziah, however, said her country’s prosecutorial representative was only allowed to attend meetings related to the criminal probe in March 2015.

“This is our airplane, our people were also there, all the crew members were Malaysian. Why are we not in the investigation? I found the Dutch to be pulling back when we talk about it,” she said.

“We wanted to join in the JIT from the beginning. We could join the Dutch Safety Board (DSB) daily briefings, which I attended,” she said in reference to the board’s civilian investigation tasked with determining the cause of the crash.

Malaysia, she said, was initially kept out of legal deliberations to apportion blame and criminal charges against suspects.

“They only wanted people from the prosecutor’s office. So, if you are not a lawyer, not a prosecutor, you cannot come in. Even then, there was no official invitation for us. There was no clearance, yet we insisted on being equal partners,” she said.

The veteran diplomat claimed Malaysia’s cordial ties with Russia were cause for it to be isolated from the process.

“I received some information from my colleagues in the Netherlands that it was Ukraine who didn’t want us in because they think we are quite inclined to Russia,” Fauziah said. “But we never made any statement to say that we are pro-Russia or anti-Ukraine. There were no statements, official statements or even implied statements.”

In 2016, investigators concluded that the Malaysian aircraft was hit by a Russian-made Buk-9M38 series missile fired from rebel-held territory in eastern Ukraine, where Russian-backed separatist militias and government forces were engaged in fierce combat. Moscow denies charges that it supplied the missile system which brought down the plane.

The Netherlands and Australia announced in May 2018 that they would hold the Russian state legally responsible for the downing of MH17. Dutch media later reported that Malaysia was only notified of the politically sensitive move just prior to its announcement over fears that it would relay those intentions to Moscow through diplomatic backchannels.

Fauziah claimed that the JIT’s practice of keeping Malaysia at a diplomatic arm’s length helped to validate perceptions of Russia being politically scapegoated by the probe, a position that Mahathir repeatedly affirmed to the bewilderment of public opinion in the Netherlands, which lost 198 of its citizens in the disaster, and elsewhere.

The former Malaysian envoy did not dispute Russia’s support for the rebels in eastern Ukraine, though she claimed Moscow’s own version of events were not examined by the probe. “Because [the JIT] were apportioning blame from the beginning, I think the Russian side should have been given the opportunity to explain themselves,” she said.

“You’ve already blamed Russia and you have already started to enforce sanctions. Why are you doing this when you don’t know yet? That was what I told them,” Fauziah said in reference to economic sanctions levelled against Moscow by the United States and the European Union on July 29, 2014 over its role in the MH17 incident.

“From there I noticed there was this ‘you are not my friend’ kind of feeling. You can see it’s a geopolitical game already. Immediately, you have all finger-pointing to Russia. They were taking advantage of the victims of the incident to come up with something they’ve been waiting for, an opportunity,” she claimed.

It is unlikely that those sentiments will inform the Muhyiddin administration’s stance toward the trial, which is expected to continue throughout 2020. Despite Mahathir’s contrarian position, his government had formally endorsed the JIT’s findings while calling for transparent scrutiny of existing evidence and the gathering of additional data.

There is at least one indication that the new Malaysian government seeks to quiet internal critics.

Colonel Mohd Sakri Hussin, the chief negotiator of a Malaysian team that covertly entered rebel-held territory in eastern Ukraine to retrieve MH17’s flight data recorders and victim remains, had been due to speak at a documentary screening in London on March 3.

Sakri and Mahathir appeared in the online investigative documentary MH17 – Call for Justice and the former had travelled to the United Kingdom to take part in the event’s panel discussion.

Event co-organizer Bonanza Media confirmed to Asia Times that Muhyiddin’s newly-appointed government requested the colonel not to address the gathering, to which he complied.

None of the four suspects were crew members of the vehicle that fired the missile, but are believed to have colluded with those who carried out the attack.

Girkin, a former Russian FSB security service colonel, is the most prominent figure named and served as minister of defense of the self-declared breakaway republic of Donetsk at the time of the Malaysian aircraft’s downing. Kharchenko is believed to have commanded a pro-Russian separatist combat unit.

Prosecutors claim Dubinsky was employed by Russia’s military intelligence agency (GRU) and was in regular contact with top Russian officials as head of Donetsk’s intelligence service. Pulatov is said to have been a GRU special forces former soldier and deputy head of the same intelligence agency.

None of the defendants, whom are all at large, are expected to present themselves for hearings at The Hague. It is not clear whether the accused will send lawyers to represent them or if they intend to participate in the hearings by video link. Both Russia and Ukraine do not permit the extradition of their own citizens.

Fauziah told Asia Times that she considers evidence brought against the four fugitive suspects so far to be inadequate, and has doubts about the veracity of intercepted phone calls released by Ukraine’s SBU security service that purportedly incriminates them. The former envoy also questions Kiev’s culpability in the incident.

“I was taught as a foreign service officer to be very non-aligned. Non-aligned means not on the side of Russia, but on the side of the truth. Show us proof that the Russians did it. If they can prove it, then so be it,” she said. “Now that the trial has started, we look forward to it being done fairly as many are watching.”

Court Trial in The Hague: Is Malaysia’s Position on MH17 Tragedy Shifting?